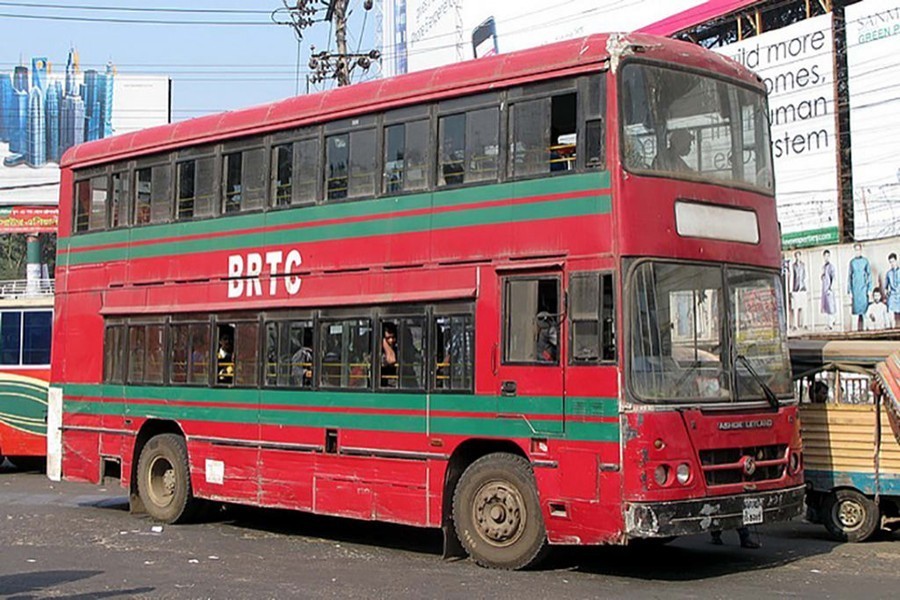 The state-run Bangladesh Road Transport Corporation (BRTC) has been limping for long. Makeshift arrangements to revamp the state-run transport agency have done nothing to either improve its services or maintain its fleet of vehicles. At a time when private transport operators are doing fine capitalising on the inadequacies of the existing public transport system, the BRTC is in a shambles despite the facilities it enjoys as a state agency. It is here that this outfit is no different from its siblings-- the other state-run entities.

The question why the BRTC is doing so badly is not difficult to find out. For decades, it has been running its fleet of ramshackle buses -- single and double-deckers -- much to the shock of passengers and also the onlookers. One doesn't need to ride them to experience how pathetic and distressing these could be. Recently, there were a few reports in the newspapers that mostly attempted to highlight the narrative of the failing state entity. The main issues that came out were: leasing out the buses, poor or no maintenance, improper procurement, short economic life of the buses, and last but not least, corruption. It is well known that private bus owners and operators have always vehemently resisted the operation of BRTC buses and forced to marginalise the services across the country. The BRTC has been incurring losses for the past four financial years. Its officials list the burden of salary of their staff and failure to include buses in their fleet as primary contributing factors that has turned the state enterprise into a loss-making entity. Losses incurred by the corporation are only indicative of its overall ailment. But the reasons for losses, as the recent newspaper reports have pointed out, are clearly utter mismanagement, lack of monitoring and wrong decisions. Data presented in a local English daily show that the corporation was running on losses from 2016 until December last year. According to data quoted in the reports, the BRTC's losses amounted to Tk 40.73 million in 2016-17, Tk 20.93 million in 2017-18, and Tk 10.47 million in the current fiscal till December.

That there is something grievously wrong with the procurement and maintenance of the buses is not unknown even at the highest level.  The road transport and bridges minister once expressed his shock saying buses imported by the corporation become rickety too soon. 'Ultra modern vehicles arrive and after some days these become rickety with broken window panes,' he said. According to reports, between 1999-2001 and 2006-2007, the BRTC procured 646 buses and minibuses. Of these, 50 double-decker buses from Sweden went out of order within six to seven years, although their normal economic life was 20 years. Currently, only one of these buses is in operation and 49 are under heavy repairs since long. Out of 30 Chinese CNG buses, only 15 are now in the BRTC fleet while only one is in operation and 14 under heavy repairs. Out of around 400 Indian buses, only 132 are now on the roads.

Between 2009-2011 and 2012-2013 fiscals, the BRTC purchased 958 buses including 275 Chinese CNG buses, 255 Korean CNG, 88 AC and 50 articulated buses from India. According to the corporation, at present 173 Chinese CNG, 117 Korean CNG, 10 Indian AC and eight articulated buses are in unserviceable condition. Till date, the corporation reportedly has a total of around 1,500 buses in its fleet, of which 921 are in serviceable condition, 360 were under heavy repairs and the rest written off.

Ruining the buses well before their economic life has become so characteristic of the BRTC that seeking a remedy will require a total overhaul of the entire corporation. While lack of professionalism is attributed by observers and transport experts as the key malady afflicting the corporation, the fact remains that there are specific areas to work on. Bringing professional aptitude is a bit too ambitious a proposition. This is to say, the areas have to be first identified including the flaws, drawbacks and constraints. It is here that procurement decisions on the right type of buses should figure as supremely important. Equipping the workshops with machinery, equipment and skilled manpower must go hand in hand. It has been gathered that the BRTC workshops are in a bad shape. Short supply of equipment and spare parts has rendered them incapable of coping with the frequent repair and maintenance needs, worsened further by a dearth of skilled manpower. There are complaints that lack of monitoring is largely responsible for less than expected earning. These are but a few of the areas and the corporation itself should be better placed than outsiders to pinpoint more areas to work on.

Adding more buses to its fleet is in no way a viable recourse for BRTC to overcoming its limitations and mending the wrongs. All that is required is a concerted move to revamp the corporation keeping in mind the operational deficiencies and policy flaws that have plagued it. Observers also hold that a PPP model, if worked out methodically and efficiently, may serve the corporation better.