Graduation to the bullet train era 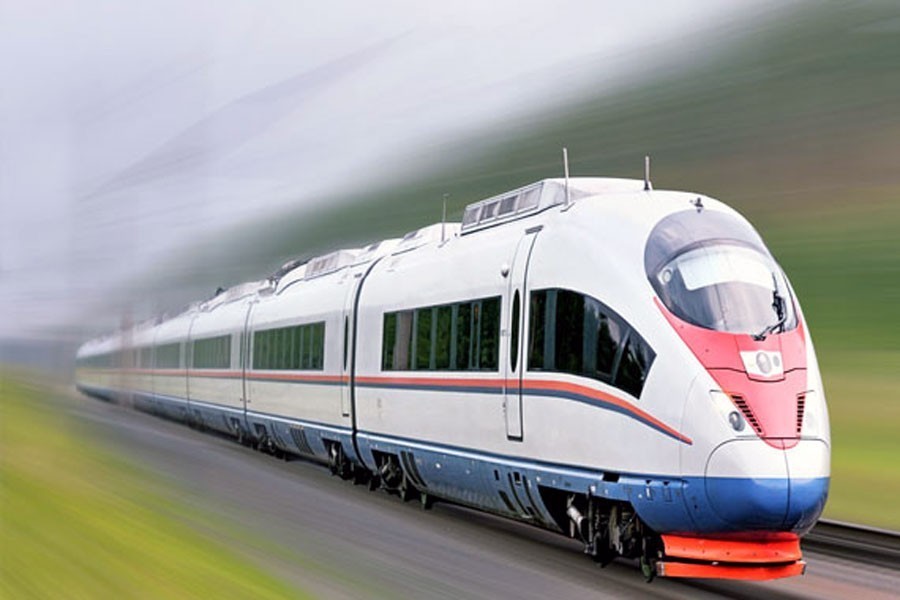 The plan for cutting the Dhaka-Chattogram railway travel time down to 1-2 hours has been heard a couple of times in the past. Those promises were made during the tenures of other governments. To the dismay of the eagerly waiting travellers, the grand projects have not gotten off the ground.

News of a similar pompous project has grabbed headlines of the print media. Touted as 'high-speed', the train is expected to cover the distance between the capital and the port city in 73 minutes.

However, in this case the route will be shortened a little. The proposed travel is set to leave out the curve centring the Brahmanbaria station. Moreover, the train will travel across Narayanganj, just opposite the present Dhaka-Tejgaon-Tongi segment. The 227.3 kilometres (km) route will have 04 (four) stations in total between Dhaka and Chattogram. They are Narayanganj, Cumilla, Feni and Pahartoli. The measures will shorten the train's route by 90 kilometres comprising the present length. It will run at a speed of 300 kilometres per hour. The speed, naturally, elevates the rail to the club of pure bullet trains.

Experts have their reservations. A few of them have found 300-km-hour speed of the proposed train a nearly absurd idea. In the present railway set-up, when reaching up to the speed of 100 km/hour appears to be a Utopian dream in the present realities, the coverage of nearly 227.3 kilometres in one-plus hour might emerge as quite unachievable. Given the existing population density, with newer habitats continuing to increase in the railway track areas, the plan for launching electrically run trains remains stalled.

In such adversities, the smooth operation of a super high-speed train could reasonably be brought into question. The mere thought of clearing the rail track area of encroached establishments gives one shudders. But the high-speed trains are required to move on tracks having sufficient width on their two sides.

The Bangladesh Railway (BR) is said to have begun acquiring the necessary land. The size of the land required for the movement of the proposed high-speed train is 668.24 hectares. As has been learned from the media, the proposed train will have double-track lines which will be elevated in greater part. The track is known as ballast-less one. It is set to be operated through electric traction.

Much to the ignorance of the general passengers, feasibility study on the grand project has reportedly been completed already. Work on the detailed design for the train is underway.

The picture nowadays offered by the railway sector is far from being encouraging. Although the Bangladesh Railway now operates 360 passenger trains on routes having a length of 3,000km, many of them perform miserably. Plagued by lots of deficiencies in providing service to passengers, the trains no longer can draw passengers as before. When it comes to travel-time, sitting arrangements etc, long- and medium-haul buses have weaned off a sizeable number of long-habituated railway passengers.

Besides, over a dozen railway stations have closed down across the country in the last two decades. The reasons included vacuum created by a lack of expert staff after their retirement. The few newly recruited hands proved too inept to man a station properly. It has only added to the sufferings of the passengers. As there were no arrangements to train up new staff, the running of the stations eventually collapsed. One fine morning, stations were declared shut --- to the great resentment of the passengers. The denouement that unfolded witnessed even the insolvent passengers travelling by buses on fares much higher than those of the trains.

In the present lackadaisical state of the country's railway sector, experts have already come up with their doubt about the relevant authorities' capability to implement the massive project of high-speed trains. It's true that over the last two decades, Bangladesh Railway has introduced a number of brand new inter-city trains. They are passenger-friendly and fitted with modern gadgets. These trains cover the East and West Railway Zones of the country. Moreover, these long-distance trains are speedier than the regular Express ones. Forty to fifty years ago, the now-defunct Dhaka-Chattogram non-stop Ulka would take eight (08) hours to reach one destination from another. These days, around five trains take 5-and-half to seven (07) hours in travels between Dhaka and Chattogram. In the meantime, the once famous mail trains have veritably degraded to the 'local' ones. A few have taken out of operation. The inter-city trains running on Dhaka-Rajshahi and Dhaka-Sylhet routes have tales of both success and failure.

In a cursory look, the railway sector has undergone a few drastically changed phases. But in essence, barring some outward shine, interior comfort and a little cut in travel time, the railway sector remains beset by problems which have been plaguing it since the 1970s. That period had carried the legacy of the earlier Bangladesh, then British Bengal, Railway that started on a short rail track between Chuadanga and Kushtia. The year was 1862.

The present railway set-up and the service began declining sharply in the 1980s. The following period was marked by myriad drawbacks, the shortage of sufficient manpower being one of them. It also witnessed an appalling dearth of discipline, sloppy operation by both aging and rookie crew and rampant irregularities. The biggest challenge to the Bangladesh Railway at the moment is the lack of professionalism. Many blame it for the recent spurt in big and small accidents. With these long-festering problems obstinately in place, executing a project of operating a high-speed train warrants grasping of the ground reality.

Unlike Japan, France, China or India, independent Bangladesh has a brief history of its railway. It's just coming out of the formative stage of the sector. Going straight for a super high-speed train is a brave attempt. If introduced without hiccup, the high-speed train will go down in Bangladesh history as a great national achievement. China has lately announced the preparation for introducing its 600 km/h magnetic levitation train. That country can do that, because it has a rich legacy of bullet trains.

Saving rivers is a quest for our survival

Of viruses, virology and novel corona