Enduring relevance of May Day 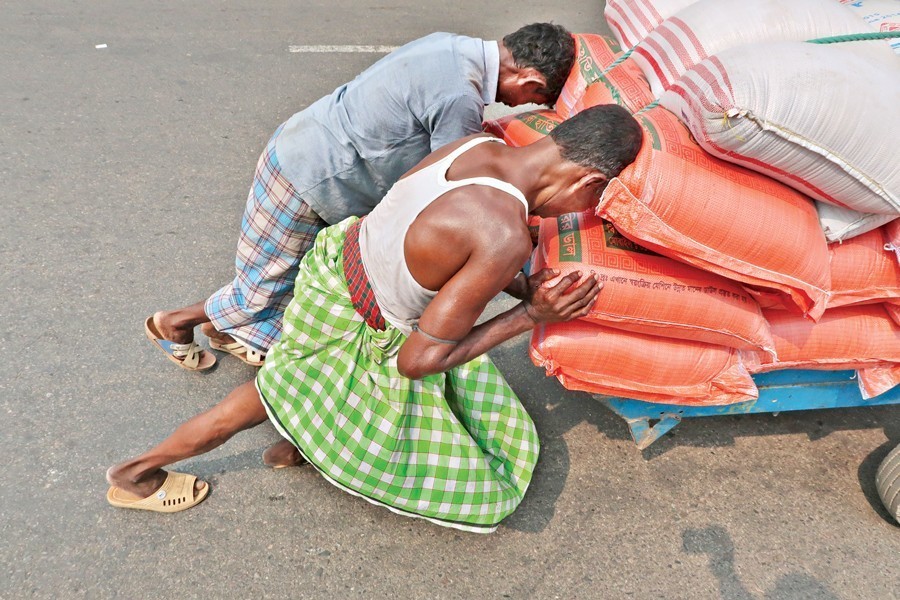 Though a large number of industrial units have paid the wages and salaries for March and some have also paid half of the salaries for April before Eid-ul-fitr holiday, workers in many factories have not got their dues. Though some factories also paid bonuses along with monthly salaries and wages, many of the workers are not lucky to have their due benefits. Lack of comprehensive database and updated reports make it difficult to know the real status of salary and wage payments in the factories across the major industrial zones in the country. Though the statistics available with the Industrial Police is incomplete, it is the main source about the status of wage payments. Ready-made garment (RMG) industry, which is always in news due to non-payment of wages of some units, leaders claimed that all the factories except a few have cleared the workers' dues.

Non-payment and partial payment of the workers' wages by some units before the Eid holiday is a regular and a pathetic  experience that the country witnesses  every year. What is more problematic is the delay in clearing the monthly wages. In many units, workers have to wait for two to three weeks of the running month to get their salary of previous month. This kind of delay exacerbates the problem during the festival time and creates disappointment and anger among the workers and sometimes fuels some unrest.

Thus clearing the dues of the workers especially on the eve of Eid festival is still an issue with the industry. The situation has aggravated in the last two years due to Covid. With the normalcy returning to business and economic activities this year, there is an improvement regarding settling the workers' payments. Nevertheless, the problem remains as not all factories are in a position to settle the dues for various reasons including losses in business, reduction  in profits and declining outputs.

Whereas non-payment or partial payment of industrial workers' wages draw media attention, the same happening in many other sectors goes almost unnoticed. Take the case of thousands of security guards, caretakers and domestic helps working at the apartment buildings and houses in the capital city.  A large number of them are yet to get the monthly salaries before the Eid as building and house owners rely on monthly service charges and house rents to pay their dues. They do not want to draw from the reserve funds or collect some bills in advances. So, in many cases the caretakers and guards get their salaries after  Eid though it was possible to clear their dues in advance. As they are mostly employed under informal arrangement, there is no one to tell the tales of their deprivation.

The people working in the informal and semi-formal sectors have little scope for redress when deprived of their due wages. Most of them have to depend on the willingness and whims of their employers.  They are mostly underpaid and oveworked in many cases. The guards have to work minimum eight hours in a shift and many of them usually do two full shifts daily at two different places. Thus after 16 hours of work, they have little time for themselves and their families.  Inadequate sleep and lack of nutrition make them vulnerable to diseases.

Also, consider the example of thousands of boys who work as assistants in different shops and market places.  They are nothing but child labourers. As their families are poverty-stricken, they are forced to work instead of going to school. These children, mostly of ages between 10 and 15, are poorly paid workers and live in unhealthy places. They are regularly bullied by local goons. Some ultimately join the miscreants and get involved in criminal activities including drug abuse.

There are many other sorry tales of hundreds and thousands of workers for whom Eid is little to cheer.  Thanks to the various types of charitable work conducted by individuals and organisations, some of these workers and labourers get some foods, clothes and money during the festival.

All these are a strong reminder that the historic May Day is still quite relevant in Bangladesh. And today is the first day of May, known as the International Workers Day, the day of workers' solidarity. Back in 1880s, this day emerged as an outcome of the worldwide struggle of workers for limited working hours and decent working conditions. It was in 1889 when an international federation of socialist groups and trade unions designated May 1 as a day in support of workers, in commemoration of the Haymarket Confrontation in Chicago in 1886. In that year beginning on May 1, there was a general strike for the eight-hour workday. On May 4, the police acted to disperse a public assembly in support of the strike when an unidentified person threw a bomb. The police responded by firing on the workers leading to the death of seven police officers and at least four civilians; sixty police officers were injured, as were 115 civilians. Hundreds of labour leaders and sympathisers were later rounded-up and four were executed by hanging, after a trial.  Thus the protest spread across various parts of the United States and there were police atrocities to curb the workers' protests. Protest also spread to many other parts of the world which called for solidarity of the workers and demanded eight-hour workday as well as regular payment of wages and better factory conditions.

More than 130 years after the Haymarket incident, conditions of many workers and labourers in Bangladesh as well as many other parts of the world have not improved much. That's why there is a renewed call for limited working hours, healthy working conditions, timely payment of wages, regular adjustment of wages with inflation and ultimately decent jobs for all. Without ensuring all these, economic growth of Bangladesh will not be inclusive and non-discriminatory.