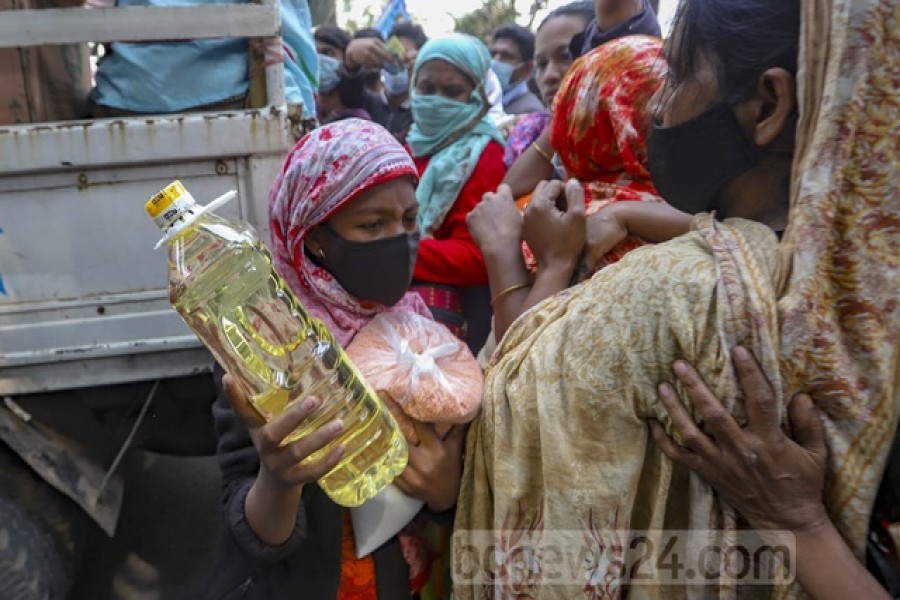 In describing the plight amid which Bangladesh presently discovers itself, the phrase that could aptly be used is 'triple whammy'. The expression is rarely used. But there are no suitable terms to describe the country's present conditions. The series of the countrywide woes began lately with the heated kitchen market, which has started affecting people in the fixed income group in recent months. The market-centred malady was dominated by the non-availability of essentials like the edible oil. The crisis, however, is being eased, with Indonesia --- one of the largest palm oil producers in the world, preparing to relax the export restrictions imposed on palm oil. Experienced people find little reasons to feel delighted. They are aware of how many such magnanimous decisions made by the exporting nations have gone awry in the past. It is the crooked 'third parties' in an affected country who normally spoil these noble initiatives. With the Eid-ul-Azha just two months away, another phase of demand for edible oil is set to dominate the list of the priorities of kitchen items.

Enter the abrupt ordeal of the flash floods caused by excessive rain in a couple of upstream districts in India's northeast. Being located downstream, ripe and half-ripe paddy in the affected areas of Bangladesh had already borne the direct impact of these flash floods. Lately, they have struck back with fresh vengeance.  This time more areas in Bangladesh including the Sylhet city got flooded. The Surma and Kushiyara fed with the waters of Barak in the Indian part flowed above danger level.

The latter two scourges are highly evident at the macro level.  The third strike of the triple whammy had long been in the making. It soon began eating away at the vitals of Bangladesh in its broader economic sector. Prompted by the fallout of the Russo-Ukrainian war, followed by anti-Russian sanctions and accompanying different types of global pseudo-diplomacy, a series of developments continued to occur. Those were outside the domestic realities of Bangladesh. The 'developing' status- aspiring LDC country found itself in a quandary. Evidently, the country had fallen victim to a series of insidiously creeping bitter realities. These murky developments at one moment pushed Bangladesh into a real crisis, the kind of which it hadn't passed through in the 21st century.

With Bangladesh lately passing through the second bout of the now-destructive flash floods originating across the border, it now has also to deal with the pre-monsoon swelling of its own north-eastern rivers. The recent excessive rains have lately aggravated its floods which had led to extreme forms of hardship and material losses for the farmers. Since the onset of the second-time flooding that hit the greater Sylhet and Sunamganj districts in the main, newer areas are found being submerged by flood water. Apart from the newer tracts of Boro paddy fields, this time the breadth of the sudden deluge includes villages, small markets, schools and other institutions in the semi-urban areas. The flood forecast and warning agencies concerned warn of deterioration in the overall condition. Seasoned experts dealing with floods and their impact on people's life and livelihood stress the urgent need for taking succour to the affected villagers. As seen in the onslaught of such calamities, what the flood-stricken people may be in need of this time around are dry and easy-to-cook food and drinking water. In cases of the prolonged stay of fetid water in the inundated homesteads and around flood shelters, rushing medicines to the affected, for prevention of diarrhoeal diseases deserves utmost urgency.

In case the isolated flood incidents coalesce into each other and become an ominous whole, the whole northern part of the country is feared to be standing in way of an unforeseen calamity. This fast worsening flood may affect Bangladesh badly, though for a brief period. Meanwhile, with the small South Asian nation being visited by the impacts of a global economic slump, and facing confusing situations, Bangladesh ought to tread in extreme caution. Being caught in the 3-pronged dilemmatic situation, one involving striking a balance between the Russia-India and, remotely, China dominated bloc and the NATO-EU one, the nation is faced with a critical diplomatic-cum-economic choice. In this exercise of making the right and pragmatic decisions, a small blunder might lead to a series of woes for Bangladesh eying its eventual LDC graduation.

As long as the EU keeps its duty-free GSP (under EU's EBA- Everything But Arms- scheme) facility for Bangladesh, most likely until 2026, the country might remain tension-free. But Bangladesh will be deprived of the EU GSP (Generalised System of Preferences) after its LDC graduation. In that case, the country will be entitled to the privilege of GSP Plus. It will require certain 'uncomfortable' conditions to be met. The so-called new GSP will make it imperative that Bangladesh follow some core issues like "climate protection, and good governance". The new GSP is also set to "lower the thresholds for exports", which Bangladesh businesses fear may limit the country's gains from the 'GSP Plus' in key export items like apparels.

Against the murky backdrop, made worse by the Ukraine conflict polarisation, Bangladesh may discover itself left in the lurch --- maybe at the dictates of the EU lobbyists. Or else, it may have to lean towards either bonhomie with the Russia-India or the China camp or facilitating its enjoying the unavoidable EU-based economic gains --- with a few small revisions made to the GSP Plus conditions. Aggressive economic activists, however, are in favour of no-frills competitions with the rival exporters.