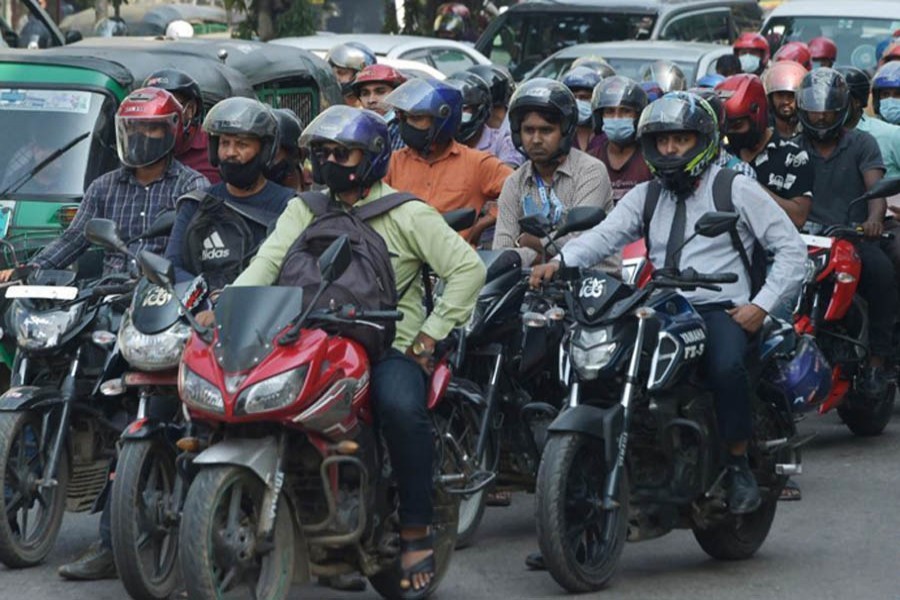 Though it sounds rather trite to say that nothing happens in this world without a cause, it is still  the case that people often forget this commonsense maxim. Consider the recent furore over the rising number of motorbikes on the country's highways. And the concern so raised by different well-meaning quarters is also not without substance. For one cannot deny the fact that even during the last Eid-ul-Fitr, these  two-wheelers were seen in large numbers on the country's highways on their way to the different outlying districts. Evidently, the passengers of those motorbikes were Eid travellers bound for their country homes to celebrate the Eid. Sadly, many of them could not make it to their intended destinations as their chosen transports met with deadly road crashes leading to deaths and injuries. According to reports, some 106 people lost their lives died in so many accidents, during those fateful journeys.

So, what should be the way of out of this mess and the deadly road crashes attributed to these two-wheelers?  Ban them from the highways and even from the capital and other larger cities of the country where they are notorious for creating huge traffic gridlocks, as many would like to suggest?

But tragic accidents on the highways are not something new in the country and they have been happening endlessly without a let-up even before the motorbikes came out in a big way on the country's highways.  But we have never heard any one suggesting that the big vehicles like buses and trucks be prohibited from the highways!

Even so, the Bangladesh Road Transport Authority (BRTA), which looks after the issue of giving licence to vehicles plying the  roads and highways,  did indeed recently come up with a recommendation that the movement of the motorbikes be restricted, especially, n the country's highways.

Obviously, such a suggestion coming from as important a government body as the BRTA is a serious matter. But before such a huge statement was made, did those concerned give serious consideration about why the number of motorbikes saw an exponential increase in recent times? Is it that the young people-in fact, the overwhelming majority of the motorbike riders belong to the age group defined by the UN as the youths-have taken a sudden fancy to these magnificent-looking two-wheelers as a passing fad? Definitely not. In fact, going by the BRTA records, out of more than 5.0 million vehicles given registration by this transports regulatory body since the country's independence till last year, around 3.5 million were motorbikes. However, as often alleged, there are many more unregistered motorised vehicles including, of course, motorbikes, that are using the country's roads and highways.

Be that as it may. The fact still remains that a large number of these youths are riding motorbikes not for pure amusement. On the contrary, they are using their vehicle for more serious purposes such as commuting between their workplaces. Also, in a recent development, jobless youths are using these two-wheelers as a source of earning. And why it is so is quite plain. There are more unemployed youths in the country than there are jobs to absorb them. Is it not amazing that these innovative youths have found out a new means of self-employment rather than taking out large protest marches demanding jobs from the government! Should these youths not deserve due appreciation, rather than reproach, from all quarters concerned for such enviable talent at getting self-employed in this manner? And, lo, now we have a new revolutionary answer to such a hugely complicated issue of transporting people from one place to another by way of ridesharing using modern digital technology.

While appreciating the development, one has also to face facts. Had the existing public transport facilities in the country proved adequate to match the ever-rising demand for the service, there would be no need for filling the void (of transport-related service) by these frail-looking, risky motorbikes. And let us also not forget the tyrannous as well as anarchic regime ruling supreme in the country's privately-run transport sector. Especially, before each big Muslim religious festival, the Eid-travellers are virtually held hostage to the whims and caprices of the private transport operators. And it is exactly against this background that homebound motorcyclists descended in droves on the country's highways. So, quarters annoyed with the so-called 'motorbike menace' need to have a rethink of the whole gamut of issues before coming to any quick conclusion.

As with all other motorised transports, the problem of registration also lies with the motorbikes. The BRTA itself will have to take some responsibility on this score. The highway police will be required to mount stronger vigilance as well as patrolling to combat delinquency on the roads both by the motorbikes and other regular transports. At the same time, wearing of standard helmets certified by the Bangladesh Standard and Testing Institution (BSTI) has to be made mandatory for all motorbike riders. What is important here is to look at the issue in the light of the socio-economic reasons behind it. And there is hardly any point making a whipping boy out of these bikers.

Who's behind flight of dollars?

A bowl of rice, a dash of salt and some green chilli

Bailing the railway out of atrophy