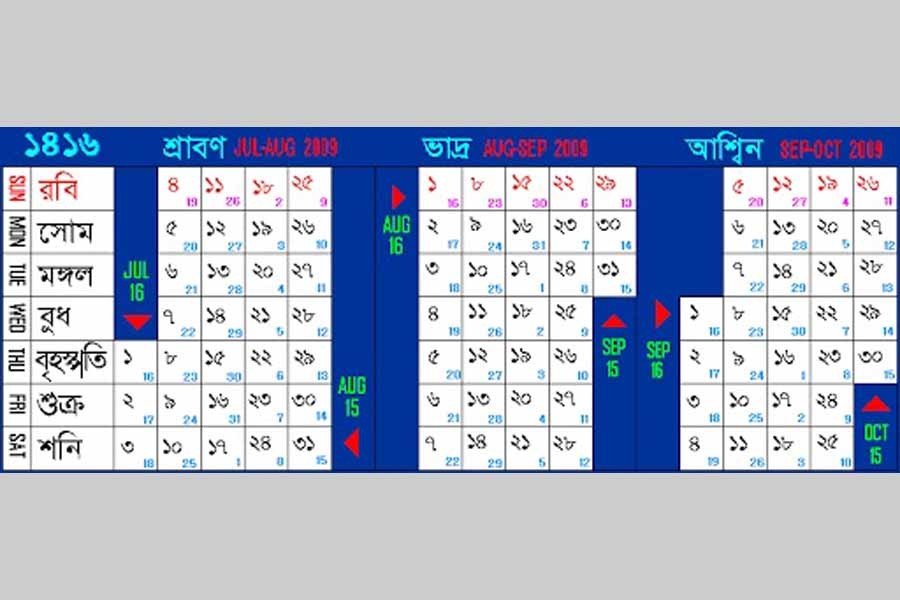 The High Court has issued a rule directing the cabinet secretary to explain why indifference to use of Bangla date alongside English to mark the national days would not be considered illegal. Indeed, here is such a sensitive issue that the nation has missed and failed to respond to. The nation celebrates Ekushey February but not Atoi (8th) Falgun, March 26th not Baroi (12th) Chaitra, December 16, not Pahela (1st) Poush and so on. How contradictory to the spirit of Bangaleeness and love for the language! Atoi Falgun could be the rallying cry for the Bangalees but somehow or other it has become Ekushey February. One of the reasons was obviously the discrepancy in the Bangla calendar. Although it is a solar calendar, the smaller defects it had was not corrected. Now that this has been corrected with a minor adjustment for Falgun, like February, on the Bangla calendar, the Bangla dates will remain same to correspond with the Gregorian calendar. According to the adjustments made, the first six months up to Aswin will be of 31 days and the next five months will have 30 days and Falgun will be of 29 days but 30 days will comprise the month in the leap year.

Even if Bangla dates get official recognition, there is little chance of those prevailing over their English counterparts. But it is unwise to relegate those to the back burner in preference for English dates. At least some diehard Bangalees will take heart and feel encouraged to call the national days by the Bangla dates. Even if it does not happen, at least both dates should be given equal importance in honour of the language for the love of which people embraced martyrdom.

Every year, it has become rather ritualistic to go for rhetoric when February (mind it, not Falgun) approaches. The media, particularly the print media, in the past routinely published pictures of the random use of English names for organisations, shops and even educational institutions, use of English in advertisements, bill boards and hoarding in order to draw the public's and the authority's attention. This year even such an attempt is so far conspicuous by its absence. It seems a general apathy has grown among the people towards Bangla. A sense of frustration is at work after so many years. Even learning Bangla language well is no longer a priority. After all, it does not help getting a job, rather English knowledge gives someone an edge in the employment market.

The cell phone companies are to a large extent responsible for downgrading Bangla as the messages they randomly serve unsolicited in English letters but in Bangla words and sentences. Young people have caught up with this cocktail language, indicating a drastic fall in the standard of Bangla. There are few areas where sign boards of establishments and advertising boards are not replete with wrong spelling and inaccurate Bangla. This is all because, apart from the academics, the majority of the people are fast losing touch with Bangla literature. In day-to-day discourse the use of well-framed sentences are hard to come by. A rot has set in the cultivation of language.

The problem has been further compounded by the lack of any attempt to make Bangla as a powerful lingua franca. Instead, the nation seems to have reconciled helplessly to the inevitability of English taking this onerous role. Onerous, because in English too the knowledge is not only inadequate but also at the level the half-educated people can master it. Digitisation ought to have made it incumbent on the linguists to have invented a set of synonyms, terminology --or even loanwords where they were convenient --of scientific and technological terms so that the common people could find those agreeable and familiarise with easily. This has not happened at all. So the majority of people will not be able to acquire the digital skill -a condition so essential for deriving digital dividends of the fourth industrial revolution (4IR).

When small omissions in language proficiency can prove costly, a glaring anachronism and omission like non-identification of the nation's red-letter days with Bangla dates expose the gulf between protestation made in public and actual love for the language. It took a man named Md Lashkar Ali from Damurhuda, Chuadanga to make an appeal to the High Court in favour of introducing Bangla date alongside English ones. No details of the appellant could be gathered but he must be hailed for the undertaking. He has drawn the nation's attention to a highly important issue -one that has escaped attention of scholars, politicians, academics and people of letters in different areas of society.

English may be an international language but when the nation celebrates its Lnguage Martyred Day, Independence Day, the Victory Day and the like, there is -and should be -- no compulsion to get it recognised by English dates. The nation could easily have the Bangla dates for those. But now that it has not happened, at least the Bangla dates can be accommodated with English dates and gradually given more importance to replace the latter. If spellings of cities and towns can be changed to Bangla phonetic pronunciation, there is no reason why this more important matter should be left unattended.

Land use in rural areas

Lockdown in the context of Bangladesh