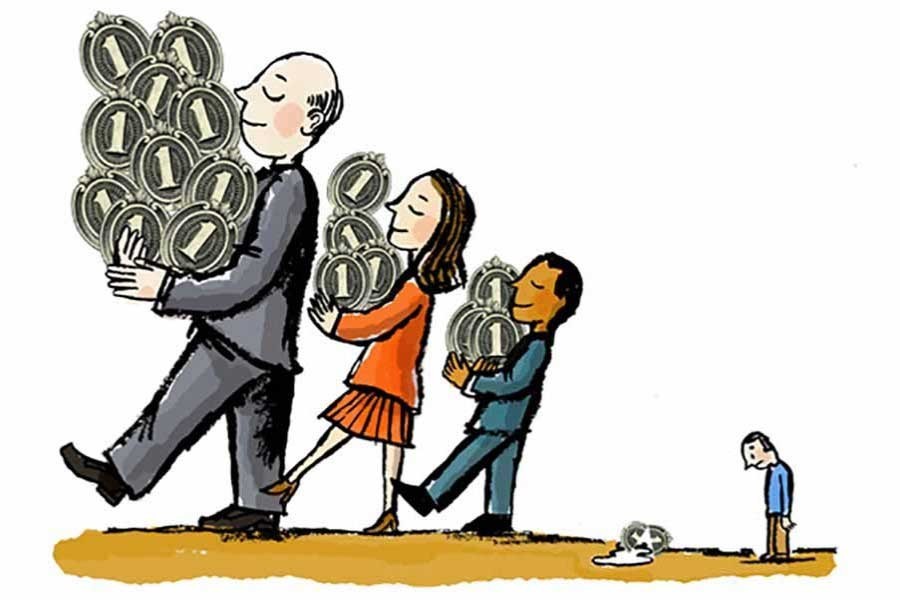 The Oxfam report on global inequality published only days before the World Economic Forum in Davos, Switzerland has once again confirmed that the gap between the rich and poor is widening. As reported, 2,153 billionaires the world over now have in their possession more wealth than 4.6 billion people comprising 60 per cent of the population on the planet. The report finds the inequality incorrigibly entrenched and vast favouring the rich so much so that the number of billionaires has doubled in the past decade.

People have come across similar shocking reports in the past, one of which claimed that only one per cent of the planet's inhabitants have at disposal 50 per cent of the global wealth and the rest 99 per cent have to make do with the other half of wealth. Yet this equation hardly makes the picture of inequality clear. What has been happening ever since the global economic crisis of 2008 is rather striking: the top 1.0 per cent's share following economic recovery in 2013 has been in an upswing. In 2016 alone 2.3 million new dollar millionaires were created, taking the total to 36 million. By that time the number of millionaires rose three times the 200 figure, according to Credit Swisse.

Since then nothing has happened to hamper the trend. Even a country like Bangladesh thus made news last year for becoming the land of the fastest rate of growth of the superrich or ultra-rich possessing at least $30 million or Tk 25 billion. This explains why the country's GDP growth is catapulted consistently at around 8.0 per cent.

A knee-jerk reaction from governments the world over to a global economic downturn always favours the rich and superrich. At the lowest level of society, the capital is physical labour but it is the moneyed people who invest in industries and businesses to infuse momentum into a moribund economy. In the bargain, this privileged class secures its interests well beyond a justified share. In this process capital gains continue to add in leaps and bounds. Working hands are doled out a meagre share of the wealth accretion. This is how inequality has now reached an alarming level. So alarming is it that the Oxfam and other civil society organisations and activists have gathered under an umbrella called Fight Inequality Alliance.

The Oxfam has not minced words so far as fighting inequality is concerned. It has suggested 'deliberate inequality-busting policies' that governments ought to pursue in order to bringing down the gap between the rich and the poor. Bill Gates, who for long has been the richest man and now finds himself in the second position, recommends realisation of more tax on capital gains. Indicating the anachronism of taxation between salaried people and capital gains in America -37 per cent on the former and no more than 20 per cent on the latter -he advocates bringing down the high rate on the former and raising the rate on the latter.

In this connection, the Oxfam calculation is also very significant. It claims that just 0.5 per cent extra tax on the richest one per cent for the next 10 years in the world can make a discernible transformation in areas like elderly and child care, education and health. How? The extra tax will be equal to the investment needed to create 117 million jobs in those sectors. In a world that is fast aging, more caregivers will be in demand in the future, the organisation argues.

Now, the Oxfam's findings are even more remarkable where it has estimated the unpaid care work women and girls perform. They put in 12.5 billion hours of unpaid care-giving every day and the work is worth $10.8 trillion a year -more than three times the net value of the global tech industry. Clearly, this size of an unpaid work is directly or indirectly responsible for much of the economic growth. The Oxfam terms it a 'hidden engine' that helps the wheels of economies and businesses moving in all societies.

Women and girls are the worst sufferers under the present economic system, because their contribution goes unrecognised. Although they spend billions of hours cooking, cleaning and caring for children and the elderly, they in most cases enjoy no financial reward. This is exactly how the convoluted system of economy has left the lion's share of wealth gains for the rich and its cyclic order further favours them depriving the poor of the opportunity of coming out of the poverty trap. Creation of the superrich at a faster rate does not at all do economic justice and help social integration. Economic policy should be inclusive and by all means its main aim ought to be rational distribution of wealth with particular emphasis on lifting the backward and underprivileged segments of the people.

So the governments need to invest more in building enough infrastructures where the poor can have opportunities to better their conditions and living standard. If Bill Gate's and Oxfam's suggestions are taken, there should be no problem for finding the required money.

How Bangladesh is outperforming India