A star's fall from grace? 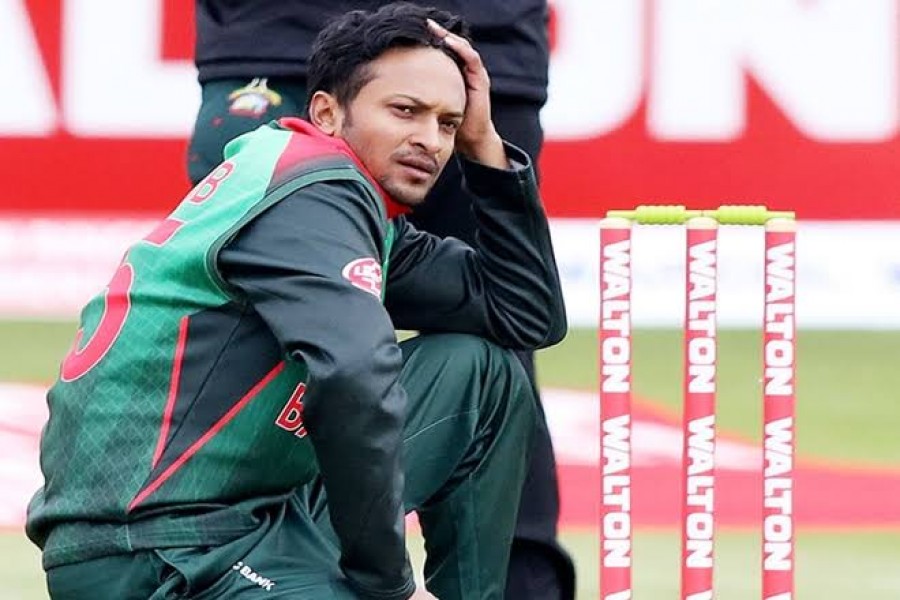 The two-year ban on Bangladesh ace cricketer Shakib Al Hasan, one year of which to be suspended depending on his conduct during the first half of the term, has dealt a severe blow to the cricketer, his team and the country in general. Shakib is not merely a cricketer, he is an icon and idol whom the country's youths follow and take inspiration from. He is the only cricketer who still holds the number one ranking in one-day international (ODI), number two spot in T20 ranking and number three position in Test ranking in the all-rounder category. He even had the rare distinction of holding the top ranking in all three formats of the game.

Of all sports and games, cricket is the one in which the country has been competing at the highest level. A sports personality of Shakib's ilk alone has an unmatched brand value. He is an embodiment of 'a dream come true', of 'hope and aspiration realised' for the nation hungry for success in the sporting arena. Emotions and passions run amok when this performer extraordinaire competes against cricket teams from different countries. They look forward to his delivering against all odds because they are convinced he cannot let them and the country down. True to his rating as a super sports personality and a role model of home fans, what a performance he came up with in the last ODI World Cup championship in Englad!

So the way Shakib conducts himself both on and off the field means a lot to the country and its young generation. This iconic cricketer led a protest only days before Bangladesh team would have been ready for their much-awaited India tour, throwing it into uncertainty and by extension the country's cricket into turmoil. However, the case in favour of the protesting cricketers and cricket was so strong that the Bangladesh Cricket Board had to relent to the demands. In fact, the protesting cricketers did not only bring into focus the inconsistent match fees and facilities provided but some gross anomalies prevailing in domestic cricket. Indeed the move was orchestrated in the interest of the country's cricket in the broad sense of the term.

There was not a single unjust demand the cricketers put forward. But the timing of placing the demand that came in the shape of an implosion caused many to raise an eyebrow. At a time when the members of the touring team should have been at the peak of their physical and mental forms, their attention got diverted to an unprecedented protest strike. Mercifully, the disputes were amicably settled with the BCB conceding most of the demands. Match fees and other financial benefits for cricketers of all categories under central contract were raised. But it is too early to say how the standard of umpiring and conduct of first class matches will be improved -a key to nurturing cricketing talents and improving the quality of the country's cricket. Let the BCB pay due attention to these much neglected issues cricketers have identified from their own bitter experience.

With Shakib's punitive measure coming on the heel of the unsavoury episode-turned an amicable settlement as also on the eve of the team's departure for India tour, psychological damage to the team's morale cannot be ruled out. When the captain and the best player is barred hours before such a tour and the team combination has to be refashioned, it is not easy to overcome the shock. What happened to the Australian team without Steven Smith and David Warner after their ban is a lesson not to be forgotten.

Shakib is more to Bangladesh team than what Smith or Warner is to Australia. The two Aussies are batsmen but Shakib performs with both bat and ball and can change the course of a match by either of those. He will be sorely missed by his teammates in India. In England Shakib carried the day for the team not once but time and again. His second highest score in the championship bears testimony to this.

His fall from the grace has little solace, though. He has admitted his mistake. No, he has not accepted the offer from an Indian bookie. But at the same time his failure to report to the International Cricket Council's anti-corruption unit (ACU) on three occasions is a grave omission liable for action. Shakib have been naive, for a cricketer of his stature should know the consequences of not bringing such clandestine corrupt approaches to the ACU's notice. At the same time, there is a feeling that the team management should always provide players with sound legal counselling including the psychological in order to keep them above reproach.

The bookmaker approached Shakib first in 2017 and then in 2018. Even if one does not feel prompted to make 2+2=4, there remains a lingering shadow. Shakib is 32 now, Smith 30 and Warner 33. Smith had a phenomenal comeback in the Ashes in England but Warner flopped. Can Shakib follow Smith or lose his form not to get it back? The nation will pray for the comeback of a stronger Shakib after October 28 next year when the ban goes.

Money and politics play a crucial role in games and sports. It is because of his ethics violation a possible successor of Sepp Blatter, Michel Platini could not make it to the top position of the FIFA. The Board for Control of Cricket in India (BCCI), the richest cricket body in the world was riven by several scams. So there is a need for handling cricketing affairs with care.

Rise of extremism in the West

Save rivers to save the country

Surge in inward remittance --- not a sure cure