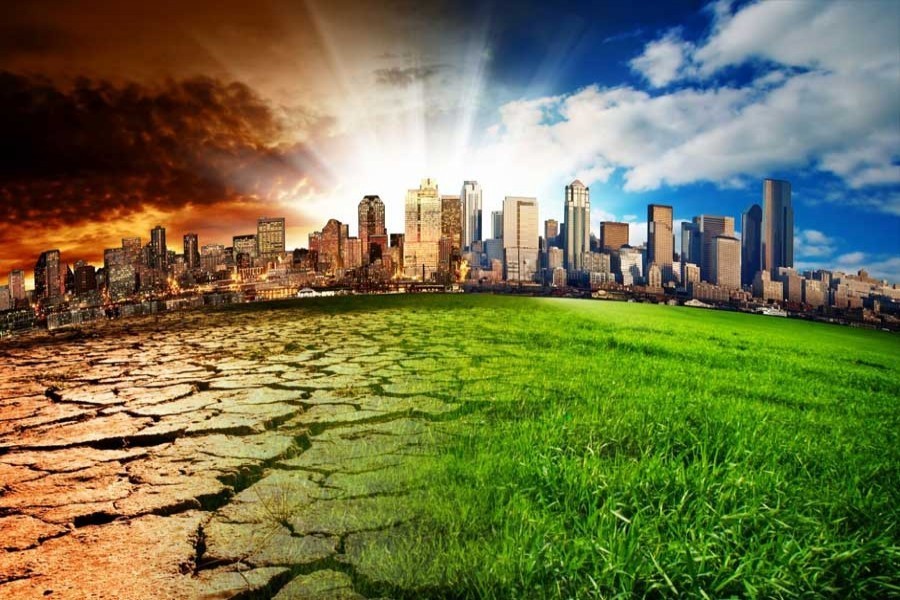 Prime Minister Sheikh Hasina's presence at the COP25 in Madrid last week finally proved to be quite vital and timely. This year she, like in the previous years, has laid renewed emphasis on the impact of climate change --- by focusing on the issue of climate migrants. She has made quite a bleak observation while speaking at a roundtable meeting of the conference. Upon drawing a post-climate change picture of the country, the premier homed in on a normally less discussed issue: people displaced by sea-level rise, also called climate migrants. She termed the brewing climate change disaster an existential threat to Bangladesh and a great number of vulnerable countries. And quite rightfully she wanted to know about the fate of these displaced people. Her worries stemmed from the fact that Bangladesh alone cannot cope with the massive crisis. That she would place an appeal to the industrialised nations to stand by the country in accommodating the climate refugees was quite expected. The issue of permanent shelters for the migrants is directly linked to livelihoods and the other prerequisites for survival. The Prime Minister has called for sincere cooperation of the global community in this regard.

Meanwhile, climate change watchers have warned that even a small rise in the sea level will leave devastating impacts on the country's coastal region. As they predict, as a consequence of the sea-level rise Bangladesh may lose 17.5 per cent of its land mass by 2050. It will lead to displacement of around 20-30 million people.

Bangladesh has been considered for decades one of the lands most vulnerable to climate change-induced sea-level rise. Of late, the German Watch Global Climate Index Report has put Bangladesh among the 10 most vulnerable nations feared to be affected by climate change. It's a dreadful picture. Given the dour message lurking in the report, days may not be far when Bangladesh would be bracketed with the vulnerable countries in Africa, Latin America and small island territories.

Perhaps it was the UN Secretary General Antonio Guterres who could unsparingly delve into the approaching climate apocalypse at the plenary of the COP25 (the 25th annual Conference of the Parties). The UN climate change conference is being held from 2-13 December, 2019. Without mincing words, the UN chief told the opening plenary that the mankind was confronted with a climate crisis threatening civilisation itself. Elaborating, Guterres said, "(At present) One is the path of surrender, where we have sleepwalked past the point of no return, jeopardising the health and safety of everyone on this planet." The UN chief was quite blunt and incisive in his observations. He posed a most critical question to the nations, "Do we really want to be remembered as the generation that buried its head in the sand, that fiddled while the planet burned?"

The writing on the wall is far from being reassuring. The maximum global temperature has unanimously been set at 1.5 degrees Celsius, lowering from 2 degrees Celsius threshold, above the pre-Industrial average between 1850 and1900. The World Meteorological Organisation (WMO) says the global temperatures so far this year were 1.1 degrees Celsius. It has put 2019 on course to be in the top three warmest years ever recorded, and possibly the hottest non-El Nino year yet. The WMO's portrayal of the global warming scenario for the outgoing year is quite appalling. As it has noted, man-made emissions from burning fossil fuels, building infrastructures, (methods of) growing crops and transporting goods mean 2019 is set to break the record for atmospheric carbon concentrations, locking in further warming. The WMO disclosed this in its report released at COP25.

The world weather watchdog in its study said oceans, which absorb 90 per cent of the excess heat produced by greenhouse gases, were now at their highest recorded temperatures. A distressing aspect of the report is seas are now a quarter more acidic than 150 years ago. It poses threat to vital marine ecosystems upon which billions of people rely for food and jobs. The WMO says in October the global mean sea level reached its highest on record, fuelled by the 329 billion tonnes of ice breaking away from the Greenland ice sheet in 12 months. The most disturbing data coming from the WMO is more than 10 million people were internally displaced in the first half of 2019 --- seven million directly due to extreme weather events such as storms, flooding and drought. By the end of the year, fresh displacements due to weather extremities could reach 22 million, the agency warned.

The global warming-vulnerable countries nowadays use the phrase 'polluters pay' targeting the large industrialised countries, especially the US and some other greenhouse gas-emitting nations. There are strong reasons for it. Most of the least developed countries (LDCs) with weak economies contribute little to the fast-rising global warming. Ironically, it is them who will, finally, have to bear the brunt of the global climate change catastrophe in the making. Many countries have already been made to begin feeling the heat. Bangladesh can boast of its multi-pronged initiatives taken to preempt the onslaught of the climate change. Apart from the all-out attempts to avail its share of the climate impact funds, the country has put in place strategies like making a national adaptation plan.

Besides, it has adopted impact mitigation measures to reduce greenhouse gas emission drastically. The greatest challenge, however, remains in the form of rehabilitating the internally displaced people. The task calls for massive infrastructure building and fund mobilisation. Bangladesh cannot be expected to achieve full success in coping with the climate impact challenge with its limited resources. For this, it has to rely on cooperation of international organisations like the UN, and large donor countries.