Charlatanism at its worst in the name of art 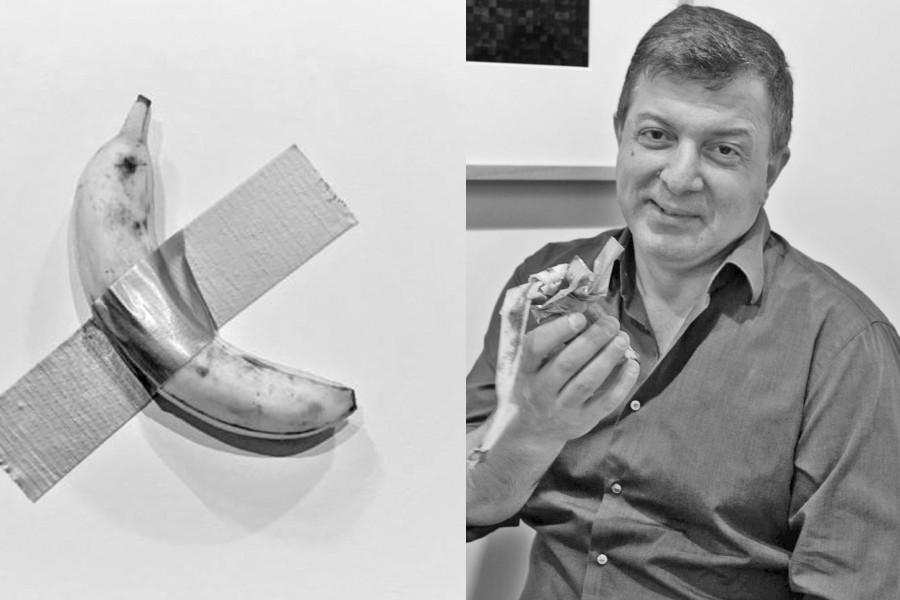 An artwork is so because the sense of aesthetics that goes into its making transcends beyond the creation to take its viewers into its sway. Well, the spell may not work on the uninitiated but art connoisseurs find the message, if there is any, or the beauty or charm inherent in its appeal. When it is abstract, modernism or post-modernism art, it may not be comprehensible to most people but if it is figurative, expressionism or impressionism, there is a chance even the common viewers will appreciate the art -albeit the understanding may differ from the artist's intending meaning. If it is surrealism, most viewers will have general view of the painting but they are most likely to miss what lies well beyond the reality.

However, Italian artist Maurizio Cattelan loves to experiment with the most commonplace to pass them as a work of art which verge on the freakish. One such freak art was a real banana fastened to the wall with a duct tape at the Art Basel show in Miami Beach. Titled "Comedian" by the artist, it was surprisingly sold for an astounding sum of $120,000. Its buyer was a French collector.

Even many would question if a banana when duct-taped to a wall can be an artwork let alone qualify to be a comedian. What relations does a banana have with a comedian? Even if this is not freakish enough, there are people like the French collector who may find in the taped banana artistic elements so much so that they are ready to dispense with a hefty sum of $120,000. Sometimes crazy guys are on the wings of their limitless craziness.

True, art work's value cannot be measured in terms of money. No amount of money is worth the creation done by the forms and colours of heart. But this is no work of Van Gog, Paul Gauguin, Henry Matisse, Monet or Picasso. Just a banana like any other that finds its place on the breakfast table. It cannot be an artwork, no matter how cleverly you hang it from the wall. Absurdity has its limit.

What happens to the particular 'valuable' work of art next shows freakishness at its outrageous best. On Saturday last a man, also a Georgian-born self-proclaimed artist named David Datuna walks to the wall, pulls off the banana and starts eating the banana. Quite an anti-climax to the artistic display! Maybe, melodrama too. But to ordinary mortals like us, Datuna has done exactly what the banana is worth for. "Art performance … hungry artist", he mumbles.

The contrast has been drawn in sharpest of lines here. Datuna, it seems, is not a high profile artist and may even struggle to eke out a living from his vocation. To him the banana was nothing more than food. In this connection, poet Sukanta's metaphorical or allegorical use of the moon as scalded loaf can be an apt example. The hungry artist has blatantly exposed the charlatanism of people who somehow can afford to make a mockery of people's suffering wittingly or unwittingly, courtesy of their own immeasurable affluence.

In the real world, millions of people struggle to survive let alone live a decent life. When such people's travails do not touch hearts of people who rather revel in ludicrous and outrageous exercises and even try to pass those as unique artistic and creative works, the eccentricity proves too much for any sensitive person.

No wonder Cattelan is better known for his 18-carat toilet valued at $ 5.0-6.0 million. Named 'America', the commode was once offered by the Italian artist to President Donald Trump. One wonders how the Americans can tolerate the disparagement he causes by naming his commode after their country, the only superpower of today's world! It seems there are freaks like Cattelan who put it on display at Blenheim Palace, the birth place of Britain's World War II hero Churchill. As a twist of an anti-climax, the toilet was stolen from the palace during the exhibition. A fitting response from a thief or thieves!