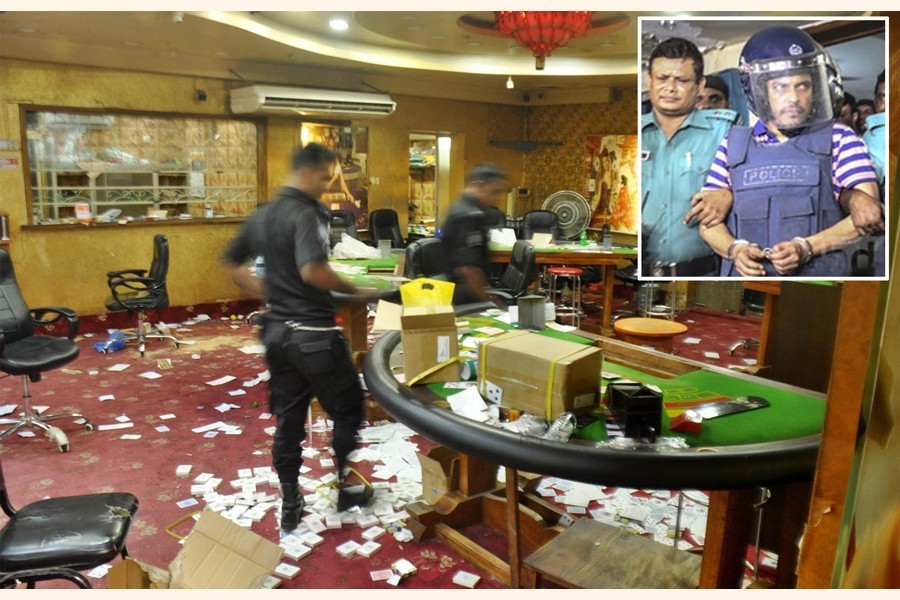 Dichotomy between government policies and actions is nothing unusual. In fact, this factor, on occasions, does create problems in day-to-day operations of government agencies.

The latest case in point is the unearthing of casinos in a number of sports clubs and private club houses and the involvement of some ruling party men in their operations.

Casinos where gambling is arranged, are not legal in Bangladesh. So, raids by the Rapid Action Battalion (RAB) and the police on those gambling places are justified notwithstanding the fact the actions have given rise to lots of troubling questions, political or otherwise.

It does not matter how the ruling party and its opposition are trying to cash in on the 'casino' issue, but the common people are really shocked to see the stacks of cash money and huge quantity of gold ornaments that are being recovered by the RAB from the office and houses of a few mid-level players of the country's illegal gambling empire. They are only guessing about the extent of ill-gotten wealth amassed by the top dogs in the trade.

Gambling is illegal because Article 18(2) of the Constitution dictates that the State shall adopt effective measures to prevent prostitution and gambling. The Public Gambling Act of 1867 also provides for meting out  punishment albeit very light to the owners of places of gambling and people taking part in it.

What is however very strange is that the country's import policy has not imposed any restriction on the procurement of the gambling materials used in casinos such as card shufflers, poker tables, roulette wheels etc. The policy in question contains a long list of items the import of which is not allowed for one reason or another.

Since the equipment and items used in casinos and in other places of gambling are not on the list of restricted items, some people/organisations have imported the same paying duty and taxes, nearly 175 per cent, in recent years.

Interestingly, the customs intelligence, following the unearthing of the casinos in Dhaka, are reportedly trying to locate the entities that have imported gambling equipment. Why is that?

The importers did not violate any law since the import policy does not put any restriction on the procurement of gambling equipment. If the search is for finding possible tax evasion, then it is all right.

It is the job of the law enforcers to locate the places and persons who are using the equipment, imported or otherwise, for gambling purposes in an organised manner and punish the offenders concerned in accordance with the law.

The policymakers should look into the lapses on the part of the  Ministry of Commerce and the National Board of Revenue (NBR).

How could these two organisations allow the import of gambling materials when the Constitution asks for taking effective measures to 'prevent gambling'? Should not be both or relevant others aware of the Constitutional bar?

Moreover, the Public Gambling Act needs to be updated and made time-befitting. Fines ranging between Tk 100 and Tk 200 and imprisonment tenure between one month and three months, as provided under the act, are too light to discourage people from indulging in gambling. Those who have been arrested in connection with the ongoing casino episode would be  extremely happy if the law enforcers accuse them under the gambling act. However, that is unlikely to happen. They will be charged under some other laws, stringent ones, it seems.