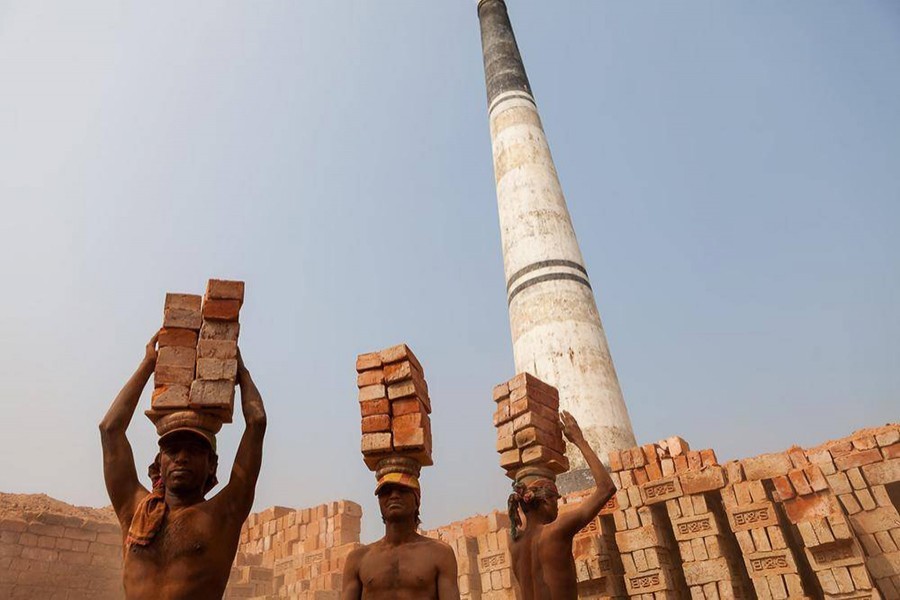 The hilly areas in the Chittagong Hill Tracts (CHT) covered by lush green forests have lately come under the swoop of the owners of illegal brick kilns. Many large swathes adjacent to human settlements have already been cleared of forests and hills. In their place one can now find scattered brick kilns, their atrociously tall chimneys spewing out black smoke day in and day out. The reckless brick kiln owners have already done great harm to the environmental soundness of the area. They use the earth of the hills as ingredients of bricks, thus flattening scores of hills and hillocks. The trees covering them are being felled indiscriminately to use them as fuel for the brick-baking furnaces. Logs collected from the hitherto unaffected trees continue to end up being burnt in the kilns. The tale doesn't end here. Plumes of smoke emitting from the logs burnt in the furnaces continue to vitiate the whole atmosphere in the nearby areas.

The brick kiln owners have long been going ahead with their environment-hostile practice evidently in cahoots with the unscrupulous elements in the local administrations. A section of influential people have apparently thrown their weight behind the kiln operators.

Of the three CHT districts, it is Bandarban which appears to be the most vulnerable to the onslaught of the brick kiln owners. Many people also include Kharachhari in the list. Coming to Bandarban, the dreadful development that has surfaced in the recent years is the penetration of these reckless elements into the remote areas of the hill district. Few locals could ever imagine that one day they, too, would fall victim to this menace chiefly confined to flatland. Over the last few years, many hills have been deforested mindlessly. It has resulted in a sharp decline in tourists' arrival in the affected areas. Due to the landscape of the country being flat, tranquil green hills and their valleys have always attracted solitude-seeking people. Badarban is the most gifted area in the country in terms of density of hills. Loss of this natural gift will deprive Bangladesh of a valuable resource.   People in the brick kiln-infested areas deep inside the CHT are mostly poverty-stricken and thus powerless. Seeing their hills and forests vanish continuously, these people find no option except remaining shocked and bewildered. Of these people, the fast dwindling indigenous communities emerge as the most affected. They have no option except ruing their benighted fate. With the centuries-old hills gone they are compelled to identify themselves as mere helpless onlookers --- with no clout or strength required to resist the brick kiln owners.

As mentioned earlier, the kiln operators enjoy the blessings of the areas' influential people. Most of these anti-environment offences continue to be committed to the full knowledge of the departments responsible for preserving the hills and forests. The local officials are said to look the other way, leaving the peaceful locals to continue becoming silent victims of the orgiastic destruction of the pristine woodlands.

Among many others, the brick kilns' operations leave irremediably adverse impact on the local inhabitants' croplands, orchards and different types of vegetations. The small and larger wildlife species are made to be hit severely. Ecologists blame the anti-nature human activities in the forests for the loss of biodiversity in large areas. On top of all this, the communities living inside the forests for ages become exposed to the noxious fumes of the kilns. To their misfortune, they have no compassionate authorities around to turn to. It's the government departments dealing with environment and biodiversity which can come to their rescue. It's urgent because the reckless activities of the mushrooming brick kilns continue to jeopardise the environmental balance in the CHT. The trees and hills in the region have for centuries been protecting its inhabitants from lots of scourges related to environmental degradation, resultant health hazards and crop losses. But the flipside is the authorities in the other parts of the country have yet to fully enforce the lately formulated stringent laws targeting errant brick kilns. Their tendency to defy the rules concerning brick kilns in the areas around croplands in the country's villages is a common phenomenon. The temerity has reached such an extent that these days they have started setting up brick kilns in the areas bordering the big busy cities. That Dhaka is the country's capital and the seat of the government is of little concern to them. In the past, brick kiln owners would be seen opening their business on the relatively distant Dhaka outskirts. In the recent times, these kilns can be spotted at places on the very boundaries of the capital. Given this dreadful scenario the state of the plain land rural areas could be understood, not to speak of the remote regions.

Along with the hill and forest dominated regions, brick kilns are currently seen encroaching on many Ecologically Critical Areas. The Hakaluki Haor in Moulvibazar district is one of them. Brick kilns set up around the large water body, also a popular tourist site, continue to degrade the area's environment. Apart from croplands and forests, the kilns continue to pollute the nearby villages that include a considerable number of schools. The kiln-emitted smoke also leaves adverse impact on the Haor's fish and other aquatic organisms. Campaigns launched by local environmental activists demanding closure of the brick kilns have eventually proved futile. The most alarming aspect of the operation of brick kilns in the CHT and the other ecologically critical areas is the localised environmental catastrophes. In a small country like Bangladesh, it may not take much time for the fury of the disasters to devour newer regions.