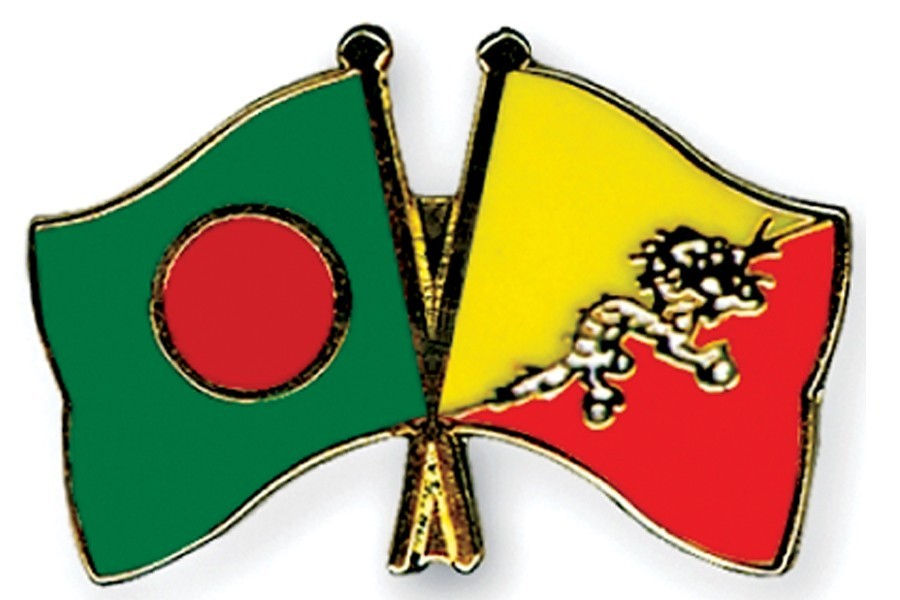 Nestled in the eastern Himalayas, the Kingdom of Bhutan is a land-locked country of South Asia. It is bordered by Tibet Autonomous Region of China in the north, the Sikkim state of India and Chumbi valley of Tibet in the west, Arunachal Pradesh of India in the east, and the Indian states of Assam and West Bengal in the south. With a population of around 800 thousand, it is a predominantly Buddhist (74%) country as well as the second least populous nation of South Asia after the Maldives.

Having an area of 38,394 square kilometres, mostly mountainous terrain, Bhutan was never colonised in the past. The country transitioned from an absolute monarchy to a constitutional monarchy in 2008. Its per capita GDP (nominal) of US$ 3,117 is one of the highest in South Asia. It shares the same time zone with Bangladesh and the internet domain (.bt) is similar to Bangladesh's (.bd). The country has a forest coverage of 70.5 per cent area, one of the highest in the world. It attaches topmost priority to environmental conservation as part of its efforts to promote gross national happiness. The life expectancy of the Bhutanese people is 70 years, while the literacy rate is 65 per cent.

Bhutan enjoys a special position in the minds of our people, as it was the first country to recognize Bangladesh in 1971 as an independent and sovereign nation. But sadly, trade and economic relations between the two countries have not picked up and reached a desired or satisfactory level till now. The recent visit by the new Bhutanese prime minister, in office since November last year, reminded all concerned the need for bolstering trade and economic ties for the mutual benefit of both countries.

Prime Minister Lotay Tshering has a special liking for Bangladesh, as he is an alumnus of Mymensingh Medical College, and received professional training on surgery from Sir Salimullah Medical College of Dhaka. Even today, he wears his surgery gloves for treating patients in Bhutanese hospitals every Sunday, despite his hectic schedule as the chief executive. He sounded optimistic when he told our business leaders at a dialogue during his visit in the second week of April: "We are landlocked, but let me tell you my friends: we are not mind-blocked. We are open to business. If Bangladeshis feel Bhutanese are very close to their heart, I think you must take a step ahead"... "We are going to graduate to a middle-income country almost at the same time. As we graduate, we cannot depend on aid. We must learn how to do business".

Bangladesh and Bhutan agreed to grant duty and quota-free entry to some commodities during the visit of the Bhutanese prime minister. An agreement on transportation of commodities was signed in his presence, which would boost trade between the two countries by utilising inland waterways for transporting transit cargoes via India. Besides, MOUs were also signed on enhancing cooperation in the areas of health, agriculture, tourism and training of public administration officials.

Incidentally, Bangladesh is the second largest trading partner of Bhutan after India in the region, as Bhutanese trade is heavily concentrated in South Asia. In 2016, around 85 per cent of Bhutan's total exports went to India, mainly comprising hydro-power, base metals, wood products, plastics, minerals, articles of stone, plaster, cement, asbestos, mica or similar materials, food products, vegetables, textiles and alcohol. Over 82 per cent of her imports were from India that included petroleum products, live animals, livestock products, prepared foodstuffs, vegetables, automobiles and spares, machinery and fabrics.

Bhutan has a preferential trading arrangement (PTA) with Bangladesh. Both the countries signed an agreement on trade in 2014 as well as a protocol to facilitate it.  Available statistics show that trade between Bangladesh and Bhutan rose to US$ 53 million in 2016-17 from US$ 26.34 million in 2015-16. But the trade ratio was heavily tilted towards Bhutan at 1:4.55. Major export items from Bangladesh are agricultural commodities, woven garments, knitwear and footwear. Major import items from Bhutan are vegetable products, minerals, prepared foodstuffs, chemical or allied products, textiles and related articles, base metals-cum-articles, machinery-cum-mechanical appliances, and electrical equipment. In order to bolster trade ties between the two countries, there is an urgent need to pursue further liberalisation initiatives through deeper reductions in tariff, elimination of non-tariff barriers, expanded list of duty and quota-free goods, and widening of product coverage under the existing PTA.

The strengths of the Bhutanese economy are renewable natural resources (RNR), energy, mines and minerals, as well as tourism. Export of primary products from the RNR sector contributes significantly to enhancing rural households' food security, consumption and income. Since the opening up of the tourism sector in 1974, Bhutan has witnessed its swift expansion. Tourism has now become a major service sector that generates employment and earns valuable foreign exchange. Compared with only 274 visitors in 1974, the number of foreign tourists rose to over 209,000 in 2016. Apart from being among the largest earners of foreign exchange and revenue, tourism has also contributed to the growth of small and micro enterprises and reinforced Bhutan's image and identity in the outside world. However, Bhutan has adhered to the principle of 'high value, low impact' tourism in order to avoid the possible adverse impacts of mass tourism on the country's environment, culture and heritage.

Bhutan is also endowed with rich mineral resources, which have facilitated sustainable growth of mineral-based industries. Extraction of mineral resources has helped generate employment and contributed to poverty alleviation. The manufacturing sector is mainly dependent on agro-, forestry and mineral-based industries. The sector is in a blossoming stage with mostly small-sized enterprises. It has huge hydropower potential, which is becoming the backbone of its economy. Bhutan is a natural haven for hydropower production, with an estimated 30,000 megawatt power generation potential. It has now become a significant exporter of electricity to India, and this is one area where joint collaboration between Bangladesh and Bhutan can prove to be beneficial for both.