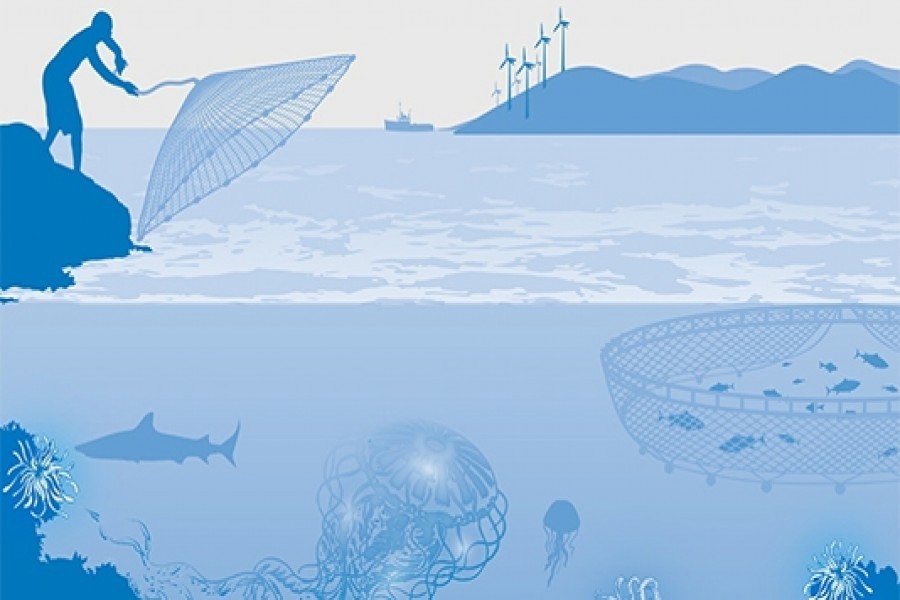 The third ministerial conference of the Indian Ocean Rim Association (IORA) that concluded in the city last week called for sustainable use of the blue economy resources ensuring balanced approach between conservation and development.

The Dhaka Declaration, adopted at the end of the two-day meeting, said ideas, principles and norms of blue economy contribute significantly towards the eradication of poverty. These also reinforce food and nutrition security, mitigation and adaptation of climate change and generation of sustainable and inclusive livelihoods.

The IORA member states have stressed the need for considering the potential risks while exploiting marine resources, particularly in the high seas and ocean-beds. In the wake of growing marine pollution and ocean acidification, member states have agreed to address the resultant impact by supporting the advancement of ocean science in these areas, the declaration said.

Bangladesh, a member of 20 IORA states, played an active role in the conference. Addressing the meeting, the country's foreign minister Dr AK Abdul Momen said in order to promote sustainable and responsible fisheries management and development, the association should adopt joint capacity building projects and information sharing on aquaculture to address food security and fishing in the Indian Ocean region.

IORA should assume the lead role to combat the scourge of maritime piracy, armed robbery, human trafficking by sea, illegal arms trafficking. It is only possible through a common understanding of maritime governance and its pragmatic application with effective efforts.

The conference provided members with the opportunity to forge greater cooperation in areas of marine fisheries, shipping, sea-bed exploration and renewable energy towards achieving a sustainable Blue Economy in the region. The member states should formulate and implement projects for economic cooperation relating to trade facilitation and liberalisation, promotion of foreign investment, scientific and technological exchanges, and marine tourism.

All nations need to move quickly to save the marine ecological system as the protection of ocean and sea resources is vital to get long-term benefits from the Indian Ocean belt. As stated by Prime Minister Sheikh Hasina while inaugurating it, all states need to realise that every investment we make and every step we take to protect our oceans and marine resources is well worth in the long-term regional benefits.

The oceans and seas absorb almost 30 per cent of all greenhouse gases as well as 90 per cent of the excess heat caused by global warming. The existence of human race will be in peril if the marine ecological system disrupts. Everybody needs to respond very quickly to tackle these challenges.

There is no denying that a properly coordinated, profitable and overall  protective policy has to be adopted and act accordingly to achieve the goal. It should be kept in mind that the marine environment cannot be sacrificed while pursuing economic growth.  It may be mentioned that Bangladesh has completely banned fishing by destructive methods and means for the conservation of the marine lives. A short, medium and long-term plan of actions has been formulated with a view to conserving, controlled-harnessing, managing and development of fishes in the Bay of Bengal.

However, it is a bitter truth that oceans are now under ominous threat owing to the human-induced causes which are, for example, over-extraction or exploitation of resources, environmental pollution, oil spill, littering of plastic wastes, underwater noise pollution and above all the climate change. All these activities are resulting in further heating of sea water and thereby impose threats to the marine bio-diversity. For such reasons, most of the IORA member states are highly vulnerable to Tsunami and cyclones.

In pursuit of making the best outcome of a unified sustainable blue economy, there is no alternative to cooperation and coordination among the stakeholders. As a matter of fact, all should join in an agreement to achieve Goal-14 of the sustainable development goals (SDGs) through a sustainable approach of management of the sea resources.

The concept of the blue economy was, in fact, conceived at the Rio+20 United Nations Conference on Sustainable Development held in Rio de Janeiro in June 2012, viewing the idea as an alternative economic model for sustainable development that puts the oceans at the centre of this approach.

Bangladesh is, however, set to complete a strategic plan for exploring marine resources in the Bay of Bengal within the next two years. The World Bank is  providing funds for study on the offshore turfs under the technical assistance (TA) project for spotting the potential of the blue economy in the Bay of Bengal. The WB consultants are preparing a development project proposal (DPP) for the investment project based on the survey results where the clear path of exploring potential resources in the Bay and their contribution to the macro-economy would be detailed out.

The country's private entrepreneurs should come forward with greater investment for oil and gas exploration in deep sea area. The country's total maritime boundary is about 81 per cent of total land area which is really big. There is a need for skilled workforce to tap the potentials of blue economy.

There are great opportunities to accelerate the sustainable development process of the respective countries of the region through blue economy approach making best use of the unused or untapped resources of the sea. Formulation and effective implementation of blue economy is a demand of the time for economic well-being of the region, which can be achieved by efficient use of sea resources.