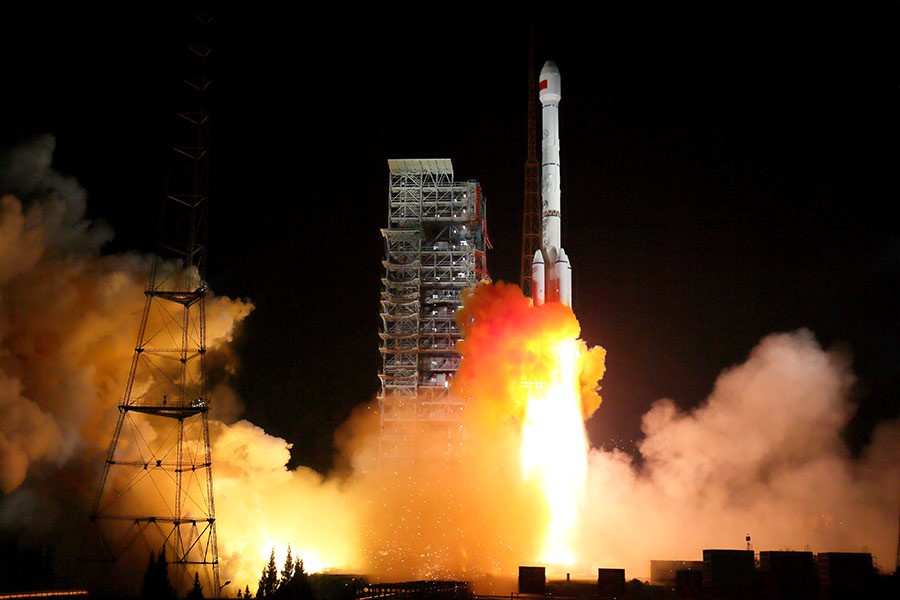 Nearly every article on 'space security' begins with the acknowledgement that satellites and space-based services are critical for modern societies. And with good reason.

Whether it be the US, Russia, China, or any other major military force, all employ space capabilities to some extent.

As a result of this dependence, some militaries are developing the tools to deny their adversaries the use and benefit of space systems. These capabilities come in several different categories, but they all share one common feature: they are threats to space systems. This is not unexpected.

Much the same as aircraft and anti-aircraft weapons, it was only a matter of time before military actors began developing the means to neutralise advantages gained from space.

Yet while this technology has previously been limited to a few players, new innovations in asymmetric warfare are quickly changing the dynamics of what might be conflict in space. Moreover, there is a very small possibility (and it is highly remote) that some capabilities be put in space that can target objects in the atmosphere or on the surface of the Earth. These weapons systems would represent a threat from space systems.

As unlikely as this possibility might be, it is sufficiently real for some states who see counterspace weapons as possible insurance against attempts at 'dominance' in outer space.

The Secure World Foundation (SWF) - a think-tank based in Washington, DC - maintains a global counterspace capabilities assessment. This open-source document uses publicly available information to show which countries are developing what capabilities.

The principal actors pursuing such capabilities are the US, Russia, China and India. While the assessment includes a few other outliers that might have the building blocks for counterspace capabilities (i.e. Israel, Iran, Pakistan, North Korea), recent events indicate that there are more countries now actively seeking 'weapons in space', including France and Japan.

There are four main types of counterspace capabilities. The first is 'kinetic', namely those that use physical force to cause damage to a satellite. This includes anti-satellite missiles (like the one recently used by India) or even co-orbital drones. These drones are highly manoeuvrable craft that can repair, refuel or even remove satellites from orbit. Such tools can be used for beneficial purposes, like debris removal, or possibly to attack satellites.

The second type of counterspace capability is 'non-kinetic', which use high-powered energy to cause disruption or damage to satellites. At present, several countries are developing lasers that could be used in this way, including the US, Russia, China and France.

In the 1980s, then-US President Ronald Reagan launched an initiative called Star Wars, which consisted of satellites with missile interceptors that could destroy intercontinental ballistic missiles (ICBMs) in orbit.

The main problem with kinetic and non-kinetic weapons is that when they damage or destroy a satellite, they also create debris, which does not necessarily come back down to Earth right away. As one expert once told me, it is like having a war in which the bullets never stop flying.

The other two categories of capabilities are less destructive but are much more prevalent. Electronic counterspace capabilities, which includes jamming and spoofing, is easily accessible to many actors, including non-state actors. The same can be said for cyber capabilities, which can be deployed for espionage, surveillance, or even destruction of space systems.

One of the major concerns with these two categories of capabilities is that there is no consensus around when 'interference' becomes an attack. This is particularly worrying as the North Atlantic Treaty Organisation (NATO) just announced plans to declare that an 'attack' on a satellite is enough to trigger collective self-defence. There is no indication whether there is consensus among NATO members as to what is considered an attack on a space object, nor whether that same view is shared with any other countries.

THREATS 'FROM' SPACE SYSTEMS: While the counterspace capabilities listed above describe current threats 'to' space systems, there is another challenge that features often in space security talks, namely threats 'from' space systems.

These are different because rather than targeting space objects, these capabilities would be able to target objects in the atmosphere or on the ground. At present, no country has ever even hinted at plans to deploy such weapons, except the US.

In the 1980s, then-US President Ronald Reagan launched an initiative called Star Wars, which consisted of satellites with missile interceptors that could destroy ICBMs in orbit. This idea has long been refuted as being about as technically or economically feasible as deploying 'pink dragons' in space.

Nevertheless, space-based missile interceptors are being discussed by the US once again, albeit at a very superficial level. The concern here is that space-based missile defence is a pretext to deploy missiles that can strike surface targets. And while many experts cite the extreme remoteness of the possibility of such a weapons system ever being deployed, the mere perception of a threat is creating real challenges in multilateral discussions.

MULTILATERAL EFFORTS TO MITIGATE THREATS: UN member states acknowledged the growing challenges to space security decades ago, yet there is little progress on this issue. States are generally divided into two camps. Some (mostly Western, developed states) are concerned about threats 'to' their space systems, and want voluntary measures to provide transparency in space. This includes measures like launch notifications, sharing orbital data and publishing national space policies.

Others (led by Russia and China but also including most of the rest of the world), are not opposed to voluntary measures but would prefer to see a treaty, which is legally binding. These states are also concerned by the possibility (albeit still a remote one) that someone might one day put weapons in space that can threaten people on the ground. For these states, only a legally binding instrument will suffice.

For the moment, there does not seem to be much room for consensus. The two camps in space security discussions continue to hold firm on their positions. One option for moving forward might be to focus on specific issues that affect all, such as the testing of destructive anti-satellite technology that creates debris.

However, more ambitious solutions will likely continue to be out of reach, particularly if space-based missile defence continues to feature in the background of multilateral discussions without being directly addressed.

Daniel A. Porras is a fellow for space security at the United Nations Institute for Disarmament Research (UNIDIR).