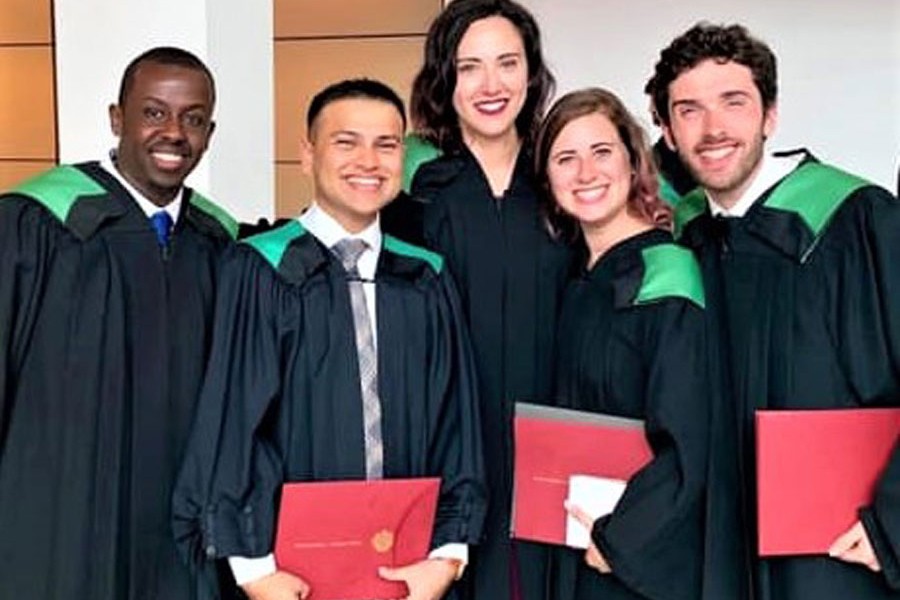 When he was seven years old, he had Ewing's Sarcoma on his left femur which he could luckily overcome in Canada after a rigorous treatment at Sick Kids Hospital Toronto. He is now a doctor.

Raphaël Nahar Rivière graduated from the University of Ottawa's medical school on May 17. He was inspired to study medicine after surviving childhood cancer. Raphael Riviere was diagnosed in 2001, with Ewing's Sarcoma on his left femur at the age of seven, just three months after I arrived in Canada from Bangladesh. After two weeks, my husband left Canada to tackle his business in Bangladesh. My son had frequent fevers and pains on his left knee, and he went through doctors, clinics for the blood test and X-rays, and various types of medicine to heal him. Nothing helped relieve his pain. Initially, nobody could figure out what was wrong with him neither in Bangladesh nor in Canada. 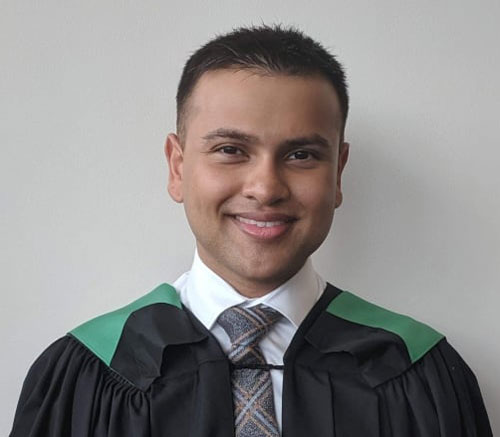 My friends and family consoled me then, saying it was nothing and it would go away by itself. I relied on that with hope to get over it. However, my sixth sense suggested other things, an underlying force of fears, and an intricate story.

It was my fate that guided me to Canada. In 2000 while I completed M. Phil in Anthropology and received a few offers to join public universities, my supervisor suggested having a higher degree abroad. Leaving those job offers, I came to Canada because I wanted to complete my higher studies. However, I didn't really jump for a new idea to stay in Canada. I had a plan to go back after a few years of my study.

Story dynamics turned to a different path for the destined moment, I remember at recess in school my son in Grade 2 didn't want to go out and run around with his peers as he was in pain; however, the school staff urged him to go in the school field and told my son that he can't stay inside and pretend about having any pain, Raphael said.

He was unable to walk to school the next day. Soon enough, I took him to a clinic to see a local doctor due to his complaints. He did a regular blood test, and an x-ray of his knee -- just like the doctors did it, back in my home country, and diagnosed nothing. He remarked that he (my son) was a desperate youth, seeking attention from a mother. I reacted sharply, "how can you say that? How can he be making up high fevers to get attention from me?"

After my request, the doctor referred him to a rheumatologist at Sick Kids, and after his first appointment, the rheumatologist diagnosed my son having bone cancer. Two Oncologists came down from the 8th floor to confirm that it is bone cancer.  Dr. Grant is an Oncologist; he told me, "mom, go home and do not worry; we will take care of him." I was standing alone outside the Sick children hospital and felt terrified. Out of fear and unknown, I was shaking, listening to this deadly news. I hold my young daughter and son's hands tightly and returned home. A biopsy was done on him soon after, and I was confirmed that he had Ewing's Sarcoma. An operation was done to insert a metal port in his chest to link the heavy dosages of chemotherapy that he would receive soon after. The IV machine, a series of x-rays, CT Scans, and MRIs, became a daily routine throughout his life. It all happened so fast in a sequence.

Luckily, the tumor shrunk over a period of six agonizing months of chemo. Then Raphael had his 18-hour-long operation where eight inches of his left femur was cut and replaced with a dead bone to ensure blood circulation, starting above the knee-joint and ending at half of the ball joint on one's hip. To support the dead bone, the fibula of his right leg was taken and allographed with the dead one in hopes that it would eventually grow and would be strengthened enough to replace the dead bone in some way or other. A metal plate was lined up along the dead bone with many screws to keep the new construction, all in one-piece.

The members of the family, friends, teachers, doctors, and social workers - it is truly surprising how large a group one needs to rely on, to help oneself to pull out of a devastating situation. He was lucky, lucky enough to survive in this situation; and I was lucky enough to dream again about his study and future just as every other mom should have. He continued study staying on the hospital bed, home and school. He was identified twice that he is ahead and should join in the gifted programme. But I was reluctant not to put pressure on him. In high school he got acceptance International Baccalaureate (IB) programme and also in Talented Offerings for Science Programme (TOPS). He chose the later.

He had a dream! And he has created Youth Sarcoma Initiative (YSI) in hopes to achieve that sole dream. He founded the organization when he was in Grade 10. To help raise funds for the Hospital for Sick Children, he organized a three-kilometre charity walk, and he organized an Art for Hope event. His message is: "I believe beyond belief".

The 17-year-old stood out from the pack because of his efforts raising awareness and money for a cause close to his heart. A sarcoma survivor, he started the Youth Sarcoma Initiative to raise awareness about cancer. In the days leading up to the announcement that he was one of the 20 students selected, the Marc Garneau Collegiate Institute student was having dreams that he'd won. Raphael received the life-changing phone call in late February while he was watching a movie. He was one of the winners out of 3,400 applicants that was amazing for the Grade 12 student. The scholarship is valued at up to $70,000 toward post-secondary studies, which he planned to use to study life sciences and human biology at the University of Toronto and join in the exchange programme in University College London and research in Lyon University. He worked in developing countries such as Bangladesh and Africa. Last year, in 2018, his medical team (Canadian physicians, residents, medical students, nurses, and pharmacists) took $10,000 worth of medications to Bénin, West Africa to support the poor.

My son's first day at Trinity College at the University of Toronto is vivid. After his bachelor's in Life Science, he applied in five Ivy League Schools such as Yale, Columbia, Harvard, Oxford, and Cambridge including Faculty of Medicine, Ottawa in the French version.  He was lucky as he got acceptance in all those different programmes in five Ivy League Schools but preferred to join in Medicine.

He always wanted to work as a doctor without borders and became a Francophone doctor to serve a diverse population of Canada including the part of the globe. And he became. On May 17 2019 he received the degree as a doctor. On July 1 as an Anesthesiology resident, he is going to join the University of Toronto.  Isn't it wonderful to see a child grown into a young man as a Doctor? There are many accomplishments that one may score in his or her lifetime. Some of them are specifically remembered and acknowledged due to the difficulty of meeting the challenge or achieving success. Being a Bangladeshi mother, I know that I am, along with other mothers, proud of being just that - a loving mother should be. I am happy and overwhelmed by his achievement. And it is his biggest triumph that he achieved to be a doctor and the hardest challenge that he encountered so far.

The writer is a Doctoral Candidate in Curriculum Studies and Teacher Development, Ontario Institute for Studies in Education (OISE) and Research assistant, University of Toronto.
pamelia07@hotmail.com