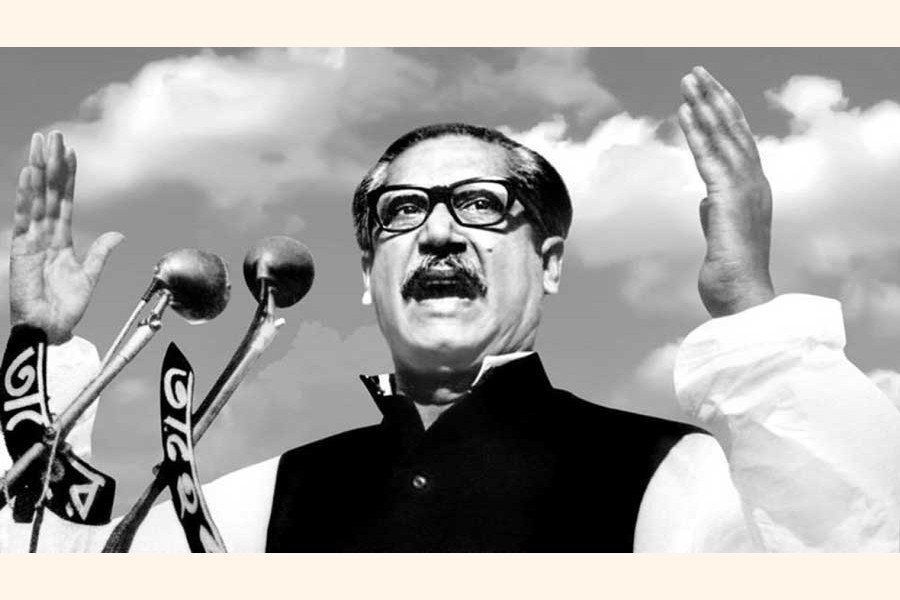 Bangabandhu Sheikh Mujibur Rahman is the Father of the Nation of Bangladesh, a successful political entrepreneur. Mujib was considered as a political entrepreneur as he   developed new thoughts, methods, creativities, gestures, yields and services to improve the lifestyle of the Bengalese.

The language movement was the commencement of opposing against the evil force where he played a key role for the mother tongue and gradually it transformed towards   independence of Bangladesh led by the greatest political entrepreneur Mujib. He acted against the odd, removing poverty and not in favour of totalitarianism and a feudal concept. He fought for the mother language and the people of his country. He was termed the greatest Bengali in a thousand years.

Mujib was a magnetic leader who planned to fight against dispute and uprising touching   the Bengalis of East Pakistan in their confrontation to the unfair events, oppression against Pakistani administration who treated us as a colony and sucked profit. He finally succeeded to build the self-governing independent state of Bangladesh.

The life of Mujib was sacrificed for the Bengalis and the tragedy is that a section of conspirators kill the great man and his family members. He always dreamt of a society free from exploitation by eliminating corruption, terrorism, discrimination of race, colour, gender, religion, drugs and militancy.

The term political entrepreneur can refer to Bangabandhu due to the following reasons: He was typically energetic in the pasture of   politics   who found a diversified political mission, group, or political revelry in the interest of Bengalese; He never sought any variety of other such flattering preparations with administrations    all the way through political manipulations.

If we carefully judge the life sketch and activities of Mujib, we found that he was always devoted for the people before birth of Bangladesh and after the birth of the country until his death to beat poverty and ensure economic progress and redistribution of wealth and social justice and remove income inequality. In the year 1968 the Pakistani government filed the notorious Agartala Conspiracy Case against Mujib and thirty-four Bengali civil and military officers. This false case created anger and hatred against the Pakistanis. The Awami League secured 167 seats out of 169 National Assembly seats in East Pakistan and won 288 out of 300 seats in the Provincial Assembly on 7 December 1970.

The significant speech on 7th March, 1971 was conveyed  to  the citizens of this region  to get ready for the independence war in 1971, if Pakistanis start any genocide against Bengalis. This also proved his farsightedness. Bangabandhu proved his political entrepreneurship in the speech by motivating people, taking risk and assessing the environmental scanning.

Even when he was not sure  whether Pakistanis may arrest him  at zero hours of 26th March, 1971 when west Pakistanis and his Bengali assistance Rajakars, Albadars, Al shams started genocide in this region. At that time Bangabandhu  sent independence message which is as follows : "This may be my last message. From today Bangla Desh is independent. I call upon the people of Bangla Desh, wherever you are and with whatever you have, to resist the army of occupation to the last. Your fight must go on until the last soldier of the Pakistan occupation army is expelled from the soil of Bangla Desh and final victory is achieved." …Sheikh Mujibur Rahman. How great and rare a leader he was!

After independence of Bangladesh when he arrived in Dhaka on 10 January, 1972, he declared that the country will remain sovereign and employment, food and removing poverty and reduction of dependence on bureaucrats will not remain.

Mujib was   one of the founding joint secretaries of the East Pakistan Awami Muslim League which was established in the year 1949, general secretary of the Awami League during the period of 1953 to 1966 and also president of the Awami League from 1966 to 1974. He joined the parliamentary politics first in the year 1954 by the election process as a member of the East Bengal Legislative Assembly.

Mujib served as the first President of Bangladesh from 1971 to 12 January 1972 and again from 25 January 1975 to 15 August 1975 until his killing   by the miscreants. However, during the independence war he was the president in absentia. He became the Prime Minister of Bangladesh from 12 January 1972 to 25 January 1975. He came up with the innovative thoughts, skills, strategies, images, and public procedures to make sure that the people of the then East Pakistan i.e. Bengalese will get better off the condition of this area. If we consider his psychology and behavioural aspects, we shall find that he was a founding member of the East Pakistan Muslim Students League which was established in 1948. Six-point demands were placed by Mujib on February 5, 1966 at Lahore of Pakistan which was actually beneficial for this part of the region. Mujib by the providing six-point demand tried to place them as "non-violence" measures and sought a bloodless, calm and autonomous clarification to attain unconditional sovereignty.

At present we require similar political entrepreneurs like Bangabandhu in the country as some persons are in the deep sea of corruption and nepotism.

During his regime as a head of government, he relentlessly tried to develop the country. As 98 per cent banks, insurance companies, industries were owned by the West Pakistanis, he nationalised them. For smooth progress of the monetary policy Bangabandhu made planned efforts. Similarly for agricultural sector's development he established Bangladesh Krishi Bank. For development of industrial sector he established Bangladesh Shilpa Bank and Bangladesh Shilpa Rin Sangshta. The commercial banking sector was prearranged under six banks. He tried to develop the fiscal policy through initiating pro-people development programmes. The first national budget for the 1972-73 fiscal year, with an outlay of Tk 786 crore, he started rebuilding the country as soon as possible.

The first Five-Year Plan of Bangladesh was unveiled for the period of 1973-78 with the amount of Taka 4,455 crore. The main motto of the plan was to reduce poverty, boost the GDP growth to 5.5 per cent per annum and per capita income at the rate of 2.5 per cent per annum

He tried to develop a skilled human work force and business personnel. He wanted to arrange an equal opportunity for the society. Bangabandhu followed the path of the Meiji Era of Japan who ruled for the 44 years from the year 1868 to 1912. He wanted to protect through   humanity which is free from the abuse by removing dishonesty, violence, oppression and corruption. The constitution came into effect on 16 December 1972 which acknowledged nationalism, socialism, democracy and secularism as the basic main beliefs of the state.

During his regime for the period of three years and a half he tried to establish a classless society. The country was devastated by the war. Re-establishment of law and order situation, rehabilitating the war victims, restoration of the communication system, and feeding the people and other such trouble bedevilled his proper management and administrative rules. Through his magnetic guidance Bangladesh achieved respect from the worldwide neighbourhoods as well as from the United Nations.

Mujib established a unique retort to identify accomplishment of financially viable independence through unification of the whole state. The prices of necessary products were gradually decreasing. Imbued with hope, people came forward to help to avail the benefits of independence to every doorstep. A sovereign nation after nine months of civil war and genocide saw the humanitarian needs infinite and Mujib responded generously.

However, in the early morning on 15 August, 1975 the noblest and greatest of Bengalis with his family members and relatives were killed by the conspirators. Bangabandhu was always in favour of inclusive development to the benefit of all people i.e. at least one will be better off while another must not be worse off. Sad death of this political entrepreneur created a vacuum which can never be filled up as the character of politics now differs.