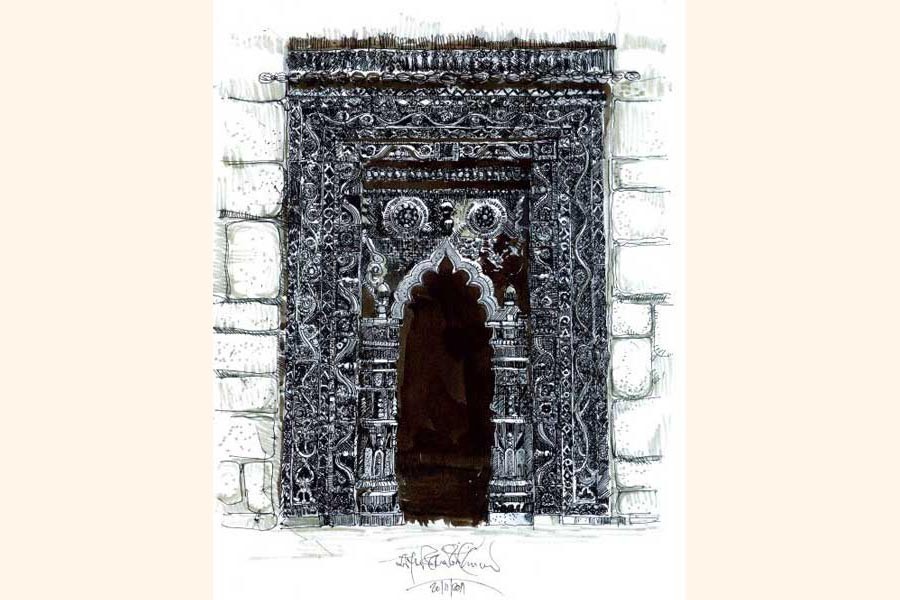 How this special floor derived

Bengal was greatly influenced by the Asia-minor region as well as Persia. Islam became a mission to spread over the hinterland. Sultans adopted the cultural manners of Bengal rapidly. Started innovative constructions in the early phases in the mission of Islam. The sultans started building mosques in the lush green meadow, however without referring to or continuing the huge construction legacy done were practice in Turkey and Iran. With the advent of Sultans mosque entitled as the socio-administrative center of the community.  Men, women and children could enter the mosque to have better counseling.  To carry the leadership manner a seat was positioned and designed as the small mezzanine floor.  The stair of the raised platform was just adjacent to the hall of the mosque. So mosque became the public audience where the takth (special) acted as the throne of the sultan.  In the redfort of Dewani Aam, Delhi, the Mughals Empire Shajahan built chiselled white marble throne with the dochala roofing of Bangla-ghar.

Origin of the archetype

The special floor is the developed mode of the Royal seat from the Delhi sultanate. This arrangement came to the contextual evaluation in Bengal and stands with raised special platform. So it was the inherent part of governance.

What kind of arrangement used to have in the mosque?

Sometimes confusion arises with these two identical terminologies. However these two have separate physical identification or contained with multiuse activities of the special floor. So if you consider the first  situation, the takth is used by the sultan only for the audience, one stair could be approached only towards the special floor. If the stair inside the hall; probably that could be termed as the BADSAHI KA AKTH. If the stair is from outside of the hall; perhaps it is the zenenah special takth (loor). However the special floor eventually acts as multipurpose floor well.

In the context of the hinterland during the medieval time political disintegration was one of the main movement, to assure Islam as the mission in delta; the tiny approach became the sign of global entity for the provincial style of Bengal.

professor and Head of the

Department of Architecture at the