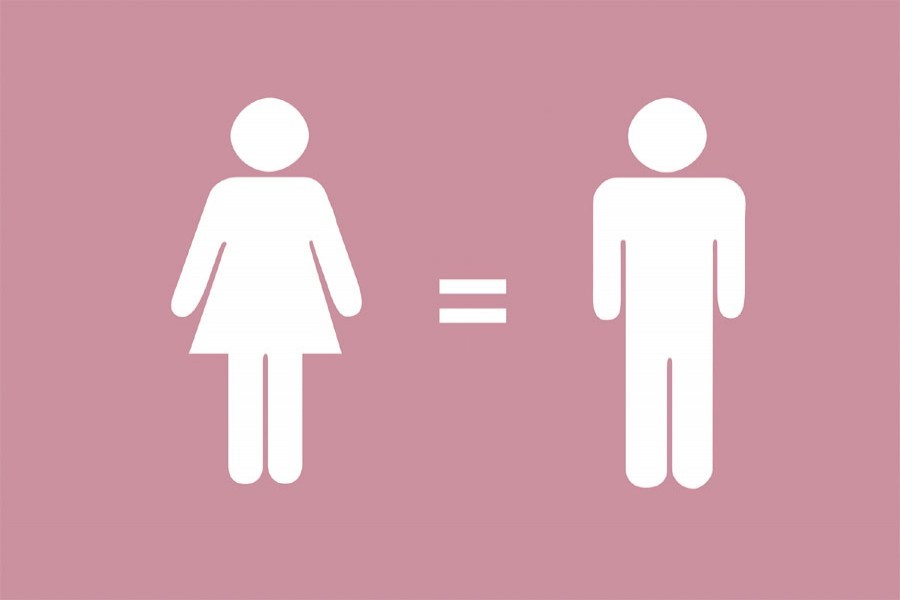 The Madhuri Dixit starrer 'Gulaab Gang' (2014) narrates the tale of an imaginary female hero fighting against male oppression in a village. In her daring mission, she forms a group comprising courageous and daredevil young women. The gang faces myriad types of hindrances created by the powerful males. But the women finally taste victory. In fact, the film's inherent message is attaining a stop to male oppression, discriminatory social norms and gender biases. Males and females cannot survive in isolation. In every activity related to the basic necessities of life, raising families and in facing challenges they need each other. The movie doesn't forget this universal truth. The basic point is giving the perennially suppressed women their due.

Like every International Women's Day, the occasion this year, too, laid emphasis on putting an end to all kinds of injustices the world's women are still subject to. From familial, social, economic to political -- in fact in all spheres of life, the womenfolk continue to get much less than their male counterparts. Irrespective of socio-economic statuses, in nearly all counties this disparity persists. In some societies, the male-female inequality is so deep-rooted that the women have long been accustomed to accepting this reality as their fait accompli. Gestures of revolt and protests by women remain generally unheard-of in these veritably closed societies. Notwithstanding the women's access to all socio-economic facilities, the true picture in almost all the developed countries is similar. Many otherwise competent women in these countries trail men, no matter if the sector is national politics, trade and commerce, the arts or sport. The cases of middle-income and poorer countries are worse, and continue becoming murkier.

The women in Bangladesh have for the last two decades been experiencing steady improvement in their state. Although they still are far from touching the level of uplift specified by international organisations, the Bangladeshi women are found steady in their progress. The percentage of women in active politics, government, entrepreneurship and scores of other sectors in the 21st century is significantly higher than which prevailed decades ago. Yet when it comes to the desired status women should enjoy in a country, the performance of Bangladesh is considered wanting. Except a handful of large political parties, women do not comprise even a third of the workers and leaders in the others. Ironically, the percentage of males and females in the country is clearly divided by halves. In consideration of this fact, 50 per cent of women ought to be in the broader political activities. The target of seeing a third of the female population, 33 per cent being the specific goal as per the Representation of the People Order, in national politics is too humble in nature. Unfortunately, it also remains elusive.

Bangladesh has a highly positive side in respect of self-employment. In the recent decades, women in both rural and urban areas have been seen engaged in efforts to become economically independent in their own ways. The spectacle is strikingly evident in the rural swathes of the country. Although most of them are housewives, an increasing number of enterprising women are seen launching their own initiatives. These are mostly centred on income generation. Since capital is a great problem during the start-up stage, many women enter the scenario quite humbly. While a group of women begin their venture with small poultry farms or kitchen gardens, many others think big from the very start. In the last two decades, village women running handicraft units at home have emerged as a common scenario. Amazingly, few of them fail in their efforts. What is remarkably uplifting is most of these women eventually graduate from home-based small investors to pure entrepreneurs. In reality, entrepreneurship remains latent in a vast section of women in the country's villages. What they need most is the back-up of the male-dominated society. This is where the rural womenfolk falter and lose their enthusiasm.

A woman with dreams to start a commercial venture and eventually become successful has not been unusual in the past in the generally poverty-stricken villages. It started becoming a common spectacle in the concluding phase of the last century. Non-government organisations (NGOs) played a great role in helping village women become self-reliant, and make their entrepreneurial dreams come true. Although operated under their micro-finance programmes targeting the ultra-poor, a couple of NGOs also stood by female entrepreneurial hopefuls by extending loans. Besides, successive governments have extended their financial support to women with commitment and clear goals. With the scenes of women busy engaging in income-generating activities of various types emerging as a new reality in villages, the rural landscape now evidently wears an upbeat look. Besides, despite hindrances of different sorts facing them, girls' school enrolment continues to increase. In many cases, they are also outshining boys in the school-level public examinations. Except harassments by ruffians on way to and return from school, teenage girls find the atmosphere of education in villages highly conducive to them. Lately, the government has laid considerable emphasis on girls' education.

The better state of middle-class urban women is directly linked to their easy access to scores of social and economic opportunities. As has been seen always, city-based women enjoy more benefits compared to village women in general. Those educated and coming from literate families normally enjoy various types of access to job facilities and opportunities. For women with entrepreneurial bent, the flows of bank and other loans prove to be easier. The fast emergence of small and medium urban entrepreneurs tells amply about it. Income generation and self-employment leading to self-reliance is found to be more widespread in the cities and towns. The higher rate of post-school and post-college education has a significant role in ensuring this privileged position for the urban women. Yet they have yet to come free of gender discrimination. This scourge continues to haunt them in every social and economic sector, depriving them of their due share in state benefits.