Army for distribution of relief and registration of Rohingyas 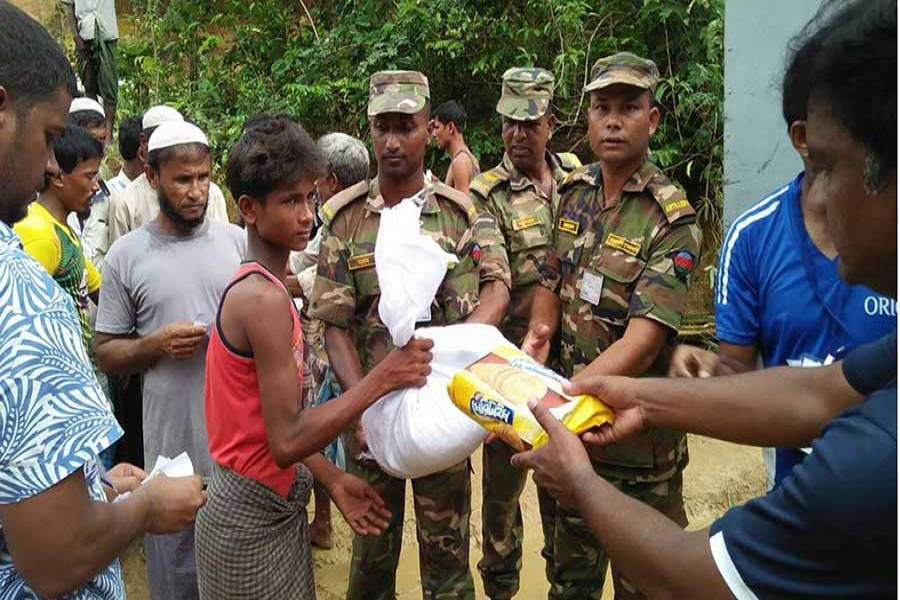 ARMY in any country is deployed to combat a natural or a man-made crisis.  Bangladesh army being no exception has been given by the government the task of registering the hundreds of thousands of Rohingyas who fled their homes in Myanmar and took shelter in Bangladesh. This is a gigantic task and would take months.

Troops would be deployed immediately near the border in Cox's Bazar where more than 420,000 Rohingya Muslims arrived since August 25. They would help build shelters and toilets for them as thousands of refugees still sleep under the open sky or make shift shanties amid torrential monsoon rain. Army is especially required on the spot to construct shelters and toilets for the refugees. Presence of the army is also necessary for smooth and orderly distribution of relief. Previously troops had been tasked with transporting foreign relief supplies from the country's port city of Chittagong to Cox's Bazar where the refugee camps are located. As the number of refugees increased by leaps and bounds, Bangladesh announced it would build camps at a new site capable of accommodating increased number of refugees with additional water pumps and toilets.

We sincerely hope that the Bangladesh Army will render necessary help and assistance consistent with their glorious past to expedite the tasks of registration of refugees and distribution of relief among the displaced Rohingyas.