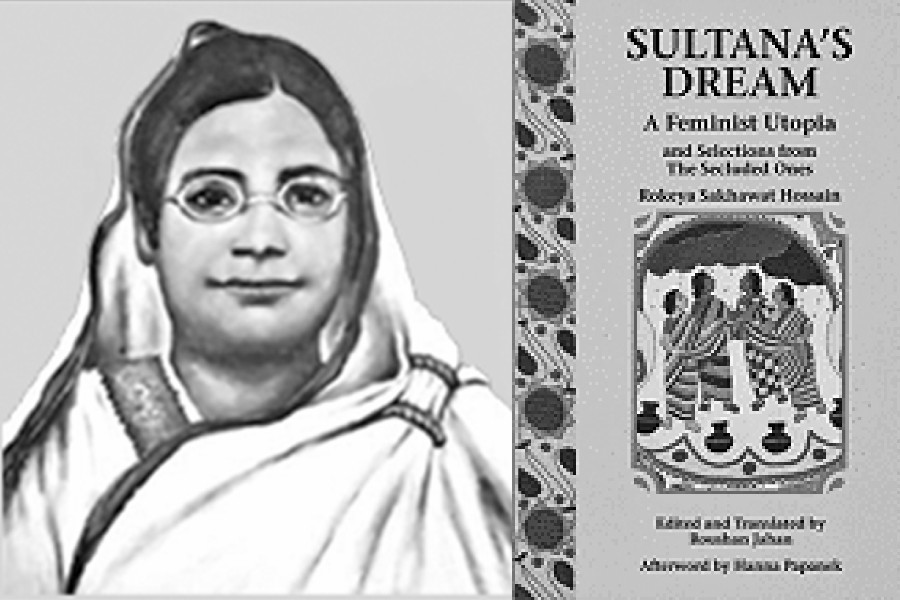 Before the emergence of the feminist movement in the then British colonial Indian socio-cultural ambience, a woman appeared with a lamp for women’s emancipation who is nobody but Begum Rokeya Sakhawat Hossain (1880-1932) who hailed from an aristocratic Muslim family born in 1880 in Pairaband, Mithapukur, Rangpur district of the present-day Bangladesh during the British Raj in India. She is known as Begum Rokeya, Bengali nation’s emblem of women’s awakening. In Bangladesh every year, people along with the government celebrate the 9th December as Begum Rokeya Day in commemorating her and paying homage to this venerable writer’s contribution to women’s awakening from the patriarchal subjugation in a time when there was no right and scope of education for girls and women regardless of caste, creed, and colour. She as the earliest feminist benefactor and a pioneering women’s educationist founded Sakhawat Memorial School for Girls in 1911 in Kolkata, West Bengal, India and a vocational training institute for women. Rokeya in her mission to the wellbeing of the society and the women of all classes, unmasked the distorted, and subjugated images of women to the world imposed by the patriarchal ideology through her writings in various dailies and magazines like Saogat, Mohammadi, Nabaprabha, Mahila, Bharatmahila, Al-Islam, Nawroz, Mahe-nao, The Mussalman, Bagiya Mussalman Sahitya Patrika (The Bengali Muslim Literary Journal), and Indian Ladies Magazine, in the form of columns, essays, short stories, poems, novellas and other literary genres. Her sole purpose was to create popular consciousness and public recognition. The publication of her “Sultana’s Dream” (1905) marks the embryo of the then Indian women’s awakening and a vision for people, workers, leaders, thinkers, educators and the stakeholders who dream of ‘gender equality’.

She dreamt of an inclusive democratic society envisioning a world with both men and women contributing to peace and progress. In today’s 21st century global context, Sultana’s Dream (1905) is very much relevant and appropriate to the womanist movement. Rokeya in this feminist utopia contextualised Ladyland (Kingdom of Woman), a technologically advanced peaceful state ruled by women where men are docile, quarantined, and shorn of power like the women of Rokeya’s India. A symbolic process of positioning women and their metamorphosis from the margin to the centre theorises a postcolonial and deconstructive vision. She did not dissociate men from women’s world like her contemporary American feminist, Charlotte Perkins Gilman did in her utopian fiction, Herland forming a parthenogenesis unisex society. Rokeya celebrates the space for both men and women equally in the society what Simone de Beauvior (1949) voices in ‘gender equality’ “…that all of us, men as well as women, should be regarded as human beings”. Here lies Rokeya’s concept of gender equality. Like Rokeya, today the 21st century globe realises men and women are indispensable parts of global economy and equal beneficiaries. Likewise, the UN’s campaign for gender equality invites everyone to be involved in the progress under the slogan called “He For She” (Watson, 2014). In this regard, Syed Manzoorul Islam, the veteran professor and litterateur of English at Dhaka University in an interview mentioned, “She [Rokeya] is one of the earliest feminist writers of the twentieth century, who came up with a holistic approach to feminism both in its theoretical and pragmatic dimensions. Maybe, that is why many of the American universities like the Illinois State University has included Rokeya’s texts as part of its feminist studies” (Rifat, 2010). Rokeya’s feminist movement differs from today’s version of feminism practised in South Asia. She mingled her own vision keeping pace with the socio-economic and cultural reality of her people. That made her great.

Education is a basic human right and a powerful tool for eliminating the trope of violence and subjugation against women and girls. She delineated gender discrimination, early marriage, extreme forms of purdah (seclusion) in Bengali Muslim society, and social customs without any camouflage in Sultana’s Dream and Padmarag (1924). That’s why, she stressed women’s empowerment through education, because “A scientifically trained eye sees charming and beauteous objects where an untrained eye sees only clay and dust” ( Hossain, 2011, p. 13). In reality, a sustainable progress in a society is impossible without “…emancipating women from the fetters of ignorance…” (Sinha, 1968, p. 251). She in Sultana’s Dream pleads for women’s mandatory education that “…all the women in her country should be educated. Accordingly a number of girls’ schools were founded and …. had separate universities” (Hossain, 2005, p.7-8 ). Seemingly, her dream comes true more or less because, in line with her vision, girls’ schools, women’s colleges, separate women’s universities come into being in Bangladesh, India, Malaysia, Brunei, Pakistan, Singapore, Indonesia, Thailand, Sri Lanka, the Philippines, Afghanistan, Bhutan, the Maldives,  Nepal as well as across the globe.

The is the vision Begum Rokeya enkindled in her Sultana’s Dream more than a century before towards liberating women from a situation when they had “…no hand or voice in the management of our [their] social affairs. In India man is lord and master…. and shut up the women in the zenana” (Sultana’s Dream, 1905). Sadly but not hopelessly, we have miles to go for the sustainable human development of those vulnerable women and girls in this 21st century’s digitalised interconnected globe, otherwise we have to ruminate that “The hand that rocks the cradle is the procreator, the mother of tomorrow; a woman shapes the destiny of civilisation. Such is the tragic irony of fate that a beautiful creation such as a girl child is today one of the gravest concerns facing humanity” (GDCT, 2018).

Are man and animals on a collision course?