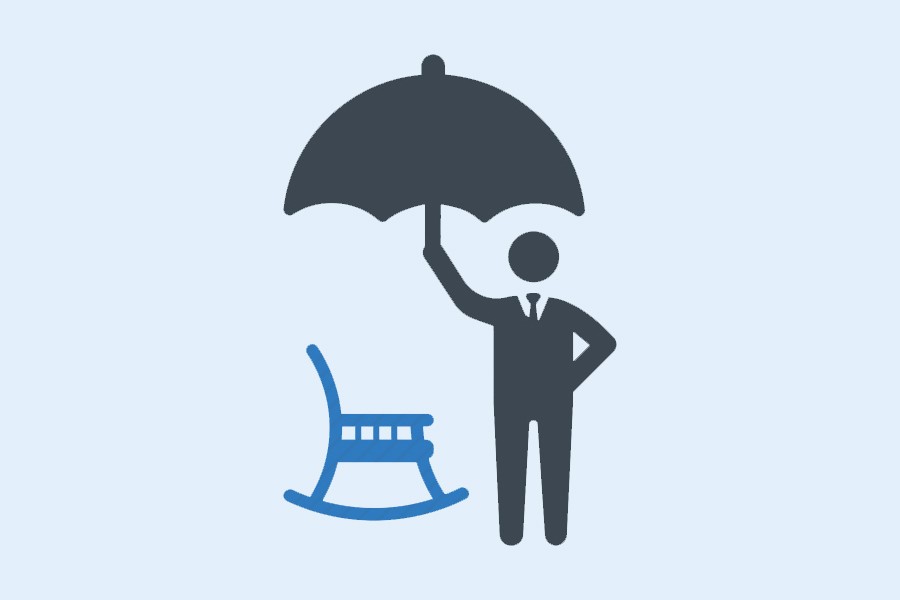 Currently almost 8.50 per cent of the world population is over the age of 65 years. This figure is projected to increase to about 17.0 per cent by 2050. Older people are less likely to work, and traditional sources of support from children and other family members are declining. This means the asset base of the older population is not adequate to finance their needs and poverty incidence among the older population is high. According to available statistics, more than half of Organisation for Economic Co-operation and Development (OECD) countries have old-age poverty rates of more than 10.0 per cent. For half of Latin American countries, the corresponding rates are over 20.0 per cent. Public pension programmes have emerged primarily to alleviate poverty among the older population. 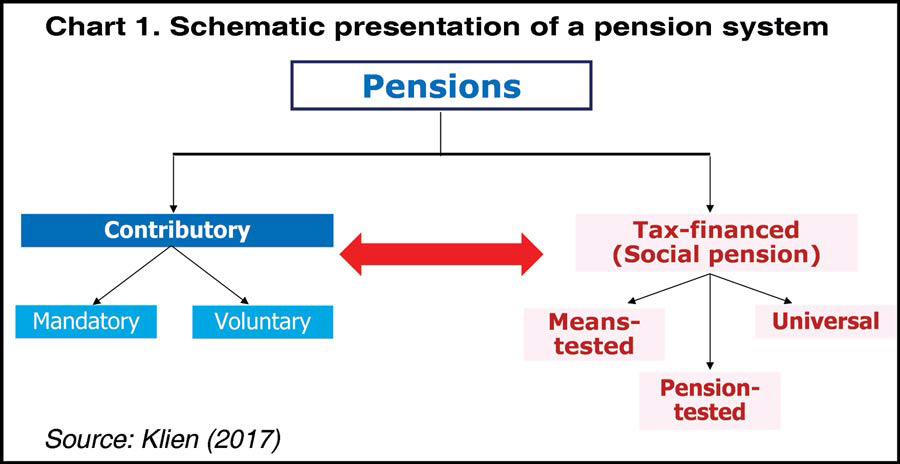 In quite a few countries, public pensions have become an important source of income for the older population. There are now two types of public pension systems. A contributory pension system comprises two streams: mandatory contributions (e.g. public sector employees are mandated to pay a certain percentage of their income into the system) and voluntary contributions. The other scheme is a tax-financed (non-contributory) pension, also referred to as a 'social pension'. This is a regular cash transfer to older people with two main functions - providing a minimum income to assist with poverty reduction and improving the distribution of resources. Eligibility criteria for such schemes include age, citizenship, residency, etc. They have three dominant forms in terms of the selection of beneficiaries or coverage: universal, means-tested (e.g. poverty threshold) and pension-tested (i.e. pension threshold). 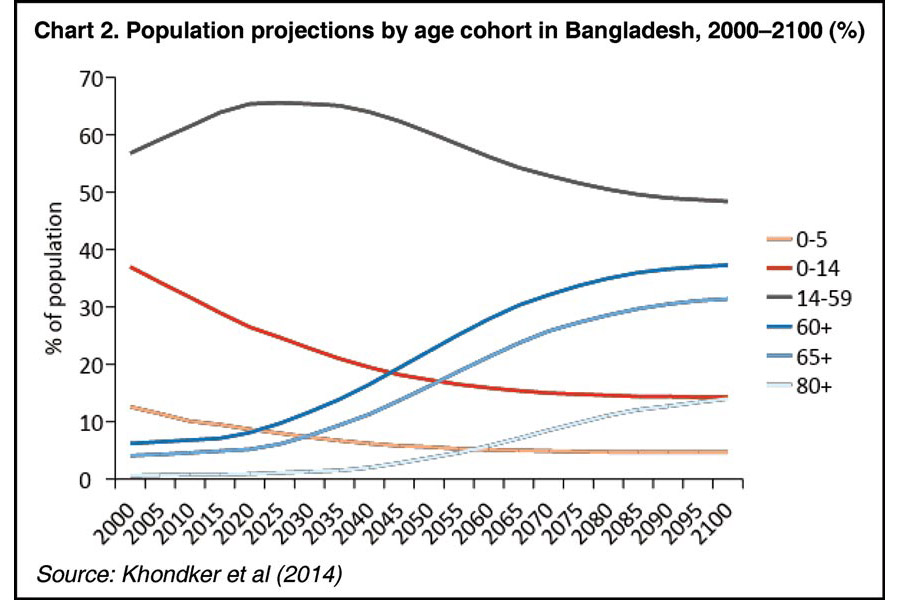 Poverty among the older population is not low in Bangladesh. According to the Household Integrated Economic Survey (HIES) 2016, using the upper poverty line (UPL), the headcount poverty rate among the 60+ population is estimated at 21.90 per cent, against a national poverty rate of 24.3o per cent. The elderly poverty rate increases by about 0.6 percentage points if those aged 65 years and above are considered. Incidence of extreme poverty was lower, at around 12.0 per cent, among the old-age population in 2016. However, members of this group are more vulnerable than the average person, according to 2016 data. Applying the definition of 'vulnerable' groups adopted in the National Social Security Strategy (i.e. vulnerability threshold = UPL x 1.25) shows that vulnerability rates for the 60+ and 65+ population groups are, respectively, 55.0 per cent and 57.0 per cent. 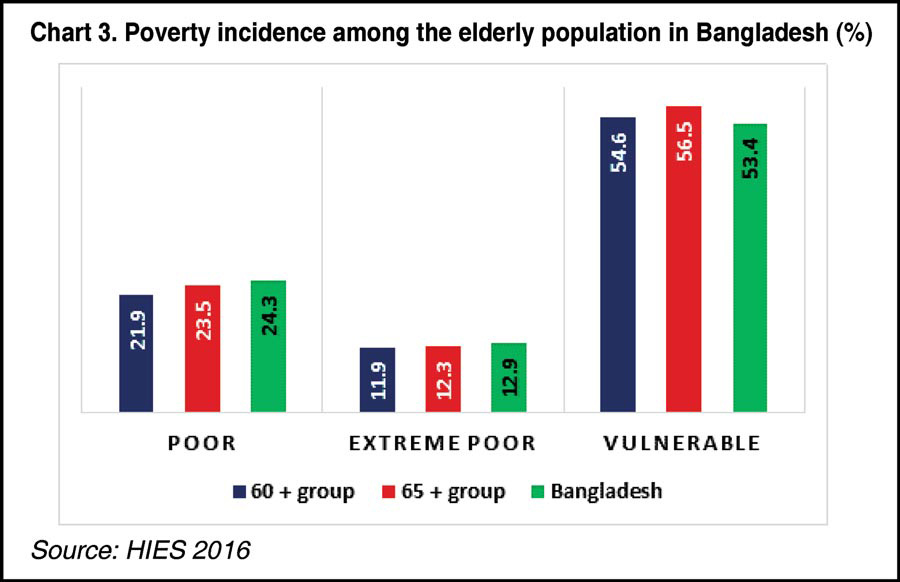 One key factor in old-age poverty and vulnerability is the drop in labour income - as a direct outcome of their reduced participation in the labour market. Chart 4 shows labour force participation across the life course in Bangladesh, defined as the proportion of the population engaged actively in the labour market, either by working or by looking for work. The data suggest a sharp decline in the proportion of both men and women working after the age of 55. For men, the figure drops from 99.6pc between the ages of 35 and 54 to just 54.6pc over the age of 65. For women, who have significantly lower labour force participation rates on average, the figure drops from 43.9% between the ages of 25 and 34 to 12.5pc over the age of 65. The marked dip in labour force participation after the age of 55 correlates strongly with the increase in disability around the same age. These issues have been discussed in studies undertaken by the General Economics Division of the Planning Commission. In addition to disability, discrimination against older workers is another driver of lower labour force participation. Older people can face discrimination in the labour market, such as being denied access to microcredit. A 2008 survey by HelpAge International found that only 19.0pc of older people in Bangladesh were able to access credit, compared with 45.0pc of poor adults. 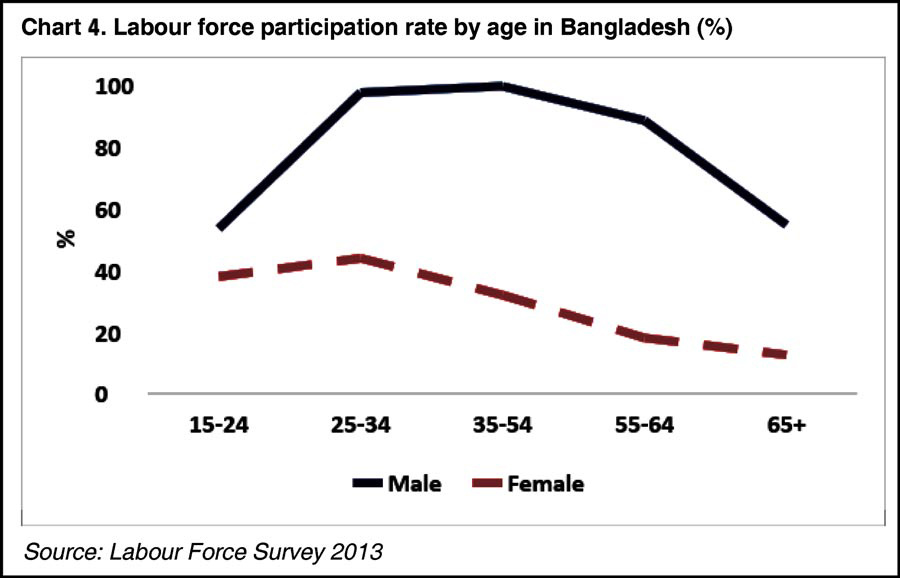 Decreased ability to earn an income in old age suggests that the majority of older people have to depend on other people, personal savings or social protection for old-age income security. The combination of sources of such external support available to individuals will vary significantly. It is likely that most older people receive some form of support from their families, including those who have migrated to other parts of Bangladesh or abroad. Some older people may also have assets they can rely on for some irregular personal income. Barkat et al., in two studies, describe how some older people sell assets such as land and animals to contribute to dowry costs or health costs. Bazlul et al. (2014) provide important lessons that can support policy-making around social protection in old age:

• Economic vulnerability in old age is real, with increased levels of disability and lower rates of labour force participation, with ageing leading to a reduced capacity to earn.

• The consequences of this economic vulnerability are shared by a large part of the population. Nearly a third of the population live in the same household as an older person, while many more people in other households will be part of a web of support to and from older people.

• Old age in Bangladesh has important gender dimensions. Most older women are widows, while most older men are married.

• Divergence in poverty rates by gender points to greater old-age vulnerability among women.

• Most older people in Bangladesh receive no regular income from social protection schemes.

• The key question for policy-makers is whether income security in old age can be left primarily to families or older people themselves in the context of high levels of poverty and vulnerability in Bangladesh.

PENSION SYSTEM IN BANGLADESH: Formal social protection in old age in Bangladesh comprises both contributory and non-contributory schemes. On the contributory side, civil servants and employees of public corporations are eligible for a pension based on their working history. In reality, the civil service pension provides income security for only a small proportion of the population, with around 330,000 recipients (equal to 3.30pc of the population aged 60 and over).

On the non-contributory side, the tax-financed Old Age Allowance (OAA) programme implemented by the Ministry of Social Welfare is a social pension paid to poor older people with no requirement for previous contributions. Coverage of the OAA is much more substantial than that of the civil service pension, with 3.2 million older people budgeted to receive a payment in the financial year 2016-17 (i.e. 30.0pc of the population aged 60 and over). The OAA constitutes one of the most substantial social protection schemes in terms of budget and coverage. The scheme has expanded at a remarkable speed over the past decades. Introduced in 1998, it initially allocated benefits for around 400,000 older people, a figure that had increased by seven times as of 2017. The transfer level has also increased from an initial monthly value of Tk. 100 to Tk. 500 today. Similar poverty-targeted social pension schemes are found in countries such as India, Indonesia and the Philippines.

In addition to its limited coverage, the main problem with the tax-financed social pensions scheme is related to accuracy of beneficiary selection using poverty data. Beneficiary selection for the OAA is inefficient in Bangladesh owing to low coverage and lack of a poverty database. Selection accuracy has two main dimensions in the case of the OAA: first whether a beneficiary meets the age of eligibility and second whether or not they are poor. To assess eligibility on the basis of age, Chart 6 presents the profile of households receiving the OAA on the basis of whether or not they have a member over the age of eligibility. Although not without its limitations, targeting by age is generally considered relatively straightforward compared with targeting that uses other benchmarks, such as poverty. Strikingly, in a third of households there is no person above the age of eligibility. In just over half of these households the oldest member is female. 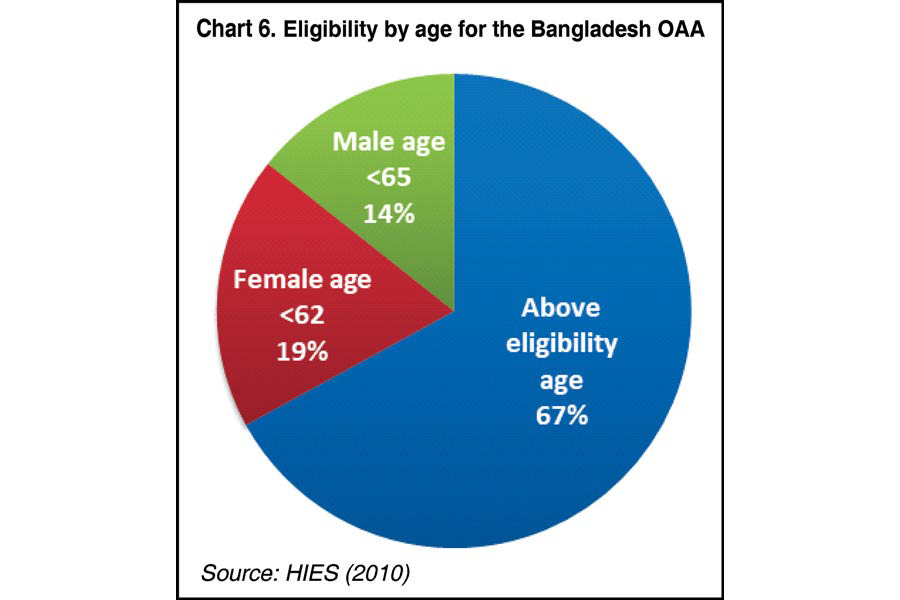 Chart 7 shows the distribution of beneficiaries across expenditure deciles, from the first (the poorest 10.0pc) to the tenth (the richest 10.0pc). At first glance, targeting of the OAA appears to be pro-poor, with more recipient households found in the poorest deciles. Just below 15.0pc of benefits go to the poorest 10.0pc of older people, while around 3.0pc of benefits go to the topmost 10.0pc. The fact that benefits are generally more likely to go to poorer people is neither surprising nor particularly impressive for a programme that is supposedly limited to poor older people. A more useful benchmark for comparison involves asking how close targeting of the OAA is to 'perfect targeting' - that is, a situation where all benefits go to the intended target group. In the case of the OAA, considering that there are sufficient benefits to cover the poorest 30.0pc of older people, perfect targeting would be where all benefits are confined to the lowest three deciles. The reality is quite different, with only 46.0pc of benefits going to the poorest three deciles. The implication of this is that the majority of intended beneficiaries of the OAA are, in fact, excluded, while the majority of benefits can be considered to have been incorrectly targeted according to current eligibility criteria. 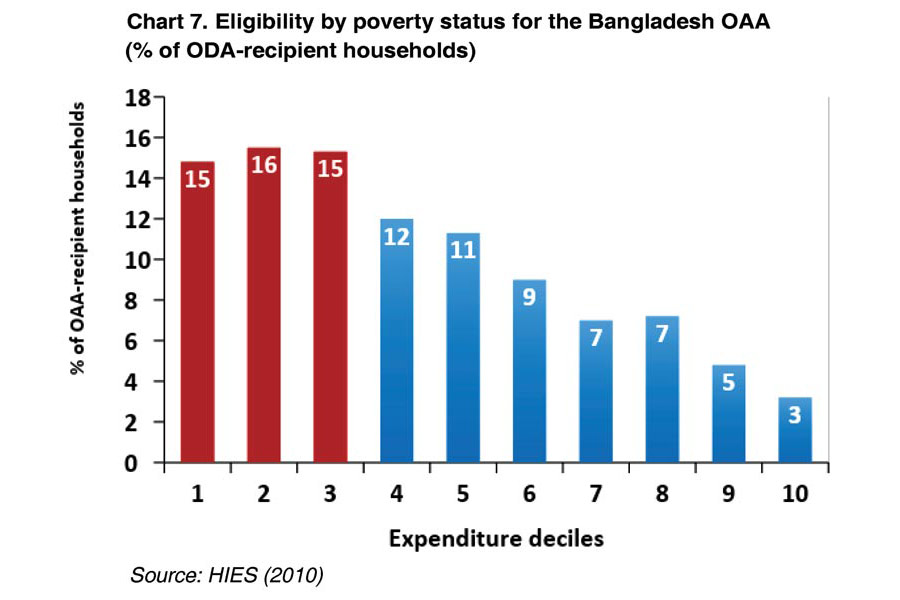 The main implications of the social pension system are as follows:

• Lower coverage based on poor poverty data has led to high inclusion and exclusion errors - both by age criteria and by poverty criteria.

• Generosity (i.e. the transfer amount) appears inadequate given the number of beneficiaries and compared with the public contributory scheme.

• Actual benefits measured in terms of poverty rate and income distribution are far less than potential given inefficiency and the low level of the transfer amount.

Exclusion of deserving beneficiaries is critically dependent on beneficiary coverage: it has been argued that this problem disappears under universal coverage or reduces significantly with a higher level of coverage (i.e. at 70.0pc or 80.0pc). Chart 8 shows the costs of pursuing a universal social pension at different transfer amounts. Even with an assumed 2.40pc annual per capita Gross Domestic Product (GDP) growth rate, the cost of a universal social pension ranges from 0.50pc of GDP in 2013 at a Tk 600 transfer amount to 1.20pc in 2050 with a transfer amount equal to Tk 1,000. The estimated costs seem affordable at the stipulated levels of allowances. There will, however, be questions about such low levels of allowances. 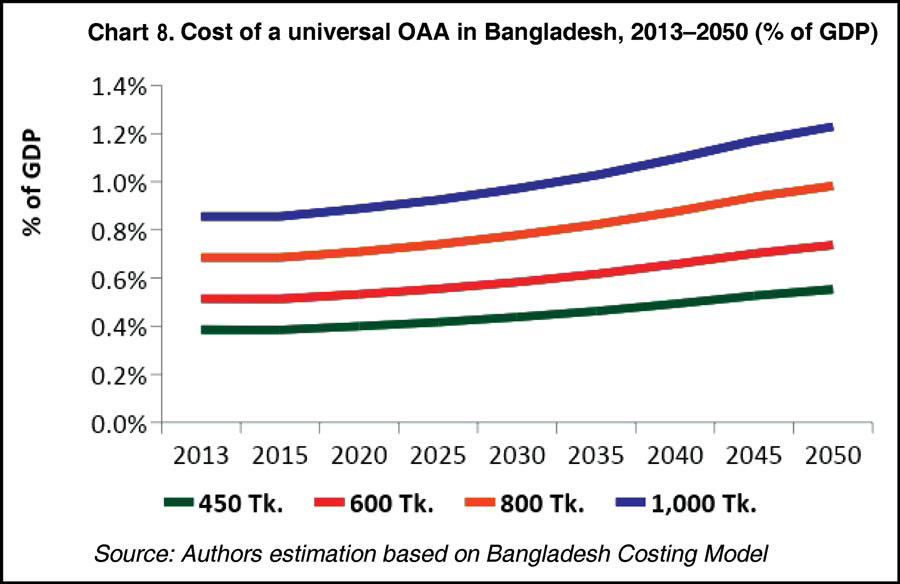 What can Bangladesh do? The following need to be taken into consideration.

• Bangladesh should expand the contributory pension system for private sector employees and self-employed persons. Given the large share of informality in employment (close to 90.0pc), this may be a medium-term option.

• The coverage of the social pension (e.g. the OAA) could be increased from the current rate of 30.0pc to equate the extent of vulnerability (i.e. 56.0pc). This would reduce inclusion and exclusion errors as well as bringing a large segment of the elderly population under the system.

• The monthly transfer amount should be enhanced to the level of the lower or upper poverty lines of 2016 to restore adequacy, and must be inflation-indexed to preserve its real value.

• There is a need to modify the current poverty-targeted social pension to a universal minimum pension, with the exception that individuals covered by contributory pension schemes are excluded. This is preferable to using a means-tested scheme as it saves on costs and is easier to implement. Such systems are in operation in Kyrgyzstan, Moldova, Thailand and Vietnam (for government pensions).

Mohammad A. Razzaque is Research Director of Policy Research Institute.

Dilemma of self-sufficiency or trade openness

Energy Trilemma: The options for Bangladesh

Kushumba Mosque: The gem of Bengal