The first book illustrating life and works of Muhammad (s.) 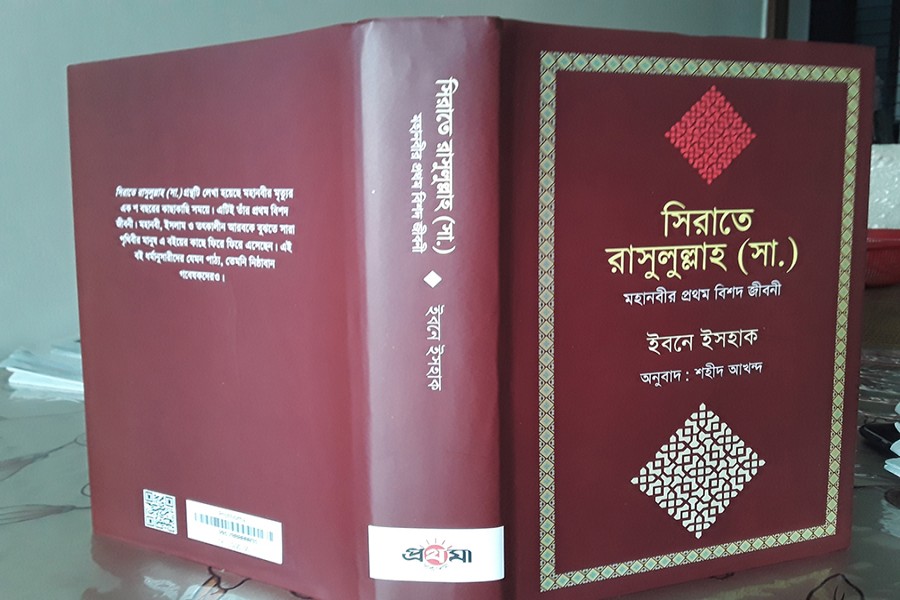 Compiled, written and published in eighth century Arabia, the first translation of the biography appeared in Germany in 1864 by Heidelberg professor Gustav Weil. He translated it into German from Arabic. A few decades later, the first English translation was done by Hungarian scholar Edward Rehatsek. The best-known English translation of the book is Alfred Guillaume's work titled 'The Life of Muhammad: A Translation of Ibn Ishaq's Sirat Rasul Allah.' First published in 1955, it is preferred by those who have difficulty in access to Arabic. Guillaume's work has also been translated in other languages to introduce Ibn Ishaq's pioneer work.

The Bengali translation of Ibn Ishaq's Sirat Rasul Allah first appeared in 1987. Islamic Foundation in Dhaka published it in three parts - two parts in 1987 and third part in 1992. Translator Shahid Akhand has done the daunting task. He has followed Guillaume's English version. In 2017, the book was republished by Prothoma, a leading publication house in the country. This is a revised and unified version of previously published three-part translation. It has also drawn greater readership as fifth reprint is now in the market.

It is also important to know the method and practice of collecting or compiling historical events in Arabia during that time. Arabs used to rely on their memories and tradition of oral description of the events of past. There was very little written record of events during pre-Islamic era. After the emergence of Islam, the practice of keeping records in the written form started slowly. Moreover, Prophet (S) ordered not to write his statements and instructions to avoid the risk of mix-up with the verses of Al-Quran. Instead, Shabah or Companions of Prophet (S) and Tabuin followed the Arabic tradition of memorising and oral transmission of Hadith. That's why it took almost one and a half decades after the death of Prophet Muhammad (S) in 632 AD to start the process of compiling Hadith in the written form. Meantime, a tradition of maghazi and sira developed to describe the life and works of Muhammad (S). Maghazi focused on his military leadership and also included some non-military aspects of his life. These were in a scattered-written form. Later more detailed writing on the life of Prophet (S) started. It was termed as Sira. Sometimes there were also a few overlaps with Hadith.

Ibn Ishaq was born in Medina in 704 AD. His father's name was Ishaq and so he was known as Ishaq's son (Ibn in Arabic). His family was active in Maghazi transmission and he got trained on it. He studied in Alexandria at his age of 30 and returned to Medina. Due to his dispute with Malik Ibn Anas or Imam Malik, the founder of Maliki school of Islamic jurisprudence, Ibn Ishaq was compelled to leave Medina. He finally settled in Baghdad where new Abbasid dynasty, after overthrowing the Umayyad dynasty, was building a new capital. Caliph Al Mansur assigned him to write a comprehensive history book starting from the creation of Adam to the present day. Sirat Rasul Allah is probably the part of the work but the original text of Sirat did not survive. Al Bakkai, a student of Ibn Ishaq, made his own edition of Ibn Ishaq's book. Al Bakkai's student Ibn Hisham, who again revised and edited al-Bakkai's edition.

In this process, substantial part of Ibn Ishaq's Sirat was copied and used into a work of Ibn Hisham, the author of Sirat al-Nabawiyya. Here, Ibn Hisham annotated some of the Ibn Ishaq's texts and also reproduced some texts as his own and finally altered and changed some texts. Guillaume argued that changes made by Ibn Hisham are largely identifiable and possible to delete. In this way, at least a part of original text of Ibn Ishaq could be found. Again, Jaria al-Tabari in his famous book T?r?kh al-Rusul wa al-Mul?k or History of the Prophets and Kings extensively cited and quoted the work of Ibn Ishaq. Some of those quoted texts were missing in Ibn Hisham's work. The fact is that what is popularly recognised as Ibn Ishaq's Sirat is basically an edited (and to some extent altered) version prepared by Ibn Hisham.

Guillaume's English version is also not free from errors and distortions. On translation, he took assistance from a number of Arabic scholars including : Professor A A Affifi of Alexandria, Professor A Kh Kioani of Damascus, Dr Abdullah al-Tayib of Khartoum, Dr M A Azzam of Cairo, Professor A K S Lambton of London and Dr W Arafat. Nevertheless, as critics argued, on translating from Arabic to English, in some places the translator failed to put the correct meaning. It is due to nature of Arabic language where very small deviation of any word or text may appear as a different or distorted meaning.

The Bengali translation in hand is a book of more than 700 pages and divided into three parts. The first part is 'The Genealogy of Muhammad (S); Traditions from the Pre-Islamic Era; Muhammad's (S) Childhood and Early Manhood.' Second part is 'Muhammad's (S) Call and Preaching in Mecca.' The third and final part is titled 'Muhammad's (S) Migration to Medina, His Wars, Triumph and Death.' As a matter of fact, the final part occupies almost two-thirds of the book.

The most distinguished feature of the book is Ibn Ishaq's clear doubt about many of the events, related to life and works of Prophet (S.), described by others. Though Ibn Ishaq quoted or referred to them, he clearly mentioned that someone said or claimed to have witnessed the event indicating that he himself was not sure about the description. In some cases, Ibn Ishaq clearly mentioned that 'only Allah knows well.' Thus the writer accommodated many of the popular events widespread in Arabia but cast doubt as he couldn't verify the authenticity of those or to him those appear non-realistic. While a number of biographers in later decades appear as emotional devotees instead of logical and inquisitive researchers, it was Ibn Ishaq, the first biographer of Prophet (S) who tried to focus on logical and coherent description within his limitation. So, it is an example. Not that he was always beyond emotion. But while doing his work he was less emotional and provided guidance to future biographers on dispassionate writing.

In Bengali, the most popular biography of Prophet (S.) is 'Bishwanawbi' (The Prophet of the World) by Golam Mostafa, a poet and Islamic scholar. It is the first Sirat in Bengali literature. Due to lucid poetic language coupled with detailed description and analysis, Bishwanawbi has become immensely popular to different levels of readers since its first publication in 1942. Golam Mostafa used works of Ibn Ishaq, Ibn Hisham, Shibli Nomani and many others as references. He, like Ibn Ishaq, also tried to be less emotional and substantiated his propositions and arguments mostly based on facts and logics.

The latest Bengali version of Ibn Ishaq's Sirat is a valuable contribution to the research on, and understanding, the life and works of Prophet Muhammad (S). Shahid Akhand takes a painstaking job to translate the magnum opus as lucidly as possible. One shortcoming of his work is he didn't translate the entire introduction, 33 pages, written by Guillaume in his English version. Though the Bengali translator mentioned many things from Guillaume's introduction, it failed to accommodate many critical areas. Another shortcoming in the current Bengali translation is non-inclusion of the section 'Ibn Hisham's Notes' from Guillaume's book. The reason may be to avoid any unpleasant debate. Which edition (or editions) of Guillaume's work has been used in translation should also be mentioned. Despite some limitations, the Bengali version of Ibn Ishaq's Sirat will definitely help many to know and understand the Great Prophet (S) in a better way.