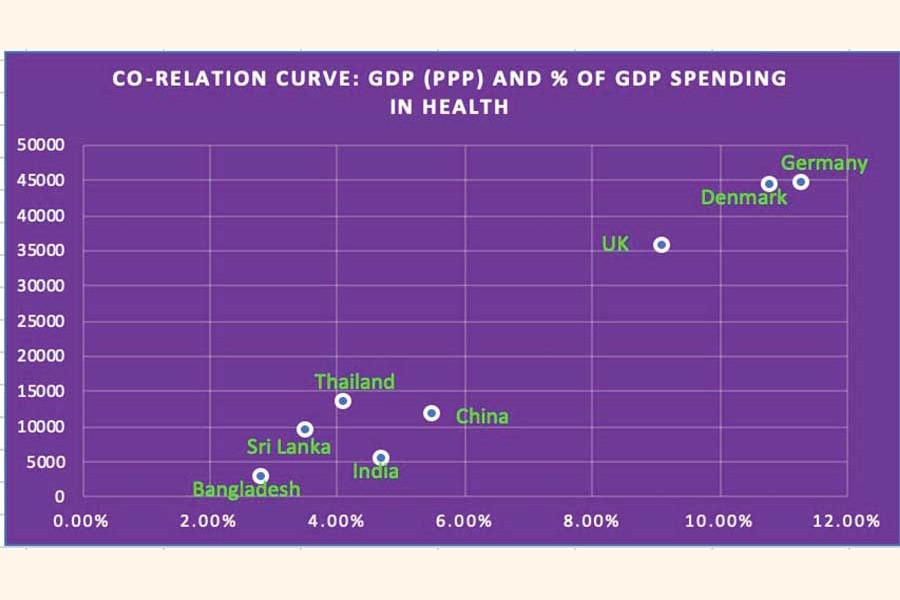 An article in a leading Bengali daily titled "The lion's share of the money for healthcare overseas is going illegally" should be regarded as ominous.

The article ends with the conclusion drawn by a learned former governor of Bangladesh Bank that certification by doctors for application for foreign currency for buying medical care in the neighbouring countries should be abolished as the process is tedious. Recommendation by a medical board can be bewildering, usually not willingly offered by Bangladeshi medical practitioners and hence should be discarded.

His statement begins with a factual veracity that attempts to expose the tip of a massive iceberg. Unchecked the iceberg potentially can create economic consequences from which Bangladesh may never recover. I am not scaremongering as I shall be explaining systematically the process of my statement with scientific and researched evidence.

The former BB governor states the obvious thing that if international standard medical care existed in our country, if the quality of medical care improved in Bangladesh our patriotic people would not enlist their names arduously in the endless queue of medical tourism.

However, sadly instead of continuing on the topic of quality and improvement of medical care in our country he opts for the easier way out of making payment for purchase of medical care overseas legally accessible.

I am not surprised that even someone of his experience and intelligentsia involved for a considerable period in the policy domain of our nation may not wish to venture into the dark alleys of the complexity and jigsaw of the medical politics.

But his implicit message is crystal clear: improve medical care in Bangladesh up to the international standard. To the majority this is abstruse, shrouded with ambiguity and is sequestered, best left alone.

However, it is time to stop being ostriches, cease this mystical self-delusion and face the danger head on as absence or paucity of quality medical care affects our geo-political and socio-economic perspective in multiple dimensions.

Bangladesh has witnessed significant gains in the primary healthcare sector under the leadership of the government and the non-government organisations since 1972 till now, undoubtedly consequent on Bangladesh's Constitution, which at its very inception guaranteed Nutrition and Public Health to its Citizens (Clause 2, Sub-Clause 18, Constitution of Bangladesh 1972).

Margaret Chan, director general of the World Health Organisation (WHO), has stated that "The Bangladeshi story shatters the long-held assumption that countries must first reduce poverty, then better health will follow almost automatically. Bangladesh decided to reverse the order by first freeing populations from the misery caused by ill health."

A statement by Professor Hans Rosling, the Swedish doctor, academic, statistician, and professor of International Health at Karolinska Institute, co-founder and chairman of the Gapminder Foundation, which developed the Trendalyzer software system and promoted the use of data for exploring world development issues, termed health achievement in our country as "Bangladesh miracle, the minimum investment in health with maximum benefit harvested".

The improvement in health has directly resulted in "demographic dividend", increasing the share of the total population that works as a result of the number of people entering adulthood substantially exceeding the number of children being born.

However, the joy of demographic dividend is going to be short-lived as the situation consequent on the "demographic transition" secondary to the success of health gains so far, 'the causal burden of disease' is not being appreciated by the nation, the government and its policy makers.

Discussing with the relevant personalities the author discovered that the number of Bangladeshis seeking medical care in those neighbouring countries nonetheless shot up two and a half times to three hundred and fifty thousand patients in recent times and the estimated cost climbed to 4 to 5 billion US dollars.

The author or the people involved in the estimation, however, fail to consider the significant difference between the price of medical care in 2012 and today.

In today's price, the total cost of 'medical tourism' would soar up perhaps to 15 billion (range 12 to 20 billion) US dollars.

The most devastating consequence of unavailability of standard medical care in Bangladesh is the sheer proportion of the population suffering from chronic ill-health.

This is accentuated by the increase in premature deaths from non-communicable diseases (NCDs) over next decade.

In its analysis of probability of premature deaths from NCDs by WHO, Bangladesh is the only country in the region where probability rises in contrast to the fall in all others (Thailand, Sri Lanka, India and even Pakistan).

The other important barrage consequent to the deficit of high-quality medical care potentially would plunge the economy into deeper encumbrance by a phenomenon of 'Health Shock', affecting the wage-earning capability in addition to the direct medical cost of unpredictable illness afflicting a member or members of a family.

'Health Shock' is one of the most important factors forcing limited income families in Bangladesh into serious destitute state, payment for the 'Health Shock' often stretches household's 'capacity to pay' and pushes many households into poverty.

Depending on the severity of the illness, people borrow with high interest, mortgage assets, sell land and livestock, withdraw children from schools and employ them to cope with the added financial demand.

A BRAC study has demonstrated that up to 8 million people are pushed into poverty from reasonable economic capability.

It is also well-known that economic growth and development are directly co-related to the proportion of GDP invested in health and education and co-relation curve is much steeper than that of education indicating faster effect, beneficial or adverse, on the economy.

The curve, unfortunately does not consider the proportion of GDP going out of our economy into those of our neighbours.

In real term we spend more than 6 per cent (2.8 per cent in Bangladesh plus 3.5 per cent overseas), equivalent to that of some of the upper-middle-income economies.

So, clearly there already exists the potential for Bangladesh to achieve the status of upper-middle-income economy in the very short term.

However, the situation is made complex by the fact we are unable to simply divert the proportion of the GDP that is going out due to the immediate absence or paucity of high-quality medical care existing in Bangladesh.

Acquiring international standard in medical care is conceptually and financially simple and viable and would require careful and well-planned improvement in delivery of medical care through appropriate education and training of health care professionals with only a small proportion of finances being spent on medical tourism and nothing else would do.

The writer is President and Managing Director of RAHETID, Royal College of Surgeon Partner Hospital, Education and Training Institute.

Rising trend in consumption of oils and fats in Bangladesh

Inequalities in human development in the 21st century