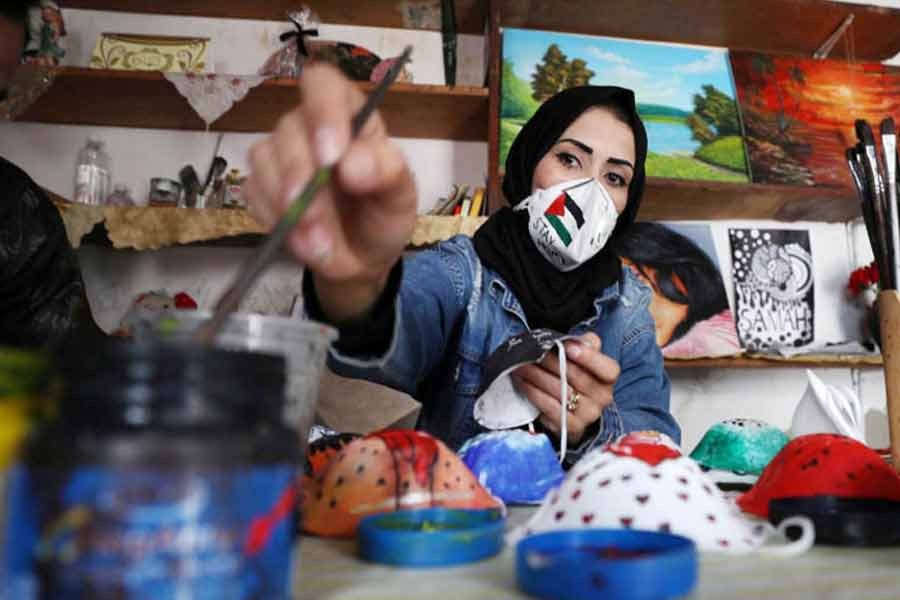 A Palestinian artist paints protective face masks to encourage people to wear them as a precaution against the coronavirus disease (COVID-19), in Gaza City      —Reuters Photo

The pandemic struck at a particularly distressing time for the Occupied Palestinian Territory (OPT). Even before it hit, forecasts for the Palestinian economy in 2020 and 2021 were already bleak, with GDP per capita projected to decrease by 3.0 per cent to 4.5 per cent, according to the report.

High poverty and unemployment rates had persisted and GDP per capita declined for the third consecutive year as the Palestinian economy continued to slide in 2019 and the first half of 2020, the report says.

In 2019, real GDP grew by less than one percentage point, not better than the two preceding years. The West Bank registered its lowest growth rate since 2012 (1.15 per cent), while Gaza's growth was virtually zero as it failed to rebound from the two consecutive GDP contractions of -7.7 per cent and -3.5 per cent in 2017 and 2018 respectively.

AN ECONOMY UNDER SIEGE: UNCTAD routinely assesses and reports on the economic costs of the Israeli occupation for the Palestinian people, as requested by several UN General Assembly resolutions.

In addition, in March of this year a new annual deduction of US$144 million from Palestinian clearance revenues has been put in place - equivalent to the payments made by the Palestinian National Authority (PNA) to families of Palestinians in Israeli prisons or killed in attacks or alleged attacks against Israelis.

The fiscal standoff weighed heavily on the economy and constrained GDP growth. The impact of the fiscal loss to occupation has been compounded by the substantial decline in donor support to the PNA. Donor budget support fell from a high 32.0 per cent of GDP in 2008 to 3.5 per cent in 2019.

The measures imposed by Israel, decline in donor support, and the ensuing poor economic performance, have resulted in a significant deterioration of socio-economic conditions in the OPT, the report notes.

COVID-19 DEEPENS THE ECONOMIC PAIN: Lockdown measures to control Covid-19 since it was reported in the OPT in early March have had grave fiscal implications. Barely a month after the outbreak, revenues collected by the PNA from trade, tourism and transfers declined to their lowest levels in 20 years.

The fiscal impact is heightened by the additional expenditure on health, social welfare and support for the private sector necessitated by the pandemic.

Furthermore, the Palestinian economy has been highly dependent on official and private transfers. Both, however, are projected to decline in the aftermath of the pandemic. Donor support in 2020 is expected to fall to about $266 million, the lowest in more than a decade.

Various estimates on the cost of the pandemic point to an economic loss in the range of 7 per cent to 35 per cent of GDP, depending on forecast assumptions about the severity and duration of the pandemic. Fiscal revenues are expected to nosedive in tandem with GDP.

Under occupation, the PNA lacks the policy space and economic policy tools to deal with the massive challenge posed by the pandemic. It has no access to external borrowing, no national currency, no independent monetary policy and no fiscal space.

"The international community should urgently redouble support to the Palestinian people to enable them to cope with the economic fallout from the pandemic. There is no alternative to donor support for ensuring the survival of the Palestinian economy," UNCTAD Secretary-General Mukhisa Kituyi said.

PALESTINIAN WOMEN PAY THE HEAVIEST COST UNDER OCCUPATION: The report highlights the distinct plight of Palestinian women under occupation. It maintains that the dynamics of occupation affect demographic and regional groups in different ways, with women, youth and Gaza suffering the most.

Under occupation, the agricultural sector has diminished with the continuous loss of land and water. Its share in GDP declined from 35 per cent in 1972 to 4 per cent in recent years.

Palestinian women have paid the heaviest cost, as the decline of the agricultural sector has deprived them of opportunities in their traditional sector of employment, with no alternatives emerging in the post-occupation era.

Furthermore, women are affected differently by other occupation practices such as house demolitions and barriers to movement, which limit their participation in education and the labour market.

In some areas, parents hesitate to send girls to school permanently or during security crises. This results in low attendance and high dropout rates. The cumulative effects place women at increased risk of poverty and marginalisation.

SETTLEMENTS' FACTS ON THE GROUND AND LOOMING ANNEXATION: By the end of 2018, there were 150 settlements and 128 outposts in the West Bank, which according to UN Security Council resolutions 2334 and 476, constitute flagrant violations under international law.

The UNCTAD report warns that the looming de jure annexation of settlements by the occupying power, if it proceeds, would deal a devastating blow to the two-state solution and undermine prospects for peace in the region.

In 2019 and early 2020, the occupying power accelerated the construction of settlements even though they are illegal under international law.

To make room for settlement expansion, the Israeli zoning and planning regime makes it nearly impossible for Palestinians to obtain permits to build in their own land for any purpose. Palestinians are thus forced to build without permits at the risk of punitive demolitions at their own expense.

In 2019, Israel demolished or seized 622 Palestinian structures in the West Bank, including 127 intended for humanitarian assistance.

Demolition is a traumatic experience that results in poverty, displacement, loss of shelter, family separation, psychological distress and deprivation of basic services such as health care and education.

Meanwhile, by 2019, more than 1.0 million of Palestinians' productive trees had been destroyed by occupation since 2000.

Living with the Covid-19 pandemic

A long, uneven and uncertain ascent

An epitome of global heritage

Coronavirus and sliding Indian economy: What's the way out?

The legal environment and the SME sector