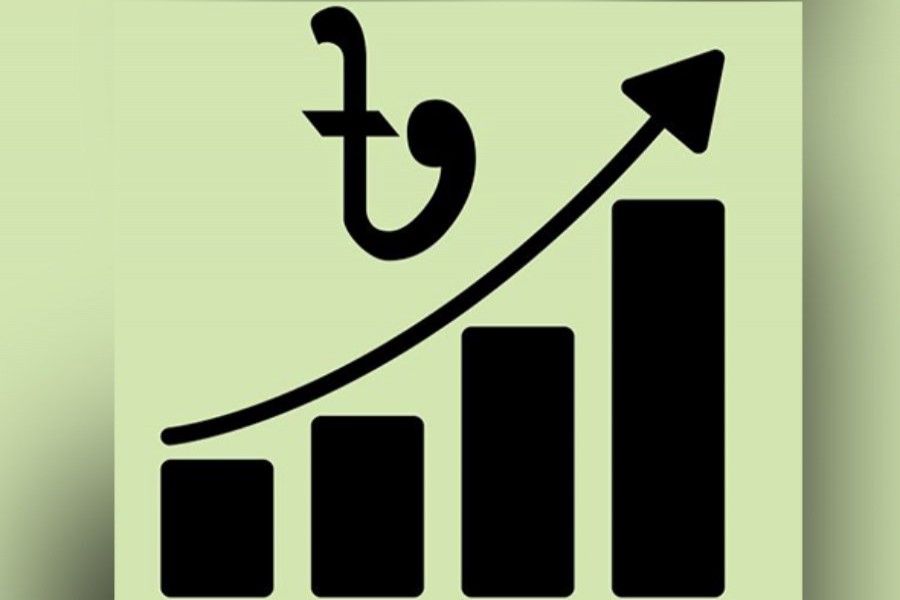 All goals of Bangladesh Delta Plan (BDP) 2100 are directly or indirectly related to the UN Sustainable Development Goals (SDGs). It must be mentioned that all six BDP 2100 goals are fully linked with SDG Goals 2, 6, 13 and 14 and partially linked with Goal 1, 5, 8, 9, 11 and 15. This linkage supported by appropriate interventions and policy will be continued in the upcoming 8th Five Year Plan (FYP). The 2nd Perspective Plan (2021-41) in achieving the Bangladesh's Vision for 2041 coincides with the Bangladesh Delta Plan, in terms of temporal space-the plans share 20 years of shared implementation period. More importantly, they share some common goals and visions to create an 'Environmentally Sustainable and a Climate Resilient Delta Nation'.

PLANNING OUTCOMES SO FAR: In following areas the county is on track

- The industry sector is experiencing double-digit growth as was targeted.

- Budget deficit maintained below 5.0 per cent of GDP (gross domestic product) as targeted.

- Government spending on social protection has been increasing in line with the target.

- Net enrolment rate particularly, for girls in primary education and lower secondary level, is fully consistent with the target.

- Although net completion rate of primary education has increased from the base year, it is marginally below the targeted rate.

- Percentage of urban and rural populations with access to safe drinking water is increasing but still falls behind the target.

- 93 per cent of households now have access to electricity which was only 47 per cent before 2009.

- The major issue of sustaining the growth is having little buoyancy in private sector investment, but falling behind the target.

- Bangladesh has one of the low tax-GDP ratios in the world. The last two years' revenue performance is far below than expected. Nevertheless, the tax revenue in FY2016-17 and FY2017-18 registered 10.2 per cent and 9.60 per cent growth rate respectively.

- Although public investment has performed relatively well, government spending has to be increased further.

- Percentage of schools that meet the Student-Teacher Ratio (STR) standard of 46:1 (per cent) is 61.8 against the benchmark 70.

- Serious attention is required for sluggish Contraceptive Prevalence Rate (per cent) and birth delivery management (62.0 per cent, target is to attain 75 per cent during the 7FYP period).

CHALLENGES TO BE FACED: Though Bangladesh has made significant progresses in many sectors over the past decade, still there are many challenges. The major challenges are summarised below:

- Another major challenge remains in the area of investment climate. Traditional sources of funding are insufficient to implement the SDGs and Bangladesh Delta Plan 2100. The government needs to find innovative ways of financing both from the public and the private sectors, development partners and ensure effective and efficient utilisation of funds. Moreover, implementation of the 7th plan requires total investment of 34.4 per cent of GDP by 2020, of which private sector is expected to provide 26.6 per cent of GDP. According to Bangladesh Delta Plan, the investment for climate change, environment and water related projects account for 1.8 per cent of GDP by 2020. The resource gap is yet huge; public spending is only 0.8 per cent of GDP on water sector projects, which has been highly inadequate. The government has a plan to establish 100 economic zones to attract domestic and foreign investment. Nevertheless, the first and foremost priority is to provide utility services like gas and electricity to the investors.

- Bangladesh has been experiencing a rapid increase in urban population; in 1990, 20 per cent of the population lived in urban areas, this has increased to 35 per cent in 2016 (45,000 per sq.km.) and it is expected to overtake the share of rural population by around 2040.

- Comparatively, Bangladesh has one of the lowest tax-GDP ratios in the world. Efforts are being made in recent years through reform process. Without, adequate domestic resource mobilisation, implementation of medium term plan and SDGs will be a far cry from what is targeted. As far as the private sector is concerned, a strong and supportive capital market has to be nurtured to foster the growing need of capital for investment.

- Environmental degradation is becoming alarming day by day, although steps have been undertaken. The situation of forest coverage is well below the mark, and is currently 13.4 per cent (dedicated forest), requiring considerable attention.

- Official Development Assistance (ODA) still plays a significant role for Bangladesh, particularly in infrastructure and capacity building. But many development partners are shifting their priorities and modalities in the light of macro-economic and social progress achieved in the country, which has resulted in gradual increase of loans and decrease of grants. The shares of grants and loans in the total disbursed foreign aid were 90.5 per cent and 9.5 per cent in FY 1971-72 which was at 12.5 per cent and 87.5 per cent respectively in FY-2016-17. The share of bilateral aid has decreased from 85.7 per cent in FY 1971-72 to 31.9 per cent in FY 2016-17.

- One of the grave concerns in term of export is the concentration of export basket to a few items which make exports vulnerable to change in global political and economic situation.

- Although Bangladesh for the first time has been placed in the top 100 (99 out of 137 countries) in 2017 in the World Economic Forum's Global Competitiveness Report, corruption is still the major obstacle for doing business in Bangladesh. Bangladesh has to keep up the momentum of on-going reforms to make business climate smoother reducing the transaction cost substantially. The realisation of One-stop Service Act-2017 will be a landmark step in attracting investment from abroad.

- There is no alternative to improving governance in order for growth to be more sustainable and pro-poor. Bangladesh has made notable progress in governance indicators, still there are scopes for more improvement. Governance issue is particularly critical in the use of public resources, service delivery of institutions, transports, law enforcement, judiciary, land administration, tax and customs. Digitalisation can be an effective tool to address these governance challenges.

- Inequality in the country has been on the rise across and within regions, in particular since the 2000s. Spending in the health sector in Bangladesh in global comparison is low. Both the rise of communicable and non-communicable diseases has put the policymakers in the dire challenge of delivering basic health services for all at an affordable cost.

- Child marriage (59 per cent, highest in South-Asia) prevents girls from realising their educational and earning potentials. Bangladesh has the world's highest teenage fertility rate (113 per 1000 women)-- outside the African continent. Gender based violence and gender discrimination remain major barriers to materialise full potential of the country's female population.

- To keep continuing the pace of development, investment outlook for the private sector needs to be improved significantly. In doing so, the government has to provide sufficient infrastructures including power.

- Activities related to social developments, including health and education, should remain the core area of the development policy along with increased coverage of the social safety net programmes to address extreme poverty for smooth transition. The education system in Bangladesh underwent a number of experiments in the last couple of decades, yet it calls for further reform in the area of providing quality education.

- The country has very low budgetary support for research that is well below 1.0 per cent of GDP. In order to be an upper middle income country, the government will have to increase allocation for research, innovation technology, along with being supportive to private sector

- Various regulatory policies would need to be more business and trade friendly by reducing cost of doing business and exporting from Bangladesh.

- Increased effort is necessary to diversify exports in order to reduce vulnerability of the economy.

- Structural risks like high poverty and inequality, low human capital and weak economic governance have to be tackled effectively and minimised to a reasonable level.

- Engaging the Non-Resident Bangladeshis for investment in Bangladesh in meeting the FDI gaps.

- Introducing one stop service for business investments will be a breakthrough in the area of competitiveness. Development partners should come forward to help Bangladesh in technology transfer in the spirit of goal 17 of the SDGs.

- Despite progress in reducing poverty head-count rates, around 33.6 million (2018) people still live in poverty and approximately 16.64 million (2018) live in extreme poverty (with $1.90 a day). Inequality has to be brought down to attain SDG-10. That is, average income growth of lower 40 per cent of the population must be higher than the average income increase of overall population. Further, inequality should not be limited to just income poverty.

- It is undeniable that the country saw a rise in female participation in the labour force over the last decade, yet the participation rate is just 36 per cent -- well below the global average of 49 per cent.

- Technology, research and innovation remain one of the major drivers for sustained growth. Hence, the urgency of creating an environment for leapfrogging in ICT and promoting the growing ICT penetration is crucial.

- Bangladesh aspires to graduate from the Least Developed County status by 2024. For this, there is a need for a clear roadmap, cost assessment and strategy for coping with the changed scenario in respect of trade.

The implementation of 7th FY Plan, SDGs and Bangladesh Delta Plan 2100 will largely rely on the combination of the three factors namely resource mobilisation, improved governance and forging cooperation among all parties. The resource flow should reflect the effort of the government, commitment of development partners and increased responsibility of the private sector. Any deviation from this combination might jeopardize the unlocking of development potential of Bangladesh, strategised in the plan documents.