Afghanistan: The Taliban factor and peace 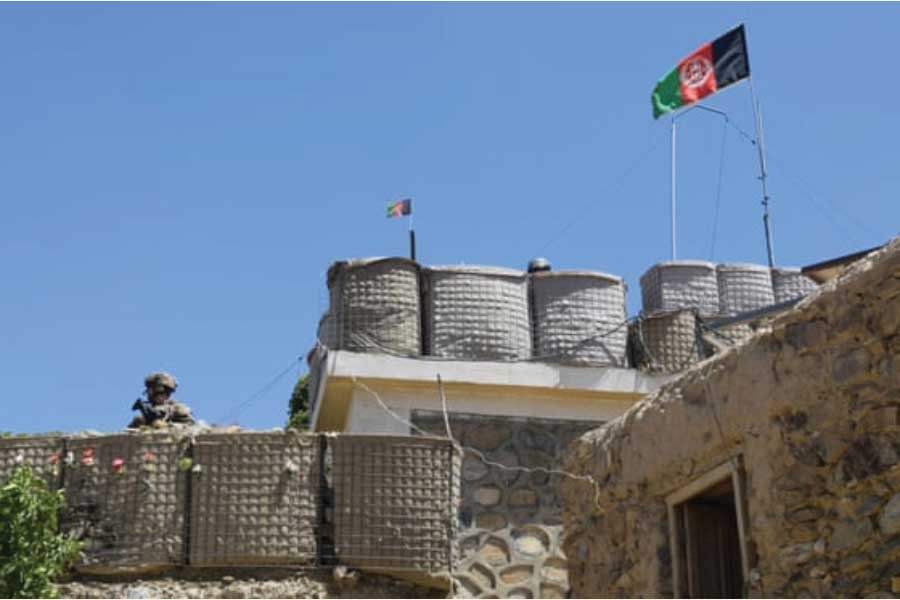 A US adviser stands at the fortification of a base during deployment to Afghanistan in June 2019. The collapse of protracted US-Taliban negotiations has triggered fears of a spike in violence. —Photo: Handout/Reuters

Instability and the search for peace in Afghanistan continue to attract attention of international geo-strategists. Anxiety has grown over the last year because of terrorist attacks carried out at regular intervals by terrorists belonging to the Taliban group as well as those associated with the IS (Islamic State). This concern has been further heightened with President Trump abruptly calling off peace talks with the Afghan Taliban just as it appeared that the insurgents and Washington were on the cusp of a deal.

It may be recalled that US President George W Bush ordered the US invasion of Afghanistan and initiated the first air strikes on  October 07, 2001 to overthrow the Taliban government in the autumn of 2001. This happened because the militants had given safe haven to the al-Qaeda network led by Osama Bin Laden to plan the attacks on the US on September 11, 2001 which killed 2,977 people in New York, Washington and Pennsylvania.

This time round, the US was hoping that matters would be brought to a successful compromise through a deal on the eighteenth anniversary of the 9/11 attacks, to be reached on  September 11, 2019 between the USA, the Afghan government and the Taliban after a meeting in Camp David, USA.

The changing dynamics after 2001 was interesting. One needs to trace the important aspects.

Within two months of the US and its international and Afghan allies launching their attacks, the Taliban regime collapsed and its fighters melted away into Pakistan. NATO (North Atlantic Treaty Organisation) and the USA initially thought the matter had been dealt with. However it was clear that such an assumption was wrong.

The US-backed Afghan government that took over in 2004, discovered to its surprise that the Taliban still had a lot of support in areas around the Pakistani border, and were generating hundreds of millions of US Dollars a year from illegal drug trade, mining and taxes imposed on transportation vehicles carrying goods  through their controlled territory. In fact, specialists on Afghanistan are now pointing out that the Taliban group could be making as much as US$ 1.5 billion a year from drugs. It may be noted that Afghanistan is the world's largest opium producer, and most opium poppies - used for heroin - are grown in Taliban-held areas. Opium poppy cultivation is carried out in 136,798 hectares in Helmand, in 23, 410 hectares in Kandahar and in over 484 hectares around Kabul. Such cultivation in smaller area dimensions also takes place in 11 other districts of Afghanistan. The Taliban are also making money through businesses like telecommunications, electricity and minerals. This has explained the questions that have often been asked as to how the Taliban has managed to remain so strong despite NATO efforts in general and the US in particular.

At the same time the Taliban has kept world attention on them as the alternative in Afghanistan through suicide attacks on not only members of the Afghan armed forces and foreign troops but also without hesitation on the civilian population in Afghanistan. These attacks have forced Afghan troops to struggle to counter the threat the re-energised group has posed within the country.

It also has to be mentioned here that since 2014, the bloodiest year in Afghanistan since 2001, NATO's international forces - wary of staying in Afghanistan indefinitely - have ended their combat mission, leaving it to the Afghan army to fight the Taliban. This has given the Taliban momentum, as they have seized territory and detonated bombs against government and civilian targets. Last year a survey indicated that the Taliban are openly active across 70 Per cent of Afghanistan.

It would be worthwhile to refer to some of the casualty figures that have surfaced in recent times about what is happening in Afghanistan. This is casting the shadow that has encouraged the USA to start negotiations with the Taliban. It's difficult to say how many Afghan troops have died over the last five years. The numbers are no longer published by the Afghan government. However, in January 2019, Afghan President Ashraf Ghani mentioned that 45,000 members of the security forces had been killed since 2014. This figure did not clarify how many civilians had also perished. Some civil society representatives have however told the media that more than 32,000 civilians had died. It may also be noted that nearly 3,500 members of the international coalition forces have died since the 2001 invasion - more than 2,300 of them American. 16 US troops have been killed in 2019. The Watson Institute at Brown University  estimates that 42,000 opposition fighters have died. The Taliban, despite all the armed efforts against them, now control much more territory than they did when international troops left Afghanistan in 2014.

The Watson Institute has mentioned that conflicts in Iraq, Syria, Afghanistan and Pakistan have cost the United States US$ 5.9 trillion since the US started operations in that region.

All these factors have directly and indirectly contributed to the United States initiating the dialogue with the Taliban in Qatar. This effort to reduce US troops numbers in Afghanistan has been influenced with the fact that the next US presidential election is coming up in November, 2020.  This emphasis on partial pull-out is also being focused on because there is a growing anxiety among Washington strategists that a full US troop pull-out would leave a vacuum that could be filled by militant groups seeking to plot attacks in the West. The Afghan people, meanwhile, will continue to bear the brunt of the long and bloody conflict.

Dawood Azami, who works as a Multi-Media Editor at the BBC World Service in London, has identified the following reasons for this evolving situation: (a) lack of political clarity since the invasion began in 2001, (b) questions about the effectiveness of the US strategy over the past 18 years, (c) the fact that each side is trying to break what has become a stalemate, (d) that the Taliban have been trying maximise their leverage during peace negotiations, and (e) the increase in violence by Islamic State (IS) militants in Afghanistan. This group has been behind some of the bloodiest attacks recently.

US President Donald Trump made his own effort consistent with his future electoral priorities but subsequently called off peace negotiations (for the moment) with the Taliban that sought to end America's 18-year war in Afghanistan. He planned to meet Afghan President Ashraf Ghani and senior Taliban leaders on September 08. He purportedly called off the programme after the militants admitted that they were behind the latest terrorist attack that killed 12 persons including a US soldier, a Romanian soldier working with NATO and 10 civilians. This was correctly seen as unacceptable by Trump.

The talks were due to take place a few days before the anniversary of 9/11. Consequently, any agreement reached on that data in Camp David would have greatly benefitted President Trump. In response, the Taliban have stated that Americans will "lose the most" for cancelling.

Interestingly, the office of Afghan President Ashraf Ghani, who would have met separately with Mr Trump at Camp David, has noted that real peace would only be possible when the Taliban agreed to a ceasefire and direct talks with the Afghan government.

It may be remembered that this US effort to come to an understanding with the Taliban in Doha, the capital of Qatar, was the result of nine rounds of talks between the representatives of the two sides. It also needs to be mentioned that nearly a year of painstaking negotiations took place but this had excluded any representation from the Afghan government in Kabul who are denounced by the Taliban as American puppets.

US negotiator Khalilzad had earlier indicated that based on the draft agreement, the US would pull out 5,400 US troops from five bases across Afghanistan within 135 days so long as the Taliban met conditions set out in the agreement. The US currently has about 14,000 service members in Afghanistan, alongside NATO troops, helping to train and advise Afghan troops and conducting counter-terrorism operations. In return, the Taliban would guarantee that Afghanistan would never again be used as a base for terrorism by them or their allies.

Taliban spokesperson Zabihullah Mujahid has pointed out that the talks were going well until September 07. He also said that the Taliban and the Afghan government had agreed to talks on 23 September after reaching an agreement with the USA. He has observed that "pulling out of the peace process before the signing of the agreement shows the US's lack of maturity and experience."

The latest act of violence only underlined fears that the US-Taliban agreement would not end the daily fighting in Afghanistan and its toll on civilians. One can only hope that in the coming days any commitment made by Taliban negotiators with the US or with the Afghan government will be upheld by Taliban commanders in the field. That is the crucial element within this paradigm.