Adapting to the way of life in Dhaka 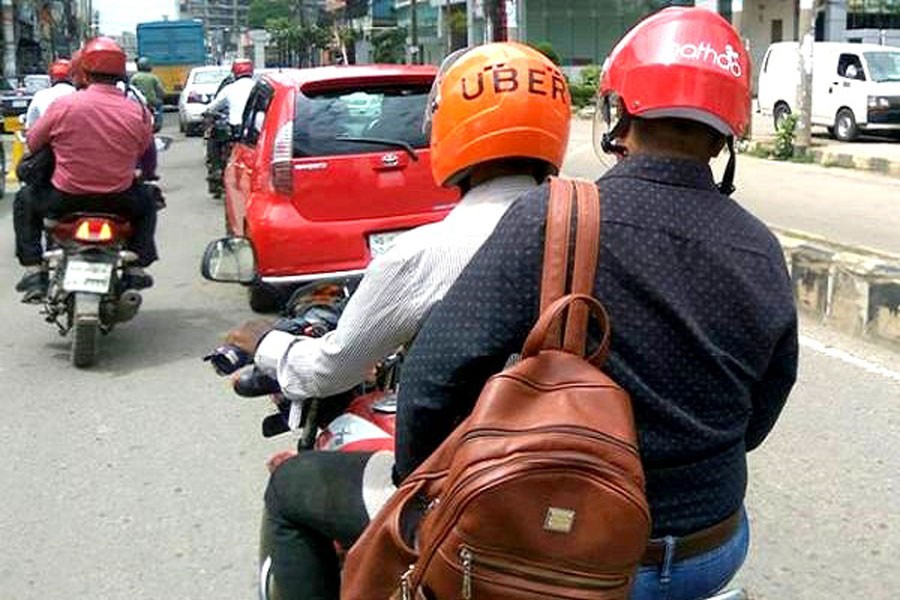 Before 2016, commuting was almost a nightmare in Dhaka. Getting on a public bus or other transports during peak hours was near to impossible. Chances of finding a CNG-driven scooter or a taxi that will go in the direction of the desired destination of a commuter were also very slim.

This scenario improved after ride-sharing services like Uber, Pathao, Shohoz, Obhai, SAM and many others initiated operations in the country since 2016. Commuters can now find a vehicle, motorcycle or a CNG-driven scooter through apps on their smart-phones that will take them to their destination without having to haggle with the fare and waste time on the streets looking for a transport.

PROBLEMS CAUSED BY SOME RIDE-SHARING SERVICES: Some contentious issues have already arisen in the cities of the country where ride-sharing services are operating.  For example, the number of accidents has seen a spike, according to urban transport experts. There are also complaints that most riders and drivers of ride-sharing services rampantly violate traffic rules and regulations.

With a motive to make more trips, they tend to speed leading to traffic violations and often accidents. Some drivers of ride-sharing services are also not providing their correct information, making such services unsafe for passengers.

On April 25, Uber moto passenger Fahmida Haque Labannya, a 3rd year computer science and engineering student of BRAC University, died on the spot after a covered van hit the Uber motorcycle from behind. The incident occurred near the gate of National Institute of Cardiovascular Diseases in Dhaka.

Three days later, at a press conference, the Dhaka Metropolitan Police blamed reckless driving of both the drivers for the fatal accident. The DMP alleged that Uber did not assist them instantly to locate the rider who provided fake address and information to the company. Later, the police arrested the driver of the covered van and the rider of the motorbike.

There are complaints that some motorcycle riders of ride-sharing services do not provide proper helmets to their pillion passengers. They rather provide helmets which are identical to work helmets used by construction workers. This raises the question of safety of passengers. Most of these riders do not have proper helmets for passengers as these are costly.

On July 4, 2018, Mohammad Nazmul Hasan Fuad, who was riding pillion on a Pathao bike, was killed and the rider was injured when a Bangladesh Road Transport Corporation bus hit their motorcycle on airport road in Dhaka. Nazmul was not wearing any helmet during the incident.

Additionally, rising number of complaints and queries about ride-sharing services has led to the formation of several groups on Facebook. The members of these groups share helpful information with users or passengers of ride-sharing vehicles, who were charged high fares, asked for tips or faced other irregularities through the ride-sharing apps and their drivers.

Since 2016, there were a few reported incidents of harassment of passengers by drivers and riders of ride-sharing services. While most of the ride-sharing services are quite responsive at taking actions against unruly riders and drivers, there is a concern that some bikers and drivers do not provide correct information about their address, licence, documents of the vehicle etc. This leaves a window open for a biker or driver to join a ride-sharing service just to commit crimes. A rape incident of a woman by an Uber driver in India in 2014 led to such concerns.

Such incidents drove Uber and a few other companies to issue 'warnings' on their apps that users should match the registration number of the car and the identity of the driver with the information in the app before embarking on a trip.

Additionally, some of the start-up companies are reportedly engaging in steps which can be considered illegal.

For example, in November 2018, there were allegations that Pathao has been illegally gathering data of its users. Last month, Pathao sacked around 250-300 of its senior and mid-level employees without allegedly paying proper compensation packages according to the labour law of the country.

The intensification of traffic congestion in Dhaka, Chattogram and other cities is also partially blamed on the rising number of ride-sharing vehicles.

Proper implementation of the 'Ride-sharing Service Guideline' will undoubtedly increase the potential of the ride-sharing service sector, helping it become an integral part of the urban transport system. According to the guideline, the sector will come under the Bangladesh Road Transport Authority (BRTA), a government body that will ensure that these companies are following the rules and regulations.

The first step of the guideline is likely to materialise from this month when the ride-sharing service providing companies are scheduled to register with the Bangladesh Road Transport Authority (BRTA).

THE GUIDELINE: The 'Ride-sharing Service Guideline, 2017' can address all of the issues mentioned and more. The guideline was approved by the cabinet on January 15, 2018. It came into effect on March 08, 2018.

The companies should be registered with the BRTA in order to receive a certificate to operate as such a company.

Once these companies register with the BRTA they will have to follow all the laws that are abided by all private and public companies in the country. That means they would also pay taxes and VAT as ordained by the BRTA.

Once a ride-sharing company gets its 'enlistment certificate', it would need to sign Memorandum of Understandings (MoUs) with vehicle owners and their drivers. This document will clearly mention the responsibilities of each stakeholder. The guideline has mentioned that, at all times, the drivers and riders would need to abide by the traffic rules and regulations.

The enlistment certificate for companies will have a validity of a year. Application for renewal must be made three months before expiry of the certificate. The fees for the certificate and the renewal have been clearly mentioned in the guideline.

The guideline mentions that all documents of a vehicle in this sector would need to have updated documents before plying on the roads. The vehicles should have designated stands, so that they cannot create traffic congestion by parking illegally on the roads.

Only personal vehicles can be enlisted with ride-sharing companies. The vehicle or motorcycle owners who are willing to be a part of the ride-sharing service sector would also be certified by the BRTA after they register with them.

The guideline also states that all documents related to drivers and owners of vehicles to be used in the sector should be verified and then kept by a ride-sharing company.

The guideline also limits the number of vehicles that an owner can have in the sector to just one. All ride-sharing vehicles will be listed in the BRTA's web portal under specific categories. Also, passengers should be able to complain.

These clauses will ensure that commercial vehicles are not entering this sector. Also, there will be more accountability.

According to the guideline, any personalised vehicle or motor-cycle that has been purchased less than a year ago cannot be registered with an app-based ride-sharing service. Furthermore, the guideline also restricts the provision of ridesharing services with a vehicle owned by another person or organisation.

Failure to follow any of these rules can lead to cancellation or suspension of the company's enlistment certificate.

To ensure safety and security of the passengers, the guideline has also instructed ride-sharing service providers to place an SOS button on their apps. Users or passengers should also be able to seek help through the 999 national helpline as well.

Among other things, the police needs to be provided access to the ride-sharing service companies' servers so that they can observe any trip from the police control room. Additionally, provisions need to be made so that a passenger can alert the police in case of any untoward incidents.

Till date, some ride-sharing service companies have made some progress in some of these areas mentioned. Others are lagging behind.

According to BRTA information reported by the media at various times, the 16 ride-sharing companies operating in the country has over 104,000 motorcycles, 18,000 cars and other kinds of transports registered with them. But BRTA is certain that these numbers are much higher.  The BRTA has alleged that they are yet to get proper information regarding these from the ride-sharing service providing companies.

While the companies will come under the monitoring of the BRTA following registration, the safety and security features mentioned in the guideline may take longer due to delays from the Police, Election Commission and the road transport authority.

GLOBAL BEST PRACTICES: It is very important that all the different stakeholders of the ride-sharing service sector come together and dedicate their efforts to implement the guideline.

The guideline can be updated on a regular basis, as is done in other countries of the world.

For example, India considers the ride-sharing or carpooling sector as an integral part of its transport sector. While ensuring better mobility of commuters, the sector has been an important source of income for some people. The government of India also considers the interest of taxi companies. In Bangladesh, CNG-driven scooters and taxi companies have been suffering ever since ride-sharing services became popular.

Around the end of 2016, India set rules for the ride-sharing service providing companies like Uber and Ola. After a committee of the Ministry of Road, Transport, and Highways reviewed issues related to taxi permits, they recommended that the aggregators should be allowed surge or dynamic pricing within a certain range to match supply and demand.

"Maximum tariff may be allowed up to four times that of minimum tariff from 12:00am to 05:00am in morning," the committee ruled, adding that a "very high degree of variation in pricing should not be permitted as it may lead to exploitation of consumers in the time of crisis."

At the same time, the same committee also recommended that motorbikes be allowed "two-wheeler taxi permit on the lines similar to those for city taxi." These rules are still being followed in India.

Last year, a high-level taskforce, including representatives of various ministries of India, were juggling with the various models related to ride-sharing being used around the world. They were trying to figure out which model would be right for allowing private car owners to use their cars in the ride-sharing service sector while not affecting the taxi companies.

They narrowed their search down to the Singapore model-under which a private car owner can provide two shared rides a day. There was also the US model where there is a cap on the money a car owner can make in a year through carpooling services.

Earlier this year in the United Kingdom, the Ministry of Transport laid out national minimum standards for taxis and ride-sharing vehicles. These standards include the rule that such vehicles should have in-vehicle video recording. This can ensure safety and security of the passenger and the driver. Also, footage from the video can be used to take legal steps if needed.

The standards also included a policy towards drivers who have previous criminal records, has recommended a limit for licences of ride-sharing companies, mandatory training for drivers on disability, equalities and identifying signs of exploitation or abuse of children and vulnerable adults.

All of these steps along with others can be considered by the BRTA and the related government departments to ensure that the ride-sharing service sector can contribute positively to the public transport sector of the country.