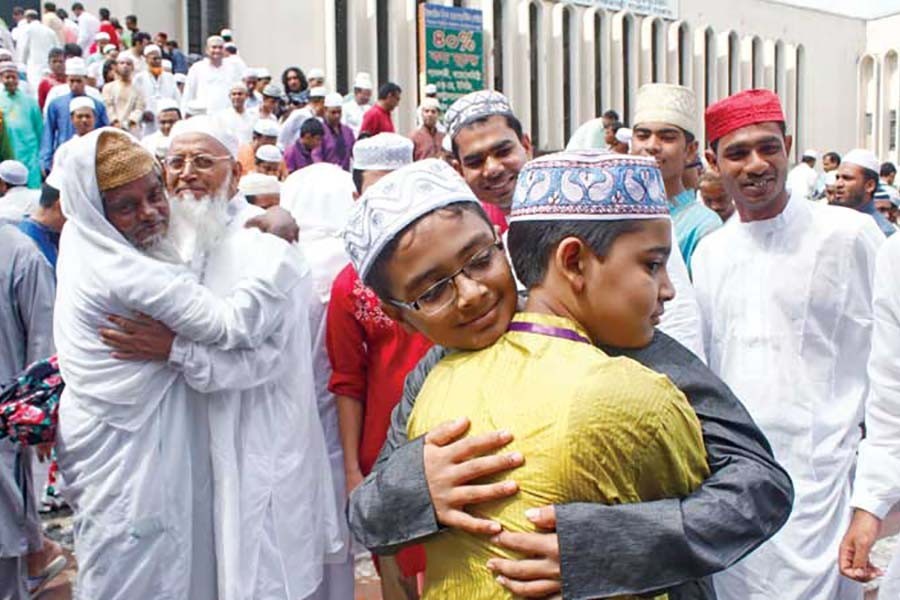 There are large numbers of people residing in Dhaka for decades who do not miss a single opportunity to visit their ancestral homes in villages. The ideal occasions for these trips appear before them during the relatively long vacations and work-free times. It's natural that during Eid holidays people are overtaken by nostalgic feelings that make them inpatient to visit their childhood or youth-time abodes. The attraction is not confined to certain landscapes and just homesteads. A major part of these trips is meeting people close to heart --- generally known as near and dear ones. Even old friends, a lovable tramp or an octogenarian lonely lady may also fall within the ambit of these people. In Bangladesh, this ineffable bond with native villages has for ages been seen being viscerally distinctive like in many other countries in the sub-continent. In today's Bangladesh, a vivid spectacle rich with the passion for rushing to ancestral rural homes is evoked during the two Eids. Those who cannot manage time and opportunity to travel home in other times do not fail to seize upon the tension-free, leisurely Eid holidays. Many infrequent holiday-makers also join them. The trend of visiting tourist spots during long Eid vacations has yet to become widely popular in this country.

A pertinent question arises at this point. Why do many city-based urban people feel bound to make Eid home trips even upon going through scores of travel-related hassles? The answer, however, is simple. Few people can severe their ties to their roots of origin for good. Owing to lots of mundane reasons, the rural connections might loosen; but except those growing an aversion for ancestral homes for personal reasons people in this country hardly close their chapter on their roots. Barring the highly industrialised countries, where the concept of permanent home addresses is different from that of undeveloped nations, people in the tradition-bound countries take pride in having a permanent address and residence, especially somewhere outside their temporary urban residences. In most cases, it is the place where their forefathers have lived; and where their close relatives have been living for generations. Thanks to their different socio-familial structures, people in many developed countries call an address permanent, where they stay for a long time. They can call the address permanent, but the place doesn't necessarily represent their roots.

Getting back to their roots during great festivals is a feature that especially makes the sub-continent stand out. Irrespective of cultural differences in the region, and fast urbanisation of some countries, the sub-continent is still passionately stuck to the value of honouring the roots. In the distant past, it was the Bengalee Hindu communities in the main who would rush to remote villages to spend the days-long Durga  Puja vacation. In those pre-Partition days, Kolkata was the largest city in undivided Bengal. Most of the educated and affluent people would work at offices and engage in business in this city. They belonged to the class of 'city Babus'. Upon their arrival in their ancestral homes, villages would become athrob with myriad types of cultural activities. The main reason for travelling to remote villages was to seek blessings of the elderly relatives and spend time in festivities along with them. But helping revive Bengal's cultural traditions and promoting newer modes of festivities also emerged as a great fun on their part.

The journeys en masse to village homes during Eid vacations picked up in the 1940s. Like seen at the time of Puja festivals, the Eid-time villages in erstwhile East Pakistan, now independent Bangladesh, used to be the venues of great celebrations, exchange of greetings and seeking blessings of the elderly near and dear ones. Cultural and sports events organised by the 'guests' from cities would also be an integral segment of the Eid festivities. In fact, it is unalloyed joy and the warmth of fellow feeling that continues to add to the jovialities of Eid.

With the ever increasing exodus of job-seeking youths to the country's cities, and many others stopping Eid visits to villages to avoid travel ordeals, there has, nonetheless, been little decline in the number of festive makers in rural areas. Many city residents cannot resist the pull of villages finally.  Given the frenzied rush to ancestral homes --- alone or with family members, increasing by the year, the village-based Eid celebrations show few signs of losing their shine. A little digressive though it may sound, many at this point might feel like to refer to the mass exodus to villages from Dhaka in 1971. After the start of the genocide on 25th March, the panic-stricken and baffled city residents found the only option open before them was taking shelter in villages. It was like submission to their roots.

Perhaps the world's largest temporary migration to village and small-town homes from big cities occurs during the Chinese Lunar Year Spring Festival. During the days-long celebration of the festival, millions of city-based Chinese embark on long train and plane journeys to the rural and semi-urban areas to celebrate the festival with their parents and other relatives. This journey has been recognised as the largest festival migration in the modern times.

To speak in brief, it is the people in countries in the Orient who greatly value the ties to their rural past. To them, the village-based ancestral homes represent their roots. During happy occasions, crises or simple emotional outpouring, the ever-living roots appear before them as the only place where they can turn to. Bangladesh definitely is one of them.