A marriage with a difference 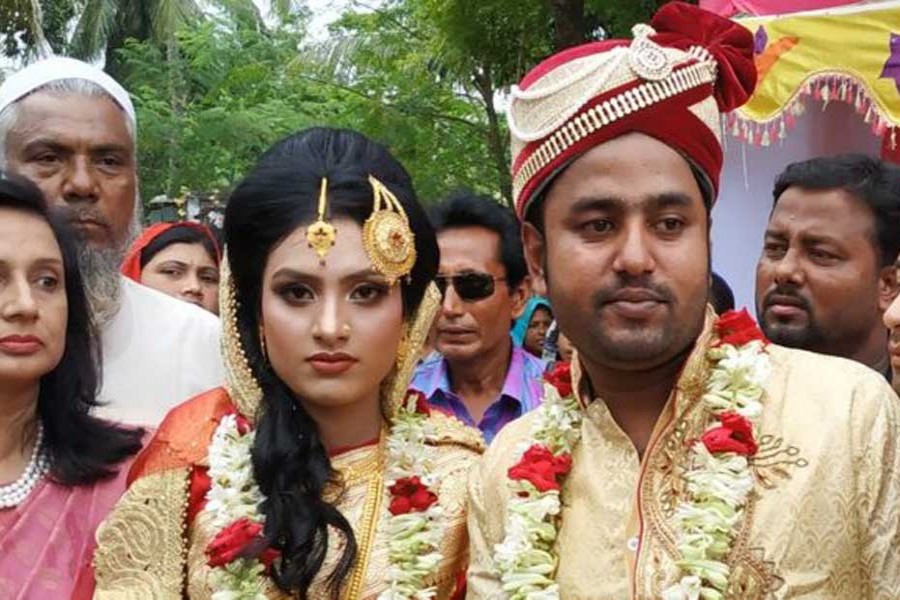 In this age of social media, there is an overpowering drive among people to be under the spotlight. So people look for ways and means that would set them apart from the rest of society. Surely they are after accomplishing feats -no matter if those are trivial, ludicrous and even bizarre. The technological advantages of reaching a wider audience has made people crazy and hysterical to do what they consider 'novel' and be in the news. Some of those hollow and cheap feats are even recognised by some agencies globally. Whether those add value to human quality or change society positively is hardly anyone's concern.

It is against such a social backdrop, the recent marriage solemnised in a unique way at Meherpur calls for an objective analysis. In the country's known history never has a bride led procession to the groom's house to marry her life partner before this landmark event. Here the girl had the courage to think out of the box and even spell it out. A farmer, her father was progressive enough to reason positively. Her would-be father-in-law, doing politics of a socialist brand, welcomed the extraordinary proposal with open arms, although other members of both families and their neighbours and relatives considered it odd and opposed the matter initially. Sure enough, the groom's inquisitiveness to meet the girl was fuelled by this unheard-of proposal. On making an acquaintance of her, he was convinced that the break of traditional groom procession to bride's place will give a most positive message to society struggling to save women from widespread gender repression and sexual abuse.

No, this unique celebration of marriage in the groom's place does not rival Begum Rokeya's feminist utopia as depicted in her novel, Sultana's Dream; but what it does instead is reinforce the belief that women can really have their way and prove themselves. In the novel the science fiction-esque electrical technology makes possible agriculture without manual labour and even flying cars pioneered by women. They also harness solar energy and control weather -ideas that have greater relevance today in the context of climate change.

The recently married couple may not have matched Begum Rokeya's vision and feminist outlook in scope and range but to reverse an age-old tradition and custom they and their families had to make a giant leap. There is no way undermining this pioneering step -one that can help society overcome the stereotype. The girl's mental makeup is particularly laudable -all the more because she had the boldness to make her intention clear at no other place but in a rural setting.

This surely should not be considered yet another way of drawing public attention and be famous. She has stuck to her long-held belief that if grooms can lead a marriage procession to the bride's house, a bride also should enjoy a similar privilege. At times insolvent families of brides face quite a challenge to appease the guests accompanying grooms. In such cases, the reversal of the system can be of help.

Perhaps, some tribal communities in India followed this practice way back in order to make things easier for girls to adapt to their in-laws' houses. One such community in India is Patidar that long practised this tradition. But no longer. However a 25-year law student dressed in her bridal finery rode on a horseback to marry at her groom's house in 2013. This too was widely appreciated because the move was considered to empower women. Recognition of women's value in society is what comes to the fore through such initiatives. So, let the examples be followed in its true spirit to fight many social ills.