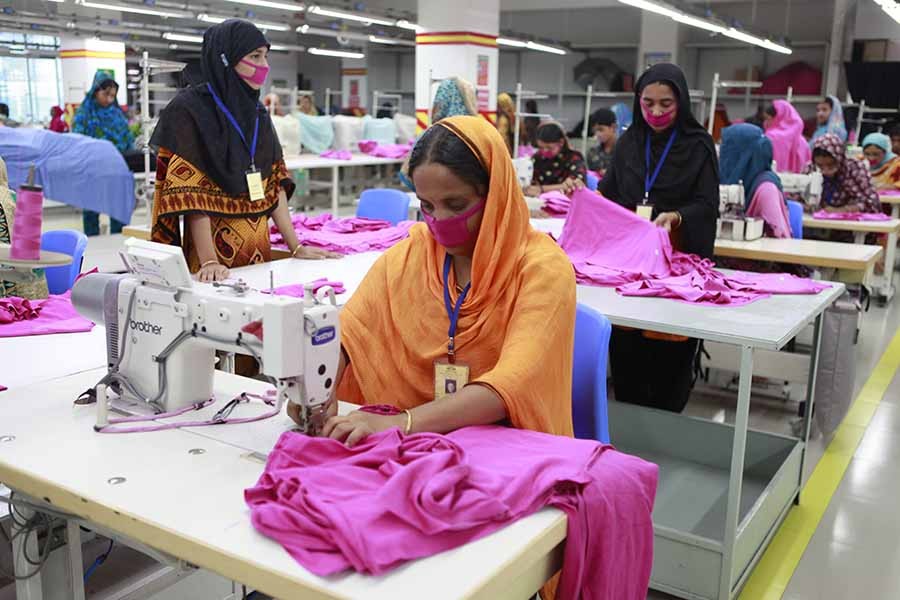 Clothing is piling up at warehouses in Bangladesh as consumers tighten belts in the United States (US), Europe, and other big markets, according to a report published in the Financial Times (FT).

Quoting the clothing manufacturers, the FT report also said that  orders in the world’s largest ready-made garment (RMG) exporter after China had been slowing since July due to the war in Ukraine and sanctions on Russia, and their impact on inflation, interest rates, and mortgages across the world.

"Everything has gone up, so the clothing budget has squeezed," Faruque Hassan, president of the Bangladesh Garment Manufacturers and Exporters Association (BGMEA), told the Financial Times. "That’s why some of the brands, some of the importers have slowed down their orders."

Hassan also added that some retailers had asked Bangladeshi suppliers to stop making garments or to delay shipments for up to three months.

"That is having a huge impact because all our factories . . . have bought fabric to produce the garments, and now they are having a serious crisis," he continued in the report released by FT today.

John Reed, the FT’s South Asia bureau chief, filed the report from Dhaka where he mentioned that the downturn in global clothing demand comes as Sheikh Hasina Wazed’s Bangladeshi government, which faces an election next year, contends with higher prices for imported gas, leading to power cuts that have hit some garment producers.

The report also added that the opposition Bangladesh Nationalist Party (BNP) has staged large rallies in recent weeks in a bid to capitalise on discontent with a weakening economy ahead of the poll.

The FT report further mentioned that Bangladesh turned to the International Monetary Fund (IMF) this month for assistance, and secured a US$2.3 billion credit facility and another US$1.3 billion from its Resilience and Sustainability Facility, meant to help poorer countries address climate change and other long-term challenges.

"Unlike its regional neighbours Sri Lanka and Pakistan, Bangladesh has not faced a full-blown liquidity crisis. But its foreign exchange reserves have fallen this year against the backdrop of a strengthening dollar and pressures on prices and consumer demand," wrote John Reed in the report.

"Clothing and textile production is by far the biggest industry in Bangladesh, which profited from surging sales when Covid-19 lockdowns eased and consumers indulged in `revenge buying’", he added.

Quoting the statistics available with the BGMEA, the FT report mentioned that Bangladesh exported garments worth $42.6 billion and textiles worth $2.6 billion in the 12 months to the end of June, accounting for about 85 per cent of total exports.

"Making clothes for Walmart, Primark, H&M, Target, and other global chains is a cornerstone industry that has helped lift more than 160 billion people, primarily women, out of poverty," it added.

The report also quoted Ranjan Mahtani, chief executive of Epic Group, which has a factory in Bangladesh and a large business in the US, who said that clothing sales "really spiked post-Covid because there were so many stimulus cheques", but were now falling again, leading to "huge" inventories at retailers.

In the first months of the pandemic, Bangladesh’s garment makers were hit hard when many retailers cancelled orders, said the FT report. Some responded by pivoting to making masks and personal protective equipment as demand for those products climbed rapidly.

"In a country that looks chaotic from the outside, everybody was really focused," says Vidiya Amrit Khan, director of the family controlled Desh Garments, while speaking to FT. The unit supplies brands including Calvin Klein and Tommy Hilfiger in the US, and Crew Clothing in the UK.

The BGMEA president told FT that in the latest slowdown, retailers were not cancelling orders outright. Instead, they were asking for discounts or factoring warehouse charges into what they paid manufacturers whose clothing they could not sell immediately.

He further added that the industry had asked the Bangladesh Bank, the country’s central bank, to press lenders to defer suppliers’ loan payments so that factories could give priority to paying wages and utility bills.

Power cuts have caused further problems at manufacturers. In this connection, Syed Naved Husain, chief executive of Beximco, told FT: "Energy is a problem and because of that, a very large section of the industry is going through terrible months.

Husain also said that he thought the industry should "buy energy at the cost it’s available", even if it meant the cost of a garment shot up.

In a fiercely competitive industry with thin margins, clothing producers in Bangladesh are especially vulnerable to changes in global consumer tastes and demand, observed FT report.

As clothing chains respond to pressure from shoppers and shareholders to improve their sustainability practices, garment-makers have invested in machinery and equipment aimed at reducing the use of water, power and other resources.

"What’s happening now is that fashion is under attack," said Husain, whose company has installed solar panels, new denim washing machines, and other equipment.

Tipu Munshi, Bangladesh’s commerce minister, confirmed the slowdown in clothing exports, but noted that people would "still have to wear garments", even during leaner economic times.

"Maybe you buy two out of four [garments], but you still have to buy it," he told FT. "And no one can beat our price."