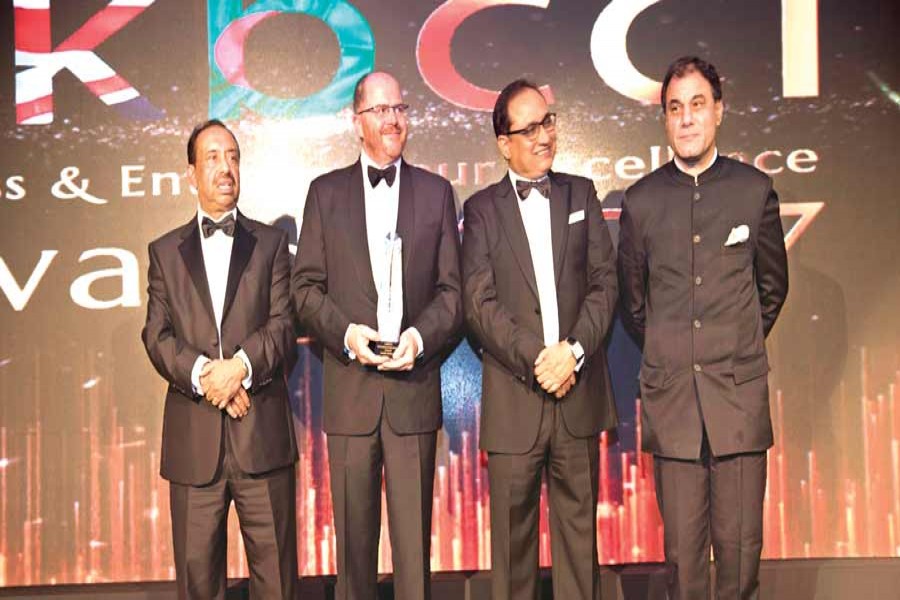 The UKBCCI Business and Entrepreneur Excellence Awards-giving ceremony was held at London Hilton at Park Lane in London recently.

Chairman and CEO of Transcom Group Latifur Rahman has been given the UKBCCI Lifetime Achievement Award for his outstanding contribution in industrial development.

The prize giving ceremony of the UKBCCI Business and Entrepreneur Excellence Awards-2017 was held at London Hilton at Park Lane recently.

Awards were given to British Bangladeshi Business Entrepreneurs for their individual excellence in 12 different categories, according to a statement.

In his speech, Bajloor Rashid termed the award giving ceremony a bridge and communication media between the business communities of the United Kingdom and Bangladesh.

He said, "We have written our success story in the catering sector of British economy, but our success in the other sectors are mostly kept ignored and unrecognised even though they bear the mark of talent and excellence."

"To uphold and recognise these talents at an international scale is actually the drive behind this initiative," he added.

Speaking on the occasion, Chairman of UKBCCI Iqbal Ahmed, OBE, said: "We are committed to build up a bridge between Bangladesh and the UK besides creating opportunities for the community, especially the new generation."

Calling for transfer of the Visa centre from Delhi to Dhaka, he said, statistics show that percentage of visa approval reduced by 70 per cent recently.

This is great loss not only to the visa applicants but also to the growth of British economy, he added.

George Freeman, Chair of the Policy Board of the British Government attended the programme as the chief guest.

He said: "We need more and more businessmen for the expansion of our economy and there is no alternative for the entrepreneurs."

Mentioning the post-Brexit policy of the government he said, it is seriously considering the opinion of the 52 per cent voters that opined on getting out of the European Community. Naturally, the British government is always keen on developing and maintaining a healthy relation with Bangladesh, he added.

Businessmen and entrepreneurs were given awards in 12 different categories this year. Latifur Rahman was honoured with the UKBCCI Lifetime Achievement Award for his outstanding contribution in the industry.

"As a Bangladeshi, I feel proud looking at the success of my fellow countrymen in the UK," he said.

Mentioning Bangladesh as a foreign investment friendly country, he called upon the young entrepreneurs of Britain to engage in deeper collaboration with the Bangladeshi business community.

In addition, UKBCCI Special Recognition Award was given to Rushnara Ali, the first Bangladeshi-born British MP, and Directors' Choice Award to Ruqsana Begum, the Muai Thai Kick Boxing champion, along with other recognitions including Young Entrepreneur of the Year and Inspirational Business Leader of the Year.