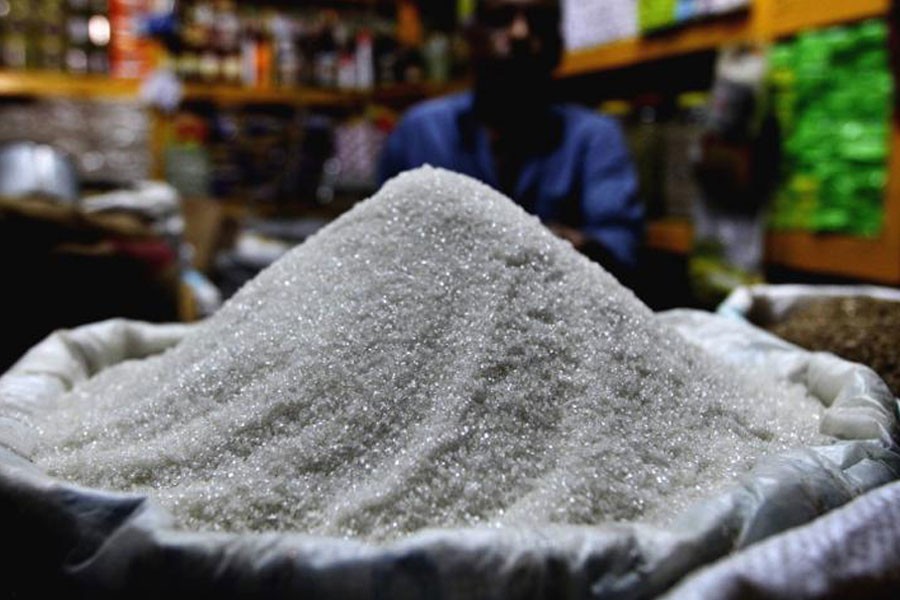 Sugar prices remained mu-ch higher at Tk 115 to 120 a kg last week despite the government having approved a hike in its official prices as per proposals of the private refiners.

But the essential was still retailing at Tk 12-13 a kg higher in the groceries and markets, according to insiders.

Prices of vegetable showed a slight decline but not to the expected level of the consumers while palm oil prices showed a notable hike during the period, according to consumers and trading sources.

Golam Ali, a grocer at Katasur in Mohammadpur, told the FE they could not source sugar despite requesting nearby dealers for a month.

He said wholesale price is minimum Tk 108 a kg which discouraged many traders to source the item.

Visiting a few more shops in Mohammadpur and Rayerbazar , the FE found most of the groceries were still going out of sugar forcing consumers to buy the item from distant kitchen markets.

Kamran Hossain, a resident of East Rayer Bazar, told the FE that he sourced the item from a big grocery at Sankar Mor at Tk120 after failing to get it from his nearby shops.

"No shop has packet sugar as dealers have totally stopped supplying the item,", Mahatab Ali, a grocer at Joint Quarter in Mohammadpur, said.

However, the Directorate of National Consumers Right Protection last month identified seven reasons behind the price hike and shortage of sugar including gas crisis and complications in opening LCs with banks.

The mill owners, dealers and wholesalers were also getting an opportunity to make unethical profits as they sold the item at more than the prices fixed by the government as the price was not mentioned in the sales' invoices, according to DNCRP report.

The directorate also made an 11-point recommendation to make the market stable.

According to the directorate , there were 0.375million tonnes of sugar in stock and there was no shortage of raw sugar. The directorate officials conducted 103 drives across the country and fined 278 traders Tk 1.47 million in October.

Meanwhile, the vegetable prices showed Tk 5.0-10 a kg, according to different kitchen markets.

Newly-arrived onion plants were selling at Tk 55-65 a kg.

The government fixed maximum retail price of palm oil at Tk 125 a litre but price of the item has increased to maximum Tk 155 a litre in the kitchen market, according to trading sources.

The Trading Corporation of Bangladesh data showed a 13 per cent hike in palm oil price in a week.

Meanwhile, rice prices maintained the previous highs as coarse rice was selling at Tk 55-56, medium at Tk 62-65 and finer at Tk 75-98 a kg during this peak Aman harvesting season.

He said, "A little amount of fine has become only punishment for a billion dollar company."

He urged the government to take strict action against the market manipulators to give common people some sort of reliefs.