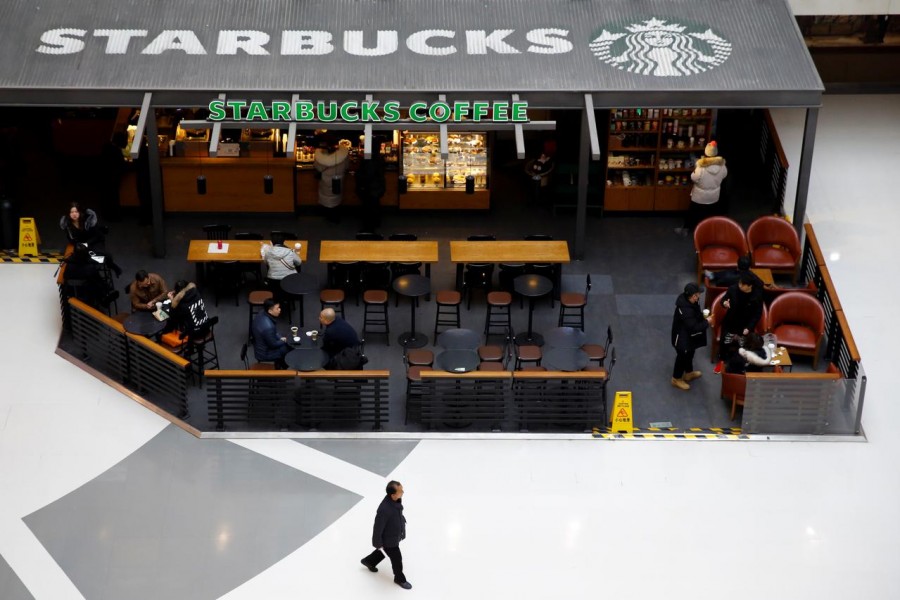 Starbucks Corp on Tuesday became the first major US company to warn of a financial hit from the new coronavirus outbreak in China, as it closed thousands of restaurants and adjusted operating hours in its biggest growth market.

The world’s largest coffee chain delayed a planned update - based on strong quarterly earnings results - to its 2020 financial forecast because of the outbreak, which has caused over 100 deaths and over 4,000 confirmed cases in China.

Shares of the company, which operates 4,292 stores in China, fell 1 per cent in extended trading.

The company, which beat sales estimates during its first quarter, “intended to raise certain aspects of our full-year financial outlook for fiscal 2020,” Chief Executive Officer Kevin Johnson said during the earnings call.

But because of the coronavirus outbreak, it decided not to revise guidance on Tuesday, reports Reuters.

The company expects the financial impact to be material but temporary, and it will depend on the number of stores it has to close and for how long. Currently about half of its stores are shuttered in China, which makes up about 10 per cent of global revenue.

It will not know until March at the earliest what the financial impact will be, but its long-term double-digit growth expectations are intact, executives said.

The virus, which originated in the Chinese city of Wuhan, has spread across the world and prompted companies to close stores and restrict travel to and from the country.

Starbucks is responding to the virus “in a thoughtful and responsible way to protect our partners and support health officials and the government as they work to contain this public health risk,” Johnson said. “I am proud of how Starbucks China is navigating a very dynamic situation.”

The Seattle-based company beat first-quarter estimates for same-restaurant sales, growing 5 per cent compared with expectations for a 4.4 per cent increase, according to IBES data from Refinitiv.

Sales at restaurants open for at least 13 months rose 3 per cent in China, where it will continue to concentrate on personalised beverages and its digital push rather than adopt a strategy of offering cheaper drinks like its rivals have used to gain market shares, Johnson said.

Overall, the company has been boosting its cold brew options, adding online ordering options and updating its loyalty rewards programme.

It also plans to add a breakfast sandwich with a plant-based patty in the United States and Canada this year.

Excluding one-time items, the company earned 79 cents per share, above estimates of 76 cents.

Revenues grew 9 per cent in the quarter in the United States, where it added 1.4 million customers to its 90-day active Starbucks Rewards membership, ending the quarter with 18.9 million active members, a 16 per cent increase over prior year.