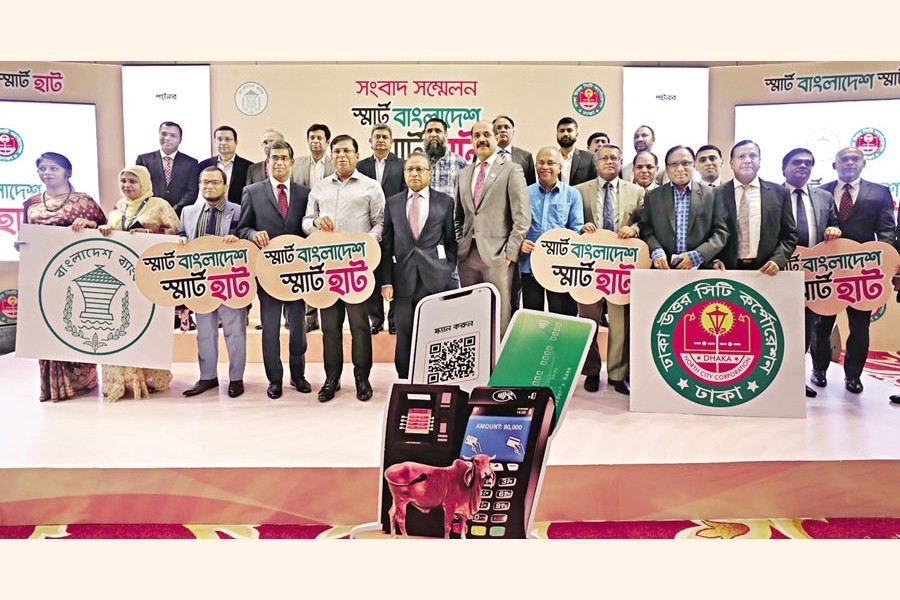 Dhaka North City Corporation (DNCC) has initiated to install digital payment booths at cattle markets with an eye to promoting digital transaction ahead of Eid-ul-Azha.

Officials concerned on Wednesday disclosed that the 'Smart Bangladesh, Smart Haat' project would initially be piloted at six cattle markets in DNCC area.

LGRD and cooperatives minister Md Tajul Islam and DNCC mayor Atiqul Islam jointly inaugurated the project, undertaken by the Bangladesh Bank and the DNCC, at a city hotel.

Addressing the programme, Mr Tajul says although the digital payment system will be available on a small scale at the start, the service will be phased in other cattle markets.

The initiative will make transaction safe for both buyers and cattle traders during the Eid rush, he adds.

Mr Atiq says, "Initially, we're introducing digital payment booths at six cattle markets under DNCC and we hope to cover all the cattle markets from next year."

The payment booths will remain open from July 01-12 at the designated markets.

According to the BB official, payment partners of the project are MasterCard, Visa and American Express while bKash and mCash are mobile financial service providers.

One booth will be placed at each market where buyers can pay the price of sacrificial animals through credit or debit card through POS, MFS and agent banking.

Meanwhile, the BB in a circular the same day instructed all scheduled banks to take to install booths in all cattle markets in the country to count money and detect counterfeit notes.