Rise in call points to pickup in economic activities 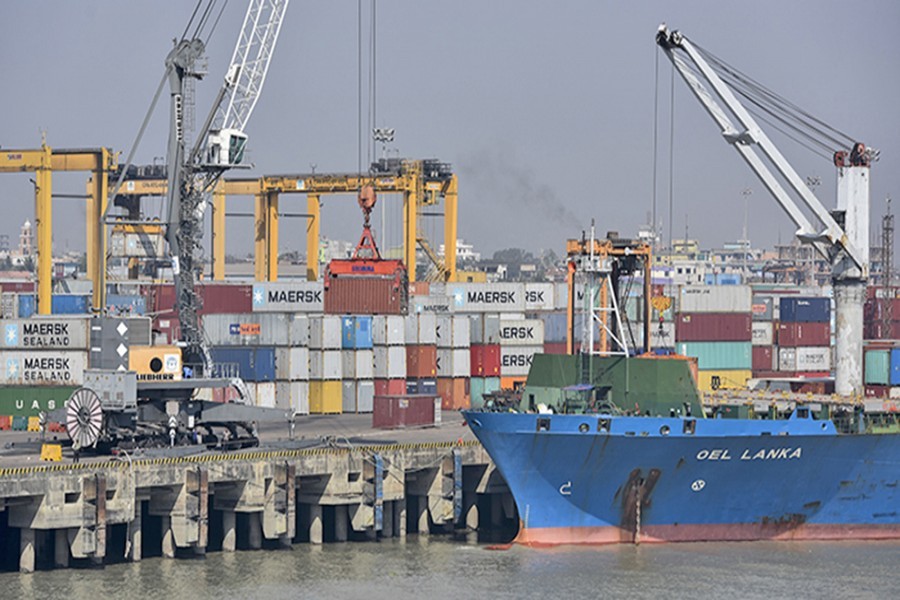 Containers being unloaded from a freighter at Chittagong Port — file photo

The ocean-going ships' call at the Chattogram port recorded a notable rise in July last, indicating a pickup in the country's economic activities.

The economy had slowed down to a large degree following the outbreak of Covid-19, starting from the second week of March last.

In July this year, the container-carrying ships made some 104 calls- up by more than 70 per cent from the lowest number recorded in April, according to MLOs and Ctg port sources.

A total of 104 ships called in July this year compared to 100 ships in July last year.

The ships mostly sailing from Singapore made 61 calls in April, the lowest number at least in six years, as the container traffic was much lower.

There are mainly two routes used by the shipping firms - Chattogram-Singapore and Chattogram-Colombo - to carry Bangladesh's export and import goods. Then, the cargoes are loaded on the larger vessels heading towards European or American destinations.

The Ctg port, the world's 64th busiest port, handles more than 90 per cent goods of the country's external trade worth over $100 billion.

However, in May 2020, there were only 88 calls by the container vessels to discharge the goods.

The calls started falling from April this year as the economic activities came to almost total halt from March 26 when the government had announced general holiday as a strategy to prevent the spread of coronavirus in the country.

Top shipping executives told the FE that the ships' calls at the port were increasing after the worst period witnessed in April last.

"This (call) means that both exports and imports are increasing, especially the clothing exports are reviving fast," said Captain AS Chowdhury, country chief of Sea Consortium, a Singapore-based feeder service.

He said: "We're expecting the number of calls to increase further from the next week after Eid holidays."

Clothing shipment, which was recorded at US$ 2.7 billion in June last reflecting a slight decline from that of the corresponding period of a year earlier, rose to $3.24 billion in July, 2020, according to the Export Promotion Bureau of Bangladesh.

Mr Ahmed, however, said the ships carried 72,000 TEUs (20-foot equivalent units) of export containers in July this year, which is 9,000 TEUs more than that of July last year.

"I think, shipment is ok so far, but the import volume remains a concern as it is yet to be satisfactory," said Mr Ahmed, who manages two vessels on Ctg-Colombo route.

He said the ships carried 102,000 TEUs of import containers in July this year against 113,000 TEUs in July last year.

Mr Ahmed said: "We're not worried about the exports up to September next as the clothing makers have assured us of orders for the period."

However, there are around 12-13 big main line operators (MLOs) engaged in transportation of Bangladesh's goods, while around 12 feeder services also carry goods to and from Bangladesh.

The global shipping leader, Maersk Line, has around 19 vessels on the routes, followed by Sea Consortium with 14 vessels.

The container ships having an average of 180-metre length and 9.5-metre draught annually carry more than 3.0 million TEUs of containers for the country.

Some ships even carry 2,200 TEUs of containers at a time although the medium-sized ones carry 1,500TEUs.

The MLOs and the feeder lines increase the number of vessels on the routes based on the demand.