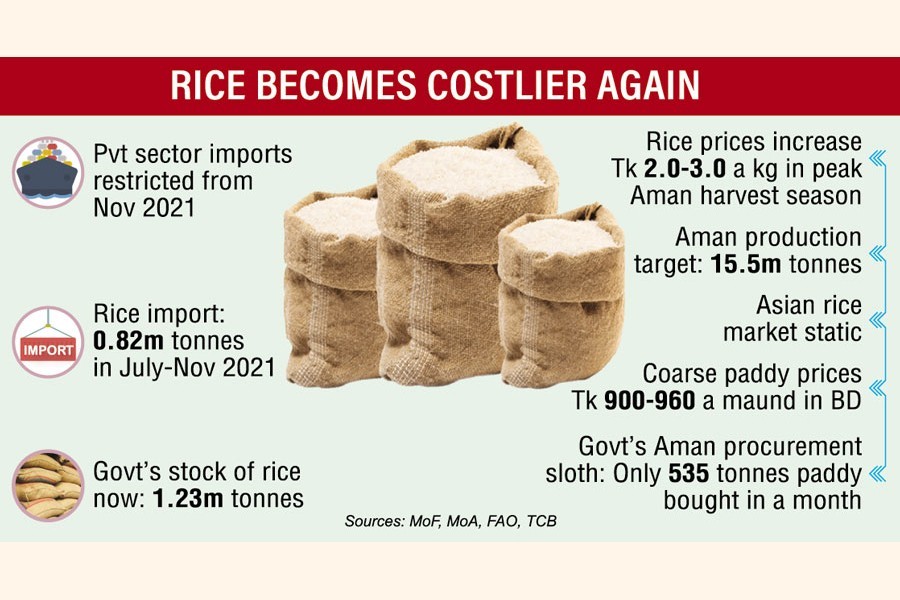 Prices of most of the rice varieties increased in the city last week despite the ongoing Aman harvesting season reached its peak, augmenting the sufferings of the consumers, especially the commoners.

Prices of medium and finer quality rice rose by Tk 3.0 per kg during the period and was sold at Tk 56-78 a kg at the city retail markets on Friday.

"Prices of rice have started increasing in the domestic market despite a prospect of a bumper Aman harvest, having a good public stock as well as an almost static price trend in the Asian market. The government should take it seriously", value chain expert Mohammad Moziball Hoque told the FE.

He said: "As the prices of rice were higher throughout the year, so behaviorally, it is encouraging the biggies like millers capitalise on 'the opportunity cost' maximally".

He said millers themselves would push paddy prices to a little bit high for their own interests. And this way the farmers could make some profits, he added.

"But a market equilibrium is needed considering the interest of the common consumers who comprise 60 per cent of the population," he said.

Authentic and quick data of rice production in every season should be disclosed to adopt timely import policy to tackle any kind of price volatility in the domestic market, he opined.

He also said public food stocks should be increased to its maximum level until the next Boro harvest season as the possibility of any next wave for the new Covid variant omicron exists.

He noted that the paddy market turned vibrant as millers were in a hurry to buy the grain to keep their business running for the next five months.

"But prices of coarse variety might rise to some extent with the end of Aman harvest season within the second week of January," he said.

However, higher prices of paddy has been impacting the government's grain procurement as only 535 tonnes of paddy could be purchased in the last one month against a target of 0.3 million tonnes this Aman season, said an official at the Director General of Food.

He said target for milled-rice has been set at 0.5 million tonnes while 25,000 tonnes of rice has been bought so far.

He informed that the government warehouses have a handsome stock of 1.23 million tonnes of rice now.

He noted that the poor consumers are struggling just to survive because of the rising trend of essentials' prices including staple rice, edible oil, fish, meat, egg and pulses.

The government should start open market sale of key essentials at subsidised rate to prevent further sufferings of a vast population of the country who experienced a massive decline on their income due to the pandemic.

Meanwhile, nearly 0.82 million tonnes of rice has been imported in the July-Nov period of this financial year of which government brought in 0.5 million tonnes.

Import of rice by the private sector has been restricted from Nov 1 last by the government to keep paddy market vibrant for the farmers during this peak Aman harvesting season, said officials.

However, the agriculture ministry was expecting a 15.5 million tonnes of rice output from this Aman season while harvest of above 70 per cent of land has so far been completed till December 2.

Major US airline CEOs warn 5G could ground some planes