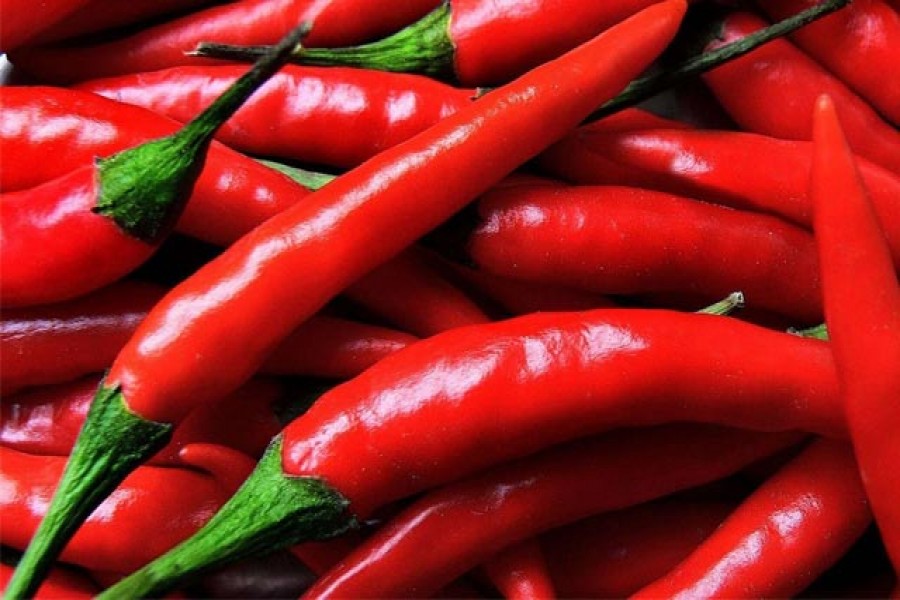 Red chillies (dry chillies) have become hotter with prices increased significantly by 80-90 per cent in last one and a half weeks.

Traders said surge in import costs resulted in such tectonic rise in prices.

Belal Hossain Litu, a grocer at Akhra Mandir area at Rayer Bazar, told the FE that prices of red chilli had been increasing for last two weeks almost everyday.

"I bought five kgs of imported red chilli from Moulovibazar wholesale market at Tk 1,750 on Monday which was Tk 1,000 in the first week of January," he said.

He said Bangladesh imports 60 per cent of its demand for red chilli mainly from India.

Belayet Hossain, a Moulovibazar-based trader, said different companies-- who sell packet chilli powder-- started buying a huge quantity of the spice from August last following a surge in prices in India which also made an impact on the local market.

However, Indian Express-- a daily of India-- reported that red chilli prices made a record high at Warangal district in Telangana state as new crop arrived.

Best quality red chilli namely 'Teja' variety was sold at Rs 185 a kg at the Enumamula agriculture market at Warangal district in Telangana, which is one of the biggest markets in the entire sub-continent.

Bangladesh produces 0.14-0.145 million tonnes of green chilli across the year and has a surplus output, said TM Rashed Khan, assistant director of the Department of Agricultural Marketing (DAM).

"But farmers are not interested in making the chilli dry as it consumes more time and needs uninterrupted sunlight," he said.

"As local farmers are reluctant about making red chilli, demand is met through import," he said.

He said farmers should be incentivised to raise production locally which could help avoid import of red chilli worth Tk 2.0 billion annually.

However, green chilli prices were almost static at Tk 90-110 a kg in the city retail markets.

Emphasis on submitting documents of imported goods within three days

MFIs can now provide up to Tk 4m collateral-free loan