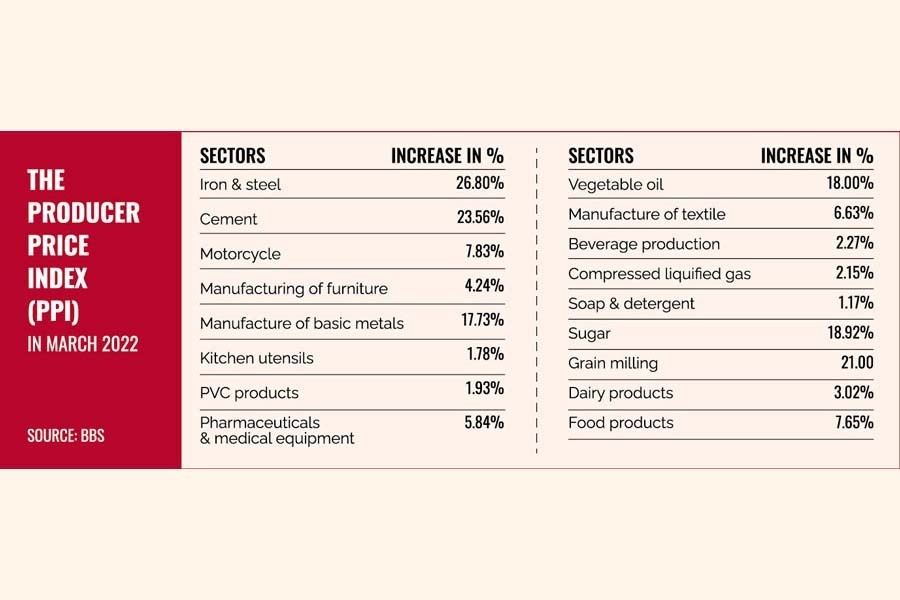 Producer price index or PPI which tracks the prices businesses pay for their goods and services rose in March at the fastest pace since records have been kept, hitting consumers below the belt.

Official statistical agency BBS unveiled such a picture of the goods and services market upturn in its latest release this week.

However, some producers paid for producing some products, including an essential kitchen item - salt -- that remained static in price indices.

PPI actually stands for inflation in terms of the producers of goods and services while the Consumer Price Index measures the prices paid by consumers.

The BBS prepares the index by taking data from leading manufacturers of major sectors to gauge market situation.

PPI is considered a forward-looking inflation measure as it tracks prices in the pipeline for goods and services that eventually reach consumers. The data are significant in that prices at the wholesale level feed through to consumer prices.

However, rod manufacturers paid nearly 27-percent higher than that of a year back followed by cement producers at approximately 24 per cent.

Producers say that the wholesale prices have been rising at a brisk pace since the pandemic recovery due to supply-chain disruptions. They claim freight has increased to a record high. However, the shipping cost is gradually decreasing especially after US President Joe Biden levelled sharp criticism at the global box carriers.

They also say the war in Ukraine has added fuel to the fire since February, pushing up the PPI to record highs.

In the meantime, some leading economists told the FE that this is a common matter for the PPI to rise at a time when global high prices of commodities and the country's currency depreciation are considered.

"The PPI shows the right picture as the global price levels have shot up sharply," says Dr M. Masrur Reaz, chairman at the Policy Exchange of Bangladesh, adding that the weakening of the local currency, Taka, also worsened the picture.

He says such PPI gives an early signal about the CPI inflation as the businesses pass on the burden to the consumers.

He notes that Bangladesh's import basket consists of mostly industrial raw materials and other capital machinery. "Our import payments show the picture…RMG raw materials also increased around 15 per cent."