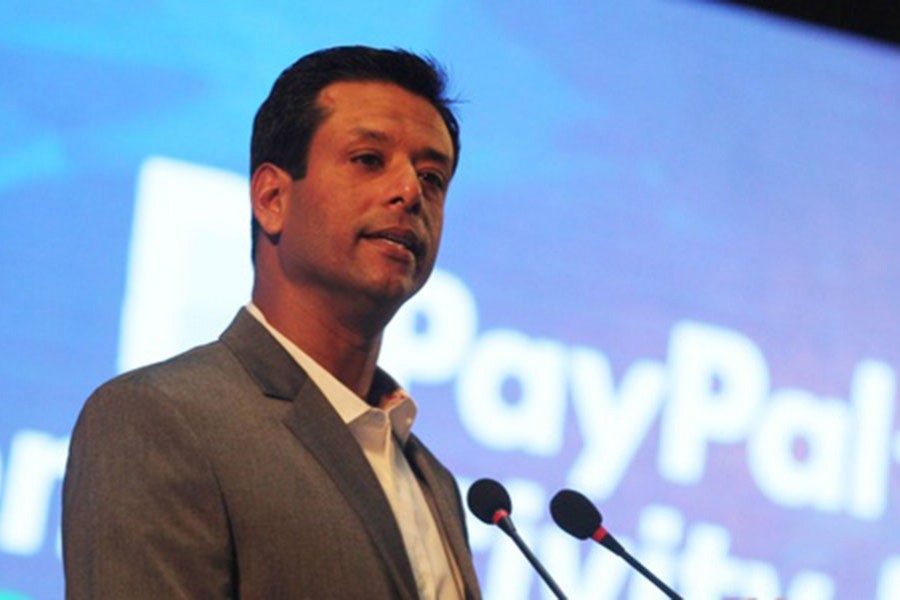 The PM’s ICT adviser Sajeeb Wazed Joy said he hoped there would be no more need for hundi or corruption in bringing money into Bangladesh from abroad with the official launch of PayPal’s Xoom services, reports bdnews24.com.

The son of Prime Minister Sheikh Hasina and her ICT adviser inaugurated the services on the second day of the ‘Bangladesh ICT Expo-2017’ at the Bangabandhu International Conference Centre in Dhaka on Thursday.

The 11.8 million Bangladeshi expatriates living abroad sent almost nearly $13 billion home in the previous fiscal year, he said. The amount sent home through hundi, a controversial fund transfer channel, could not be estimated, according to Joy.

Joy said he hopes the launch of the PayPal services, which would ease the transfer of money home, would stop the use of hundi and increase inward remittances.

“The remittances and freelance income that would be sent through hundi will now stop. It will now come through legal channels, cutting off scope for corruption. Those who run hundi are cheats. Now there is no possibility of money being stolen.”

Joy also addressed those who criticised the limited nature of PayPal’s implementation in Bangladesh.
The ability to send money abroad will be opened when Bangladesh’s economy can compete with those of developed countries.

“There has been some criticism that we have not made complete PayPal services available, that we can’t send money through it. This is not a failure of PayPal; it goes against the policy of Bangladesh Bank.”

The Awami League government has attempted to keep Bangladesh’s economy a ‘bit isolated’ from the world in an attempt to avoid the repercussions of recession in the global economy, said Joy.

“It is our policy that we cannot send money abroad freely. But it is under this government that individuals going abroad have been allowed to carry $10,000.”

“When Bangladesh’s economy becomes developed, when we can compete with any other country in the world, we will no longer have these currency restrictions.”

“Then we will have a free currency, with no constraints. But we are not yet there. For this reason, outbound currencies are not allowed under the law. But you can now bring in whatever amount you want. This system is available.”

The prime minister's adviser said the country's freelance IT professionals had faced various problems like three to seven days of delay in drawing the payment and paying 30 percent of the amount for the transaction.

"That's why the freelancers were demanding PayPal services and today these are launched in Bangladesh," he said.

According to him, money can be transferred using PayPal accounts within 40 minutes to two hours round the clock without any annual fees from now on.

He said he also checked if he could send money using his PayPal account to Bangladesh.

Joy also spoke about the government's plan for the financial sector as part of its 'Digital Bangladesh' scheme.

He said the government wanted to bring online payment system for government fees and utility bills. "These transactions will be made through mobile phones."

Earlier the private sector was tasked with the matter, but failed, he said.

"The ICT Division will take the step now. We will hand a mobile financial system to the Bangladesh Bank. No one will be able to embezzle allowances. There will be no scope for bribery," he said.

He assured the internet users of further slashing the price for data use.

He noted the government took a programme, Info Sarker-3, to make 2,600 unions fibre optic cable connected. "The project will end after one and a half years," he said.

The prime minister's adviser also said he sat with state ministers, BTRC chairman and representatives of mobile phone operators for around two and a half hours on Wednesday and discussed 4G licence auction.

He said 22 out of 24 problems were solved. "The remaining two problems are related to the price. Now the bidding is under way. I've demanded expansion of 4G in urban areas within this year."

He claimed that he fulfilled the promises he made personally.

State Minister for ICT Zunaid Ahmed Palak and Bangladesh Bank Governor Fazle Kabir, among others, were present at the programme.