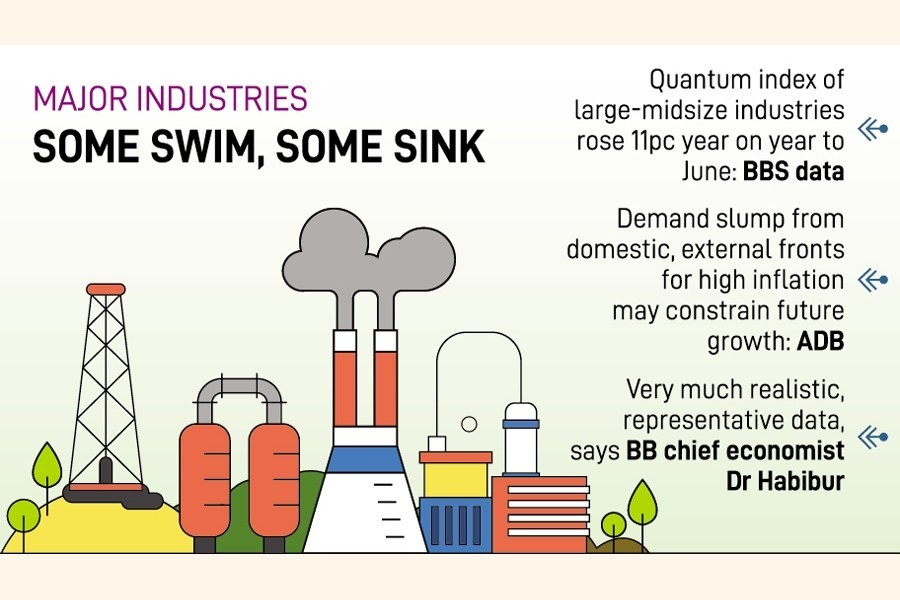 Overall output of Bangladesh's large and medium industries surged, propelled by export-propped clothing sector, but a large number of others saw a slump as per latest data.

Many believe the country has been reeling from the impact of the Ukraine war hot on the heels of pandemic covid shocks which disrupted the supply chains.

They single out the clothing sector as having the largest weight on the chain of production because of its leverage from export trade, and that's why any change impacts the productivity-related index.

Such a picture is clear from the Bangladesh Bureau of Statistics (BBS) report on the quantum index of large and medium industries.

The index, based on quantity units of goods such as number or weight, increased over 11 per cent last June over the same period a year earlier.

The manufacture of wearing apparel has the biggest weight of nearly 35 per cent out of 100. And its quantum index increased by 45.35 per cent as of June 2020 over the same period a year back, according to the BBS statistics, posted recently.

But, the second weight-holder of the index ---manufacturing of textiles--- dropped 12.25 per cent in the period under review. Textiles have over 14-percent weight--or the second biggest weight given its sizes, output, and employment.

Manufacture of food products, the third key category in the index, declined by nearly 15 per cent. Its weight in the index is approximately 11 per cent.

The fourth-largest industry is the manufacture of pharmaceuticals and medicinal chemicals, as per weight distribution, fell marginally over 2.0 per cent in the period under review.

The manufacture of leather and related products dropped nearly 19 per cent in the reporting period over June of 2021.

However, the manufacture of beverages having less than 1.0-percent weight in the index surged significantly to nearly 49 per cent year on year.

Paper and paper products also surged 44.56 per cent in the reporting period. It also accounts for less than 1.0-percent weight.

The manufacture of rubber and plastic products increased 21.26 per cent.

The national data-collecting agency reported that the output of furniture also surged by over 8.0 per cent in the period under review.

The agency reported that the provisional quantum indices of large industries for June 2022, with the base year 2005-06, have been developed based on the latest data supplied by the source agencies.

"Since large industries contribute heavily to revenue collection and job creation, any change in their growth impacts government and business sentiments accordingly," it says.

The government is now pursuing austerity and the Bangladesh Bank has enforced strict import controls on some luxury goods. Both measures by many accounts may reduce the output in the months ahead.

However, a regional development bank says that the domestic demand may be lower alongside downbeat export prospect on the back of slow growth in advanced economies.

The government in its budget speech estimated the economy will grow by 7.5 per cent. But the latest report by the Manila-based Asian Development Bank lowered it to 6.6 per cent.

The ADB presumes the domestic demand may be slower in the current fiscal year and there may be weak demand for exports from the advanced economies, dogged by high inflation and fuel shortages.

Chief Economist of the Bangladesh Bank Dr Md Habibur Rahman says, "This is very much realistic and representative data."

He found apparel growth almost similar to that of shipment figures.

Overall growth of 11 per cent is very good considering the covid shocks that had disrupted the global and domestic supply chains significantly, he told the FE.

Dr Rahman noted there was a significant rise in the output of beverages as high humidity levels due to the climate change might be the push.

"The presence of humidity level is now high and people drink beverages under the discomfort situation and its prices remained almost same for long," says the BB chief economist.