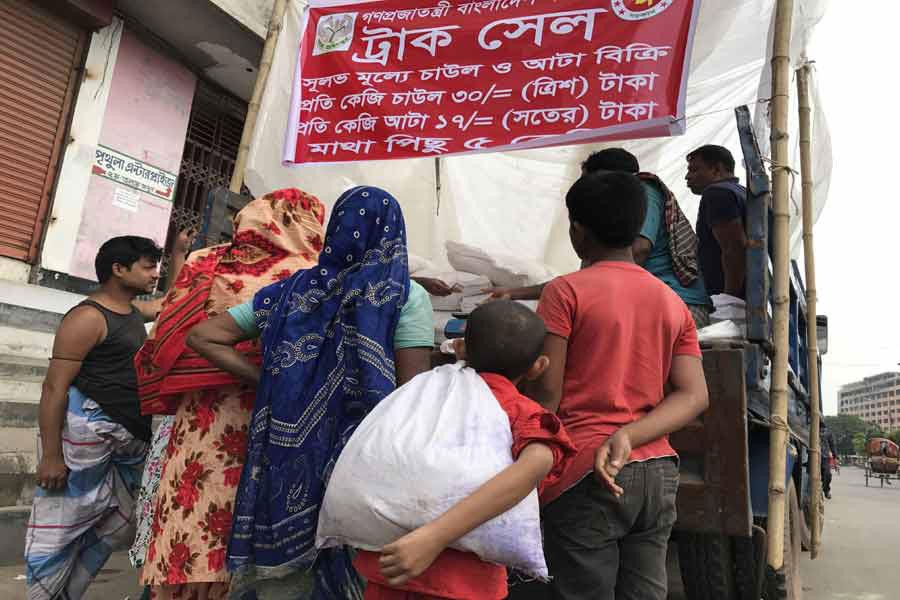 A move is underway to raise dealers' commission on open market sale (OMS) of rice and wheat to help curb malpractices in sales by authorised traders, sources said.

The food ministry has sent a proposal to the finance ministry, seeking its consent to raise dealers' commission to Tk 2.0 per kg for both OMS rice and wheat, they added.

Presently, rice and wheat are selling at Tk 30 and Tk 17 per kg respectively at consumer level, according to the food ministry data.

Now the warehouse prices of OMS rice and wheat are Tk 28.50 and Tk 16 per kg respectively.

At present, dealers get Tk 1.5 and Tk 1.0 as commission on sale of rice and wheat respectively. But they will get Tk 2.0 as operating cost for selling of both rice and wheat per kg if the proposal is finally implemented, a food ministry official said.

In this regard, the food ministry has recently sought consent from the finance ministry, he also mentioned.

Earlier, the Directorate General of Food has requested the food ministry to take necessary steps to increase dealers' operating profits, he added.

Dealers are passing hard time due to a lower rate of operating cost. They cannot run their business properly due to various reasons including high transport cost, handling cost, shop rent, labour wages etc, said a senior official of the food ministry.

Besides, a good number of dealers get involved in unscrupulous practices to meet their operating costs, he added.

"We have taken the move to increase dealers' commission on OMS rice and wheat to help check malpractices by authorised dealers and make their trade more viable," Director (supply, distribution and marketing) of Directorate General of Food (DGF) Kazi Nurul Islam told the FE.

The government will have to provide more or less Tk 1.50 million to dealers every day if new commission rate is offered to them, he added.

Besides, some 38,000 tonnes of rice and 89,000 tonnes of wheat are now waiting for unloading.
There are 2,105 OMS dealers across the country, according to the DGF data.

The initiative to increase dealers' commission has been taken to curb unscrupulous practices by a section of dealers in the country, officials said.

However, the government is now considering selling boiled rice soon under OMS programme following a lukewarm response from the consumers to buy white rice.

The Directorate General of Food (DGF) has been selling white/non-boiled rice and atta through open market sale (OMS) in the capital and across the country since September 20, 2017.

Only 76 per cent of 1,000 kilogrammes (kg) of white rice allocated to each dealer is being sold every day.
So far only 45,000 tonnes of non-boiled rice have been sold since the start of selling rice (non-boiled) under OMS programme, according to DGF office.

But most of the consumers are reluctant to purchase white rice as they are not used to consuming it, market insiders said.

"I sold non-boiled rice (white rice) to only 70 consumers until around 4:00 pm today (Monday)," a salesman of an OMS truck at Fakirapool in the capital told the FE.

Each dealer (truck) is selling non-boiled rice and atta at Tk 30 and Tk 17 per kg respectively.

Rice prices have gone up over the last few months due to flood and rains in different areas of the country recently that have damaged crops. Coarse variety of rice is being sold between Tk 48 and Tk 50 in the retail market while prices of other varieties ranged from Tk 55 to Tk around 60 per kg.

The DG food office said the price of OMS rice is cheaper than that of the retail market price.

When asked whether they have any plan to sell boiled rice, the director general (DG) of DGF Md Badrul Hasan told the FE that they will start selling boiled rice after the present stock of around 150,000 tonnes of non-boiled rice ends.