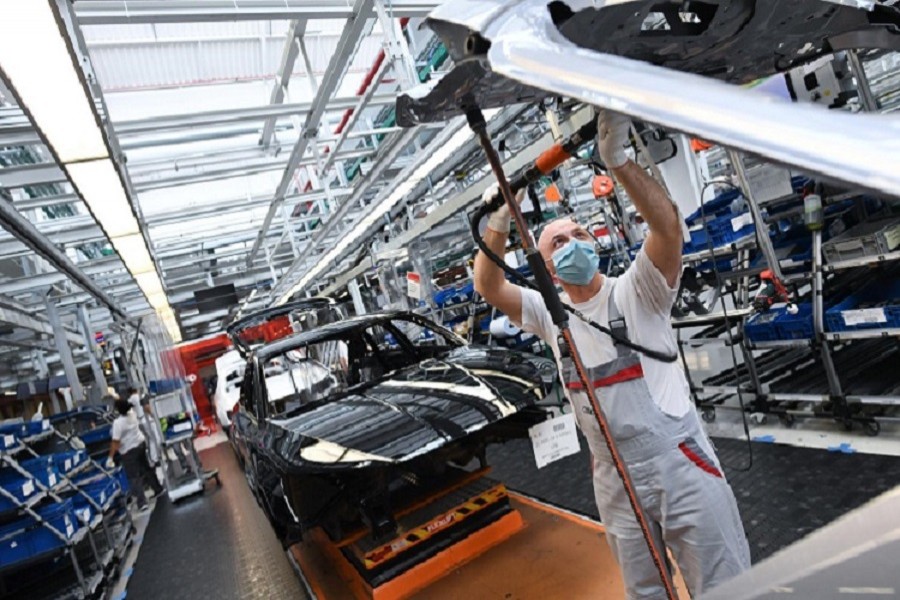 An employee works at the A3 and A4 production line of the German car manufacturer Audi, amid the spread of the coronavirus disease (Covid-19) in Ingolstadt, Germany, June 03, 2020 — Reuters/Files

Orders for German industrial goods rose by 10.4 per cent in May, rebounding from their biggest drop since records began in 1991 the previous month, data showed on Monday, as demand picked up after lockdown measures to fight the coronavirus were lifted.

The increase was weaker than a Reuters forecast for a rise of 15 per cent and the Economy Ministry said a return to pre-crisis levels will be slow even though the economy is recovering.

The Statistics Office data showed that domestic orders rose by 12.3 per cent while orders from abroad were up 8.8 per cent.

The double-digit increase in the headline figure was mainly driven by a 20.3 per cent rise in capital goods, including a 44.4 per cent surge in the automotive sector.

“The orders data signal that the manufacturing sector recession has overcome its low point,” the Economy Ministry said. “But the low level of orders also shows that the recovery process is far from over.”

Order intake was 30.8 per cent lower than in February, before lockdown measures were imposed to slow the spread of the coronavirus.

Germany has withstood the crisis better than most of its neighbours, suffering relatively fewer deaths from the virus. Its economy has also weathered the pandemic better, partly because it let factories and construction sites remain open.

The government is helping the economy weather the crisis with massive rescue and stimulus packages, including rolling out short-time work, a form of state aid designed to encourage companies to keep employees on the payroll during a downturn.

Still, the government expects the economy to shrink by 6.3 per cent this year, its worst recession since World War Two.

“Today’s industrial orders data brings two important messages: the lifting of the lockdown measures has brought V-shaped surges in activity but the return to pre-crisis levels will not be easy,” said ING economist Carsten Brzeski.