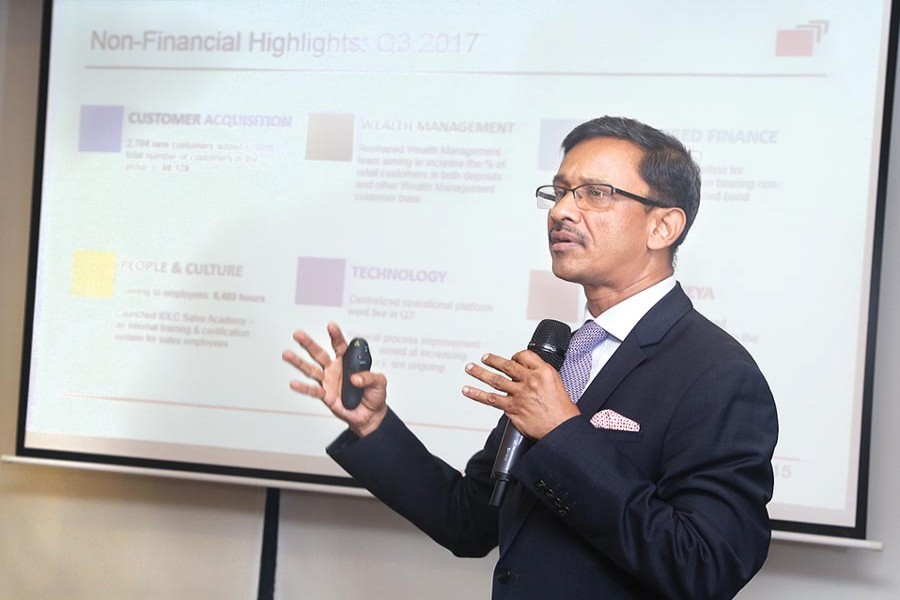 Managing Director of IDLC Finance Arif Khan disclosing the financial statement of Q3 in the city on Tuesday.

IDLC Finance has posted 18.35 per cent growth in earnings for the period January-September, 2017 compared to same period of the previous year.

The company's managing director Arif Khan Tuesday unveiled the company's quarterly statement with an expectation of continuing momentum and delivering the best possible results to the shareholders going forward.

According to quarterly disclosures, the company's earnings per share (EPS) rose 18.35 per cent to close at Tk 4.90 for January-September last. The company's EPS was Tk 4.14 for the same period of the previous year.

The company reported net profit of above Tk 1.80 billion recording a substantial growth of 35 per for nine months of this year compared to same period of last year.

As per the report, the IDLC's annualised return on assets (ROA) and ROE (return on equity) has stood at 2.75 per cent and 22.75 per cent respectively.

"Our company has become able to achieve the highest ROA in the country's financial sector," Arif Khan said.

During January-September last, the IDLC acquired 8,563 new customers and grew the customer assets portfolio by 13 per cent or above Tk 8.34 billion with a loan book of Tk 70.61billion.

"The growth in customer assets was driven primarily by the SME loans, which experienced a healthy growth of 20 per cent in nine months," said the IDLC.

It said the SME loans currently have stood at Tk 31.31 billion comprising 46 per cent of the total loan book of the IDLC.

"Consumer loans also grew 11 per cent in the corresponding period to stand at TK 23.8 billion."

"The NPL ratio has come down to a tolerable level because of professionalism of efficient management," Arif Khan said, adding that human resource is the top priority of the IDLC Finance.

The company's operating income went up by 29 per cent year on year to above TK 4.86 billion.

"The growth in operating income was driven by healthy investment income as well as increase in net interest income and fee income."

Khan also said the IDLC has undertaken several initiatives to improve in all areas.

"We are also trying to build a better financial brand along with expanding operation in the outskirts of the country," said the IDLC's managing director Mr. Khan.

According to another disclosure made through Dhaka Stock Exchange (DSE), the board of directors of IDLC has decided to purchase a land measuring more or less of 20 katha 14 Chhatak located at 153 Tejgaon Industrial Area for construction of IDLC's future Corporate Headquater at a cost of Tk. 579.8 million excluding the cost of registration and other related expenses.