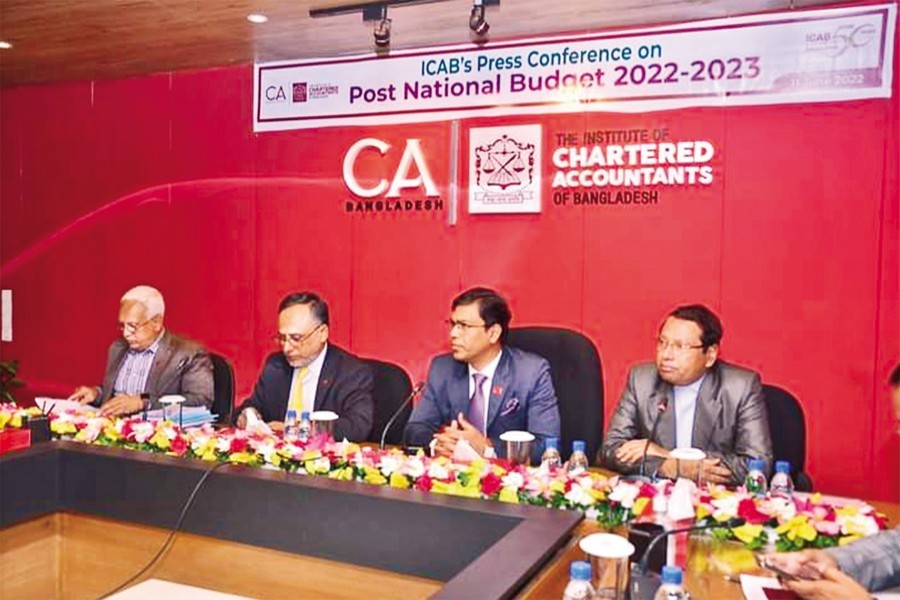 The proposed budget is very timely and it allocates a staggering sum for infrastructure development among other measures, they say.

The high-ups made the observations at a press conference on the Institute of Chartered Accountants of Bangladesh (ICAB) premises on Saturday to share their views on the proposed 2022-23 budget.

An existing joint collaboration between the CAs and the National Board of Revenue (NBR) will help the country attain the revenue collection target, they maintain.

The ICAB also hails the proposed budget for turning the spotlight on the role of the document verification system (DVS), which is an ICAB-NBR joint effort.

Addressing the event, Mr Hossain says finance minister has presented in parliament a colossal but time-befitting budget, which is 15.2 per cent of the country's gross domestic product.

"Despite challenges, we believe it'd be possible to implement this timely budget under the leadership of Prime minister Sheikh Hasina," he adds.

Recognising the need to widen the tax-GDP ratio, Mr Hossain says his organisation believes the use of DVS will help attain revenue collection target.

The system will also ensure transparency and accountability in the financial sector, he adds.

According to data available, the tax-GDP ratio in Bangladesh hovers around 10 per cent which is significantly lower than that in neighbouring nations.

Mr Hossain also expresses gratitude to the government for accepting most of the ICAB's proposals regarding the Income-tax Ordinance-1984, Income Tax Rules-1984, and VAT and Supplementary Duty Rules-2016.

"Twelve per cent tax on all export-oriented industries and 10-per cent on green ones will help diversify export," the ICAB chief says.