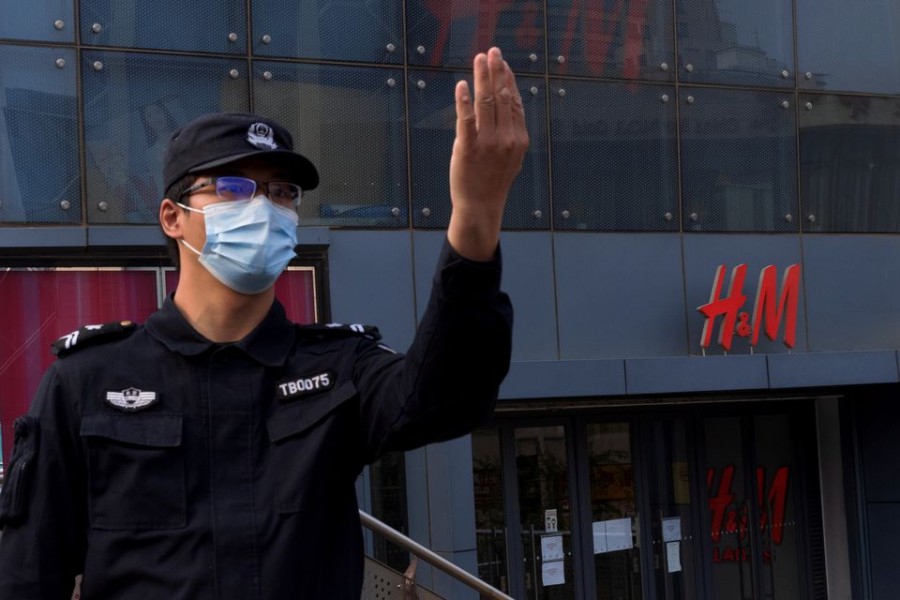 A police officer calls to colleagues for backup outside a store of the clothing giant H&M in a shopping area in Beijing, China, April 9, 2021. REUTERS/Thomas Peter

The reopening was first noticed by Chinese internet users and confirmed on Tuesday by a Reuters search of the platform.

It was not clear what prompted the reopening and H&M and Alibaba did not immediately respond to Reuters’ requests for comment.

Tmall and many other Chinese platforms and apps scrapped references to the fashion brand when it was revealed that H&M had promised not to source cotton from China’s far western Xinjiang region, citing concerns about human rights violations there.

UN experts and human rights organisations estimate that more than a million people, mostly Uyghurs and other Muslim minorities, have been detained in a huge system of camps in Xinjiang in recent years. China denies all allegations of abuse.

It was one of many Western brands to get caught up in the cotton controversy in Xinjiang last March and was disproportionately hit as one of the first to be targeted by netizens on Chinese social media.

While other brands, such as Nike, Adidas, Burberry, and Converse, saw celebrities cut ties over their public pledges not to use Xinjiang cotton, H&M was the only brand to see its online identity disappear to such an extent in China.

As of March 2021, H&M can only sell online in China via its own website and a mini-programme on WeChat, but is not available or searchable on major third-party platforms such as Tmall or JD.com.

In June, H&M closed its flagship brick and mortar store in Shanghai, hurt by consumer reaction to the controversy over Xinjiang cotton and the lockdowns in China’s commercial capital.

H&M entered China in 2007 with the opening of that three-storey flagship store and expanded rapidly. It had more than 500 stores in mainland China at the beginning of last year, but its website currently only lists 375.