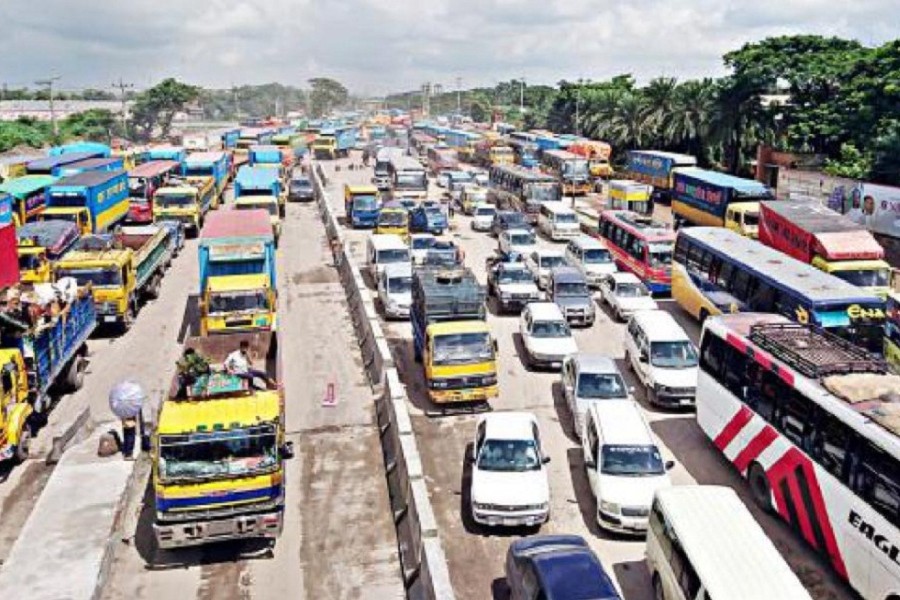 Heavy congestion on the Dhaka-Gazipur Highway has been causing loss of working hours and increasing cost of industrial units, including ready-made garment (RMG) ones, located in the adjacent areas.

"The nagging traffic jam on the Dhaka-Gazipur Highway, caused by ongoing construction project work, is making an adverse impact on RMG and other industrial units in the adjacent areas - by disrupting transportation of raw materials to and finished goods from the factories," said Bangladesh Garment Manufacturers and Exporters Association (BGMEA) President Faruque Hassan.

Gazipur is a major industrial hub, where a large number of export-oriented garment factories and other industries are located. Regular commuters are also undergoing immense sufferings due to acute gridlock every day.

Commuters, including workers, entrepreneurs, buyers and their representatives and officials working in garment factories along with other people have to wait for long hours on the road due to severe traffic congestion, Mr Hassan explained.

"As a result, a huge number of working hours are lost and a significant amount of money is wasted as additional fuel cost, while disruption in transportation of raw materials and exportable goods to and from the factories is adding to their production cost and time," he added.

The BGMEA chief made the observations at a meeting with Road Transport and Highways Division Secretary Md Nazrul Islam at the latter's secretariat office in the city on Tuesday.

BGMEA vice presidents Shahidullah Azim and Md Nasir Uddin, and Dhaka Chamber of Commerce and Industry (DCCI) former president and managing director of Shasha Denims Shams Mahmud, among others, were also present at the meeting.

The BGMEA president urged the government to complete the project of constructing the Dhaka Airport-Gazipur Road in the shortest possible time to get rid of traffic jam, and make the highway completely usable for commuters.

Gazipur is a major industrial hub that accommodates at least 1,100 textile and RMG units as well as more than 1,000 other factories, according to Industrial Police data.

Ashulia-Savar is also a major industrial zone with many garment factories, which have created employment of a large number of people in the area.

The BGMEA leader also requested the government to start implementation of the Dhaka-Ashulia elevated expressway project after ensuring an alternative way for commuters and vehicles to use during the construction work.

He urged the government to speed up executing the bus rapid transit project, and complete it in the quickest possible time to ease traffic congestion on the Dhaka-Gazipur Highway.

Mr Hassan also called for immediate steps to keep the highway free from random on-street parking as well as makeshift shops and markets, saying such illegal occupations narrow down the existing road and also cause traffic congestion.

The BGMEA chief also sought cooperation and support of the Gazipur City Corporation and the Bangladesh Police in this regard.