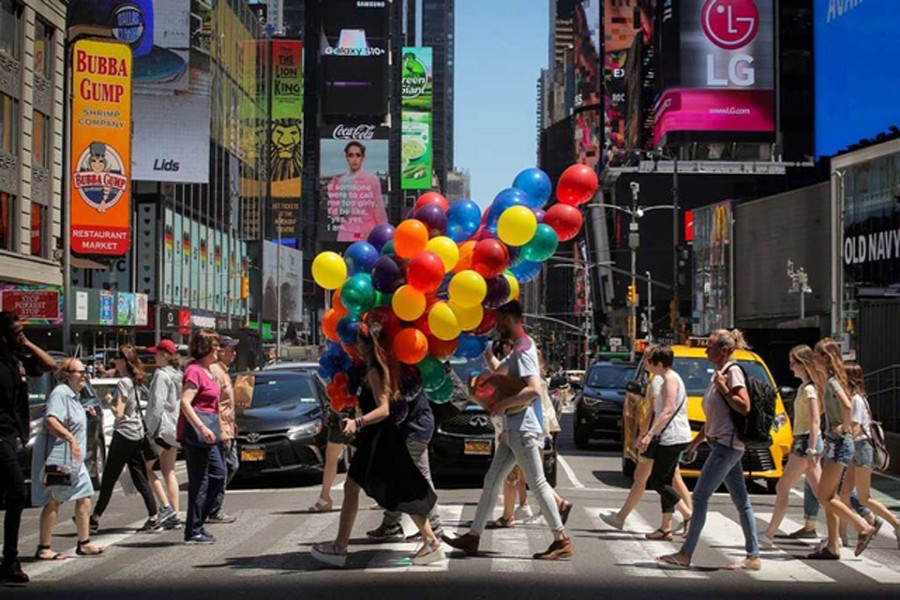 A woman carries a bunch of balloons through Times Square in New York, US, June 26, 2019. REUTERS

The global advertising industry is expected to grow 8.4pc this year, despite ongoing geopolitical situations around the world and fears of a recession, a report on the sector said on Monday, reports Reuters.

That figure excludes the impact of US political advertising, which is on track to reach $13 billion in revenue this year, up from $12 billion in 2020, the report from ad agency GroupM, a unit of WPP PLC showed.

The advertising market, which typically tracks the broader health of economies, is settling after experiencing highs in 2021, when it was boosted by strong economic recovery and personal consumption.

Sources of growth in 2022 include increasing numbers of new small businesses, which are likely to advertise at higher levels than the business they are replacing; venture-funded “new economy” advertisers seeking growth; and Chinese-based marketers advertising abroad, the report showed. The expected deceleration of e-commerce and interest rate hikes will be a drag on growth.

“Although the overall economy and environment is more negative now than it was in December, broadly speaking, people in our industry and I think many pundits are overly negative relative to the reality of how the overall economy is faring,” said Brian Wieser, the president of business intelligence at GroupM, in a call with journalists.

The report forecasts ad revenue for pure-play digital platforms to grow 11.5 per cent in 2022, down from 32 per cent growth in 2021. Digital advertising on those platforms will represent 67 per cent of the industry’s total revenue this year, excluding US political advertising.

Television advertising is expected to grow 4.4 per cent in 2022, boosted by ad-supported streaming services such as Paramount Global owned Pluto and Fox Corp owned Tubi. TV advertising growth broadly is poised to flatten in the next five years. For many marketers, Alphabet owned YouTube will look “increasingly like a substitute to television,” according to the report.