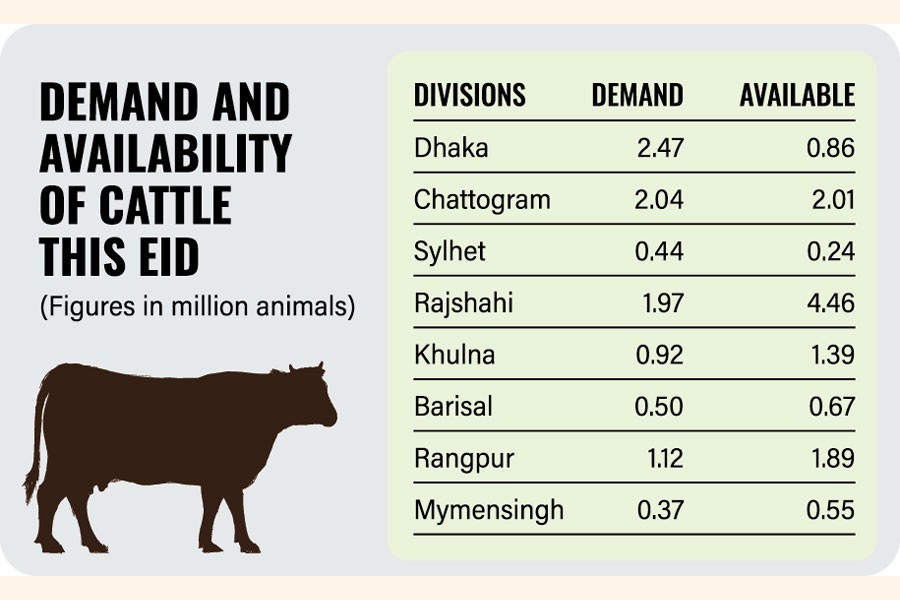 The ongoing flood has already affected some 6,662 cattle and poultry farms in 15 districts, which might cause further surge in animal prices during this Eid-ul-Azha festival, although the prices are much higher than those of last year, according to insiders.

The flood has severely affected the farms, having some 2.0 million cattle as well as 5.5 million poultry birds, causing a loss worth Tk 3.31 billion so far, according to the Ministry of Fisheries and Livestock.

The official data showed that the country had an availability of 12.12 million cattle against a demand for 9.7 million in the Eid-ul-Azha.

The flood in Sylhet, Sunamganj, Habiganj, Moulvibazar, Netrakona, Kurigram and other districts is set to push up cattle prices further, said officials.

An official at the Department of Livestock (DLS) said the flood has caused severe damage to the cattle farms in Sylhet, Sunamganj, Netrakona, Habiganj, Moulvibazar, Kurigram and parts of nine other districts.

Some 5,600 farms have been affected by the flood in Sylhet region alone.

"We are still counting how many cattle exactly died or went missing in the flood, but the number will definitely be a notable one."

Such loss might create a scarcity of animals in many districts, he added.

T M Rashed Khan, assistant director at the Department of Agricultural Marketing, told the FE that the cattle prices, especially those of cows, are already 25-30 per cent higher now than those of a year ago - amid a surge in feed costs.

Smooth transportation of cattle from surplus to deficit areas could stop surge in prices further, he opined.

Visiting the permanent cattle market in the city's Gabtoli area, the FE found many city dwellers buying animals even a week before the Eid - fearing further surge in cattle prices.

"I've come to buy animal much earlier to avoid any price surge," he said.

Imran Hossain, president of the Bangladesh Dairy Farmers' Association (BDFA), told the FE that some 60-70 per cent hike in feed prices and high electricity bills have caused surge in cattle prices.

Besides, loss of livestock due to the flood might further raise cattle prices.

He further said preventing extortion on the highways and waterways, managing smooth traffic movement of Dhaka, Chattogram, Sylhet and Mymensingh with other districts could minimise prices.

Fisheries and Livestock Minister S M Rezaul Karim said despite the damage of cattle in the north and north-east regions, there is no crisis or concern for the sacrificial animals in this Eid.

"We are taking measures, so that animals from other parts of the country could be reached to those areas at time."

He also said efforts are being made to provide incentives to the affected farmers in the flood-hit regions.

Following opening of the Padma Bridge, traffic movement from the southern region to other regions has become smoother. Pressure on the Jamuna Bridge has also lessened, which might help easy transportation of cattle from Rajshahi and Rangpur to other districts, he added.