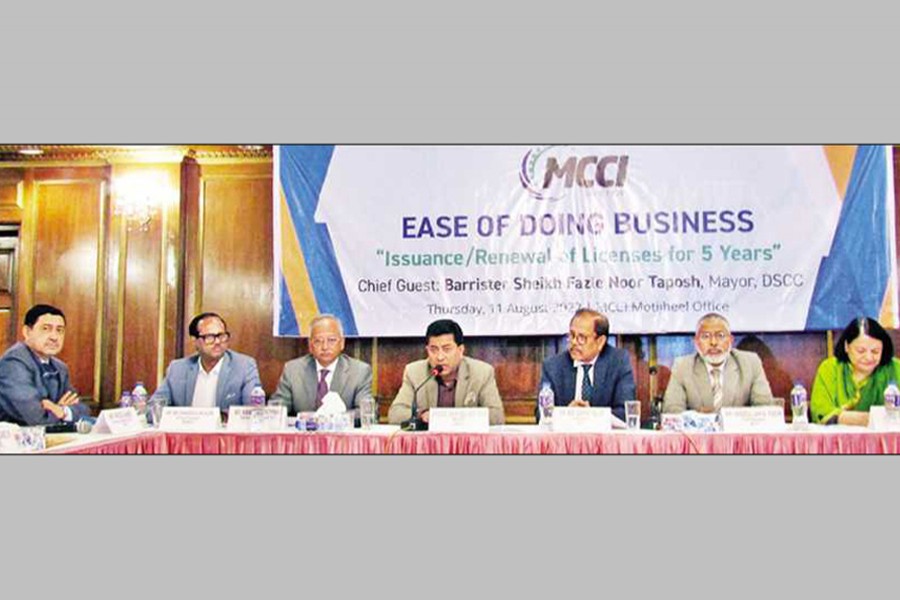 Mayor of Dhaka South City Corporation (DSCC) Barrister Sheikh Fazle Noor Taposh attended as the chief guest a discussion on 'Ease of Doing Business: Issuance/Renewal of Licences for 5 years' in the city on Thursday. Metropolitan Chamber of Commerce and Industry, Dhaka (MCCI) organised the event

Metropolitan Chamber of Commerce and Industry, Dhaka (MCCI) on Thursday called upon the Dhaka South City Corporation (DSCC) to extend the tenure of trade licence to five years instead of existing one year.

Leaders of the country's oldest chamber opined that the proposed extension in case of issuance and renewal of trade licence will help save time alongside reducing sufferings in getting the basic service.

Likewise, it will certainly play an important role in improving the country's business climate.

The chamber leaders placed the demand an event titled "Issuance/Renewal of licences for 5 years: Ease of Doing Business" held at the MCCI auditorium where DSCC Mayor Sheikh Fazle Noor Taposh was present as the chief guest.

Delivering a welcome speech, MCCI president Md Saiful Islam said local and overseas investors need to take various yearly licences like trade, environmental, department of inspection for factories and fire service department and the licences need to be renewed every year, which is very complicated.

It often takes too much time in collecting documents required to avail licenses, he added.

Shortly after the licence-related formalities end, preparations have to be taken for the renewal process for next year, he said, adding it is very tough for the businesses.

"The tenure of trade licence should be fixed for five years. It will not only save our time with lessening sufferings but also help the government ensure huge revenue in the first year of giving out licences. Trade will also be facilitated this way," he said.

"If DSCC agrees to do so, then we will push other agencies for this," he added.

As the coronavirus pandemic coupled with Russia-Ukraine war has created an uncertain environment across the world, the country needs to make a good environment for trade and investment to strengthen the economy, he also said.

Speaking as the chief guest, DSCC Mayor Sheikh Fazle Noor Taposh expressed his solidarity with the proposal for extension of trade licence tenure.

"We have no objection to issue licences for 5 to 10 years. But the problem is we have to collect the AIT and VAT of the trade licences for the NBR. Can small or micro entrepreneurs pay the amount for five years at a time, which could be an issue," he said.

Because of the AIT and VAT, many traders do not come to get licence.

He also requested the MCCI leaders to check the trade licences of their members when their membership is renewed in the chamber body.

Palm oil price down by Tk 8 per litre, sugar price up Tk 6 per kg

RAKUB to borrow Tk 10b from BB refinance scheme